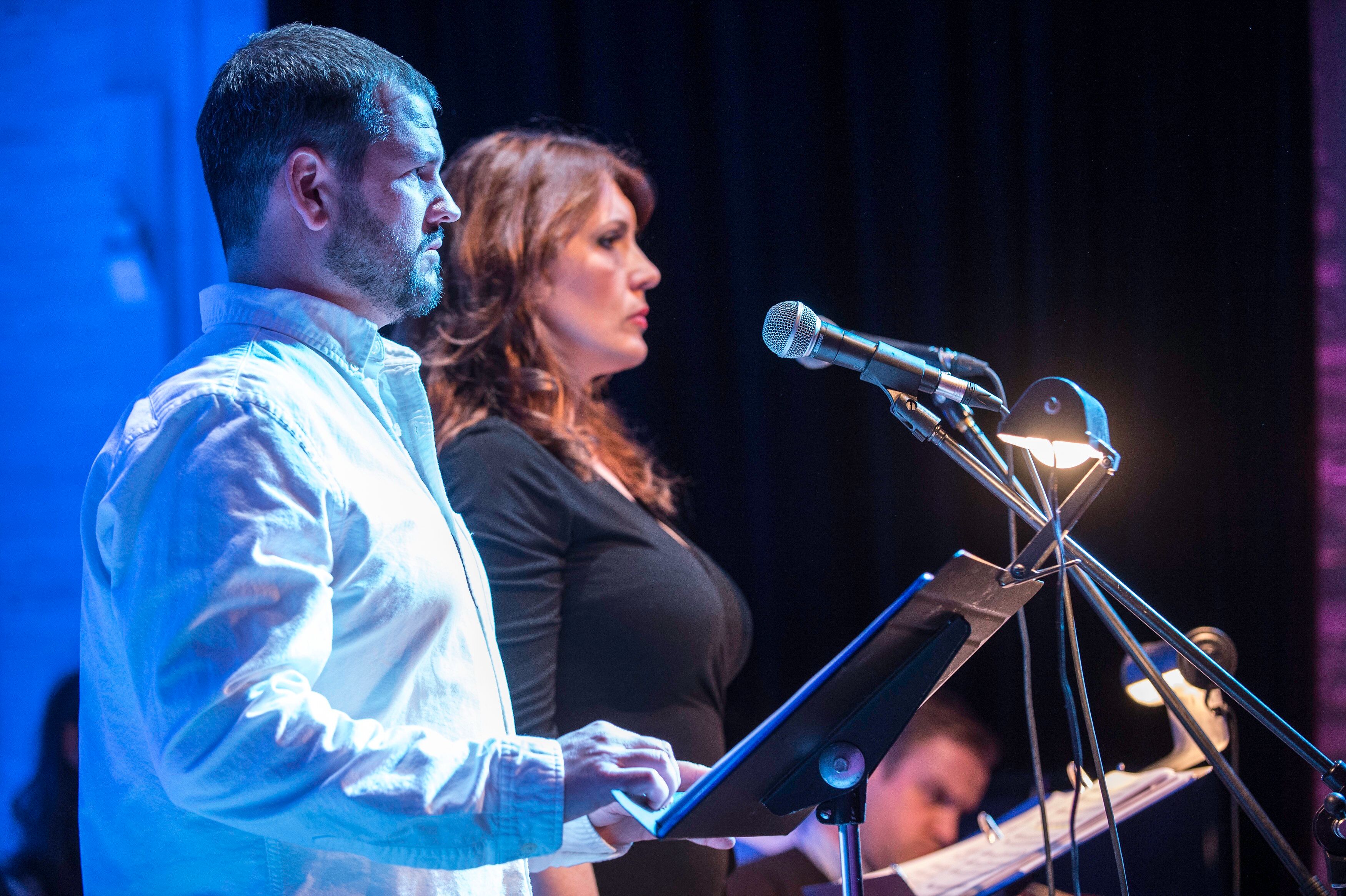 Historically, operas that choose to focus on love tend to privilege sweeping romances, richly orchestrated melodrama, couples separated by social mores, and, more often than not, a gloriously tragic finale. If you’re going to have several dozen musicians thrumming beneath your story of romantic entanglement, then it seems more than fair for your performances to match their grandiosity. But Tapestry Opera, having experimented with picking up staid operatic conventions and brazenly shuttling them together with more contemporary musical forms, has decided this year to try dropping modern love into the mix. The result is Tap:Ex Metallurgy, a two-part experimental work staged in the Distillery District’s Ernest Balmer Studio, which runs until this Saturday the 21st. The company has poached a few members of Polaris Prize-winning hardcore punk band Fucked Up to compose stripped-down (only eight onstage musicians), but musically ambitious, scores and librettos. The result is interesting, often energizing, and beautifully performed by the musicians and the two singers, but it’s hard to come away from the performance feeling like either punk or opera have been seriously broadened by this hybrid attempt.

The first section, “Metallurgy A”, is the more solemn and musically complex of the two pieces. Tenor David Pomeroy and Mezzo Soprano Krisztina Szabó play a couple who are grieving the recent loss of their daughter, sharing duets of despair and depression, before Szabó’s character becomes particularly isolated and is left alone on stage to sing an aria with the imagined spirit of her lost child. Both she and Pomeroy are beautiful singers, and composer Jonah Falco’s interweaving of their voices in the early part of the piece is especially effective. The operatic focus given to the couples’ despair as they work through their relationship and their grief is a strong hook, and librettists Mike Haliechuck and David James Brock have written a lyrically and emotionally adventurous text for the singers to work their way through. The second piece, “Metallurgy B”, is a briefer (fifteen minutes, tops) look at some key moments from a couple’s relationship, from meet-cute to weary tenth anniversary. With a reduced musical ensemble and a generally lighter story, the second half offers both Pomeroy and Szabó the chance to break out of shell-shocked mourning and have more fun with the material, raising banal tropes of contemporary relationships to Tristan und Isolde-like levels of romantic conflict. Highlights include Szabó magnificently trilling “You fucking asshole!” and Pomeroy abruptly picking up an electric guitar and strumming angrily while intoning beautifully. The two halves of the performance aren’t as tonally different as you might expect, with both pieces ending on a note of grave ambivalence. Still, “Metallurgy B”, composed by Ivan Barbotin and with a libretto by James Brock, is certainly the more joyous and experimental part of the evening, even if it feels more disconnected and randomly put together than “Metallurgy A”.

In terms of actual music, however, neither work comes off as particularly radical. I’m not well-versed in modern opera, but the sound created by the composers did not really seem unusual compared to other modernist works – – some sections, particularly the harsher, more jagged ones, even reminded me of John Adams’ work, something hectic and propulsive like Nixon in China. The eight musicians, made up of two violinists (Yoobin Ahn, Boris Kupesic), two cellists (Blanche Israël, Cory Latkovich), an electric guitarist (Mike Haliechuk), with Falco, on synth, drums, and piano, and Jordan de Souza also on piano, are all excellently of a piece, though the acoustics of the not-huge studio space caused some pitch-problems between them and the singers. They were however impressively aligned with some excellent lighting cues that played out around the entire room. But the score itself, while very effective and emotionally rich, sounded relatively conventional when set against the company’s mandate of pushing genre boundaries.

Indeed the music often felt less attention-grabbing than some of the staging choices, like violinist Kupisec leaving the stage after a passionate performance, as Pomeroy and Szabó decide to banish the idea of vengeance from their lives in “Metallurgy A”. His exit launches a gradual exodus of almost the entire eight-person ensemble, each of whom get up and walk off the stage as Szabó becomes more and more isolated throughout the first piece. It’s an intriguing move by director Mori that, while it sometimes felt in the small space of the studio more like a capital-C Choice than an organic part of the performance, is more boundary-pushing than much of the score, gorgeous as it is.

This isn’t to suggest that hardcore punk cannot itself be a sentimental, richly scored genre; listening to some of Fucked Up’s stuff before and after the Tap:Ex performance was a pleasant surprise, offering as it did songs of gravelly rage sung by vocalists Damian Abraham and/or Sandy Miranda, and backed by soaring electric guitars. One of their songs, “Queen of Hearts” even works in an operatic mode by having its lyrics be made up of a back-and-forth conversation between a young factory worker and a communist pamphleteer who quickly realize they’re falling in love (though their gentle words are of course screamed at one another in the Fucked Up rendition of the song). The emotional and sympathetic librettos and scores are therefore not as far outside of the Fucked Up wheel house as I’d anticipated, and ultimately, it actually starts to feel like they work too nicely within established operatic traditions. Maybe stage a version of the show with Damian Abrahams angrily covering both parts?