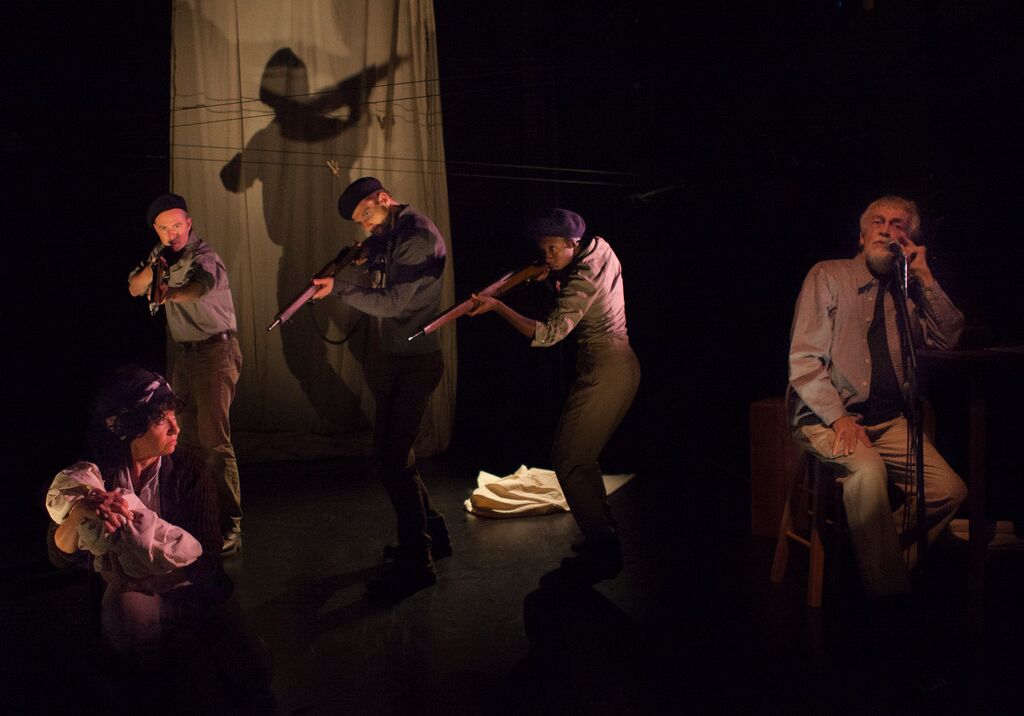 They Say He Fell: Examination vs. Rumination

They Say He Fell is a fascinating experiment, both aesthetically and narratively. Based on the stories of Toronto-based photographer Nir Baraket (who unfortunately passed away earlier this year), the play is a rumination on memory; how we remember facts versus our embellishments, and does it really matter which is which? The play circles around a single event, the death of Baraket’s older brother Yossi, a member of the Jewish militia in British-controlled Palestine at the hands of an angry mob.

This production was very successful for me in several ways. Steven Bush brings a lovely gravitas to the role of Nir, and his storytelling captivates for some truly beautiful moments. The acting company, under the direction of Jiv Parasram and puppet coach Michelle Urbano, created lovely stagings, fully engaging with the challenging and wonderful Theatre Passe Muraille Backspace. I have a personal interest in archival family photography and the power of those images on our imagination and sense of self, and this play was a multi-faceted examination of these ideas and on the power of family lore.

However, there were too many moments in the production that fell flat for me. The company struggled to constantly jump between scenes, getting tangled in props and set pieces that seemed unnecessary and sometimes incomprehensible. Some company members, in particular Virgilia Griffith and Christopher Stanton, were able to hold onto their characters firmly and take the audience with them through their many transitions, but the distinctions between characters, times, and places ran together too often overall. This was exacerbated by a large amount of the action being narrated, rather than performed. The multi-faceted approach to the text, which showed the audience the circumstances leading up to the death of Nir’s brother from several characters’ perspectives and two main lenses (what “should have” and “should not have” happened), loses its power when we do not know what the end of the story is. Suspense doesn’t really work when we know from the beginning that Nir’s brother will die, and the play spends a huge amount of time explaining the complex socio-political history of the region that relates to the cause of his death without fully unleashing its power upon the audience.

Ultimately, this play failed for me because it fell in the middle of the spectrum. At one end, theatre can be intensely political, which makes it personal (Angels in America is a great example, or Tony Kushner’s writing in general). A play can be intensely personal, which allows us to see larger political forces at work (see Hannah Moscovitch’s everything). But They Say He Fell spends too much time in sentimentality to be political and too long in politics to reach the emotional heights it could reach. If the choice had been stronger, both in the text and in the production itself, if the company took bigger risks, made accusations, pushed these characters and our assumptions about them as far as they could go, that is when this story could truly soar and force us to compare this story to the stories of today’s Israel and Palestine.