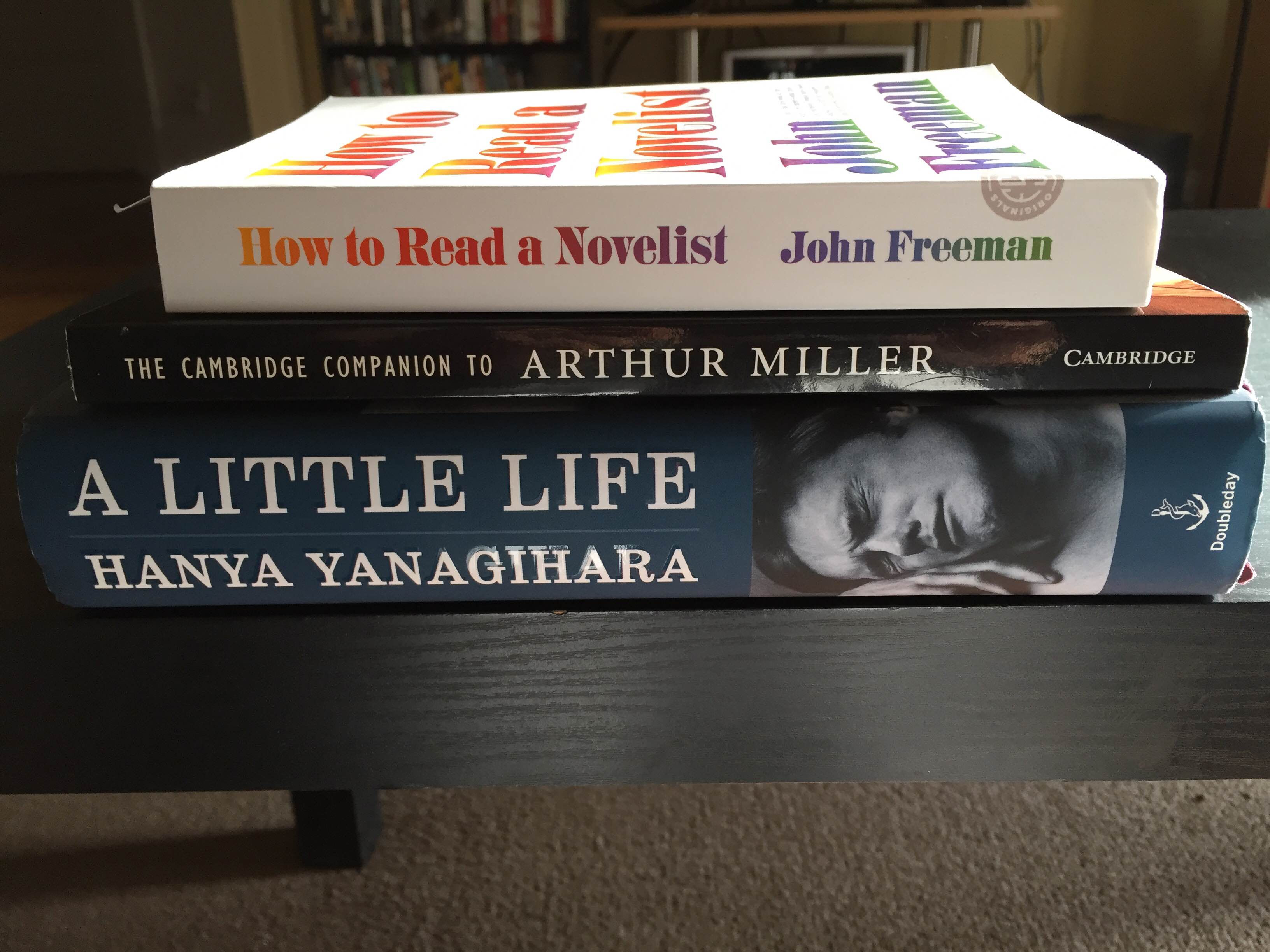 Greetings, humans. We have genre variety this month to keep your reading palate happy. Two novels, two biographies, a collection of essays about America’s most famous playwright, and a collection of sketches of some of the greatest writers working today:

Hanya Yanagihara’s A Little Life
I excitedly impulse-bought Yanagihara’s book after hearing it was long-listed and then shortlisted for the 2015 Man Booker Prize (to be announced October 13), and that The Atlantic called it the Great Gay Novel. The novel follows four male friends through three decades of their postgraduate life in New York City.

246 pages in, I am having some serious questions about how sexual and psychological trauma are portrayed in the novel. Is Jude St. Francis, the crux character around which everyone else revolves, actually a developed person, or is he merely a prop used to progress everyone else’s plot? I’m not sure yet, but my prognosis, sadly, isn’t good.

John Freeman’s How To Read A Novelist
I was lucky enough to attend an event at the Harvard Bookstore in which John Freeman (former editor of Granta, onetime president of the National Book Critics Circle) introduced the new journal he is editing, Freeman’s. Accompanied by James Wood, the New Yorker’s book critic, Freeman discussed the inaugural issue’s theme (“Arrival”), and spoke about how he collected unpublished pieces from writers like Haruki Murakami, Louise Erdrich, David Mitchell, Anne Carson, Lydia Davis, among others.

I bought the anthology, and a few days late I picked up Freeman’s earlier book, How to Read a Novelist. In Freeman’s words, these abridged interviews (conducted by him over the past decade or so) capture these fifty-five writers “trying to explain what it is they don’t want left out,” what may not have been said in their thousands of pages of writing. Who wouldn’t want to spend some time with Toni Morrison, Richard Ford, Günter Grass, Philip Roth, Doris Lessing, David Foster Wallace, Margaret Atwood, Edwidge Danticat, and Michael Cunningham? Freeman is a hardworking and very lucky dude.

The Cambridge Companion to Arthur Miller (edited by Christopher Bigsby)
This month marks the centenary of Arthur Miller’s birth, and to me the internet has been displaying an uncomfortable amount of silence about it. After checking online since September, I finally found a guide to some events going on to mark the occasion. I’m hoping to see some literary articles posted around October 17th, people.

In preparing for a review I wrote of New Repertory Theatre’s production of Broken Glass, a late Miller play, I picked up the Cambridge Companion to brush up on this member of the Holy Trinity of classic American playwriting (Eugene O’Neill and Tennessee Williams complete the triangle).

Garth Risk Hallberg’s City on Fire
You’ve probably heard some of the hype surrounding the most anticipated novel of the year. Sold for a reported $2 million dollars (likely the “highest North American Advance for a debut novel”), City on Fire is a 927 page novel set in 1970’s New York City.

Sound familiar? Not sure what the deal is with all these NYC-based, Dickensian doorstoppers becoming so popular, but I will play into this capitalistic marketing game and plunk down money to see what all the fuss is about. Who needs friends, a partner, or a life, anyway? See you in two thousand pages.

Jay Parini’s Empire of Self: A Life of Gore Vidal
Crazy excited about this one. The American writer and academic Jay Parini, known for biographical novels of Tolstoy, Melville, and others, will finally publish his authorized biography of Gore Vidal, the late, fine-eyebrow-ed master of wit.

Interviewed by Flavorwire, Parini makes his case about the advantages of having known Vidal so well, about being intimately familiar with his both his brilliance and his assholery.

Bonus: Ron Chernow’s Alexander Hamilton
Due to technological mishaps I would rather not discuss, the only album I had in my iTunes for the past week was the soundtrack of Lin-Manuel Miranda’s Broadway baby, Hamilton. You can do worse. My brain has been full of catchy hip-hop tunes about our ten-dollar founding father. I’m so curious: what was it about Chernow’s biography of Hamilton that sparked Miranda’s imagination so powerfully that he wrote a full-blown musical, one that has had such a successful run at the Public Theater and now on Broadway?

God knows if I will be able to get a copy from the library any time soon (I am 4th in the hold line, but it’s an 832 page book!). Then again, it’s not like I won’t be busy wrapping up my other mountain of reading. Happy October.