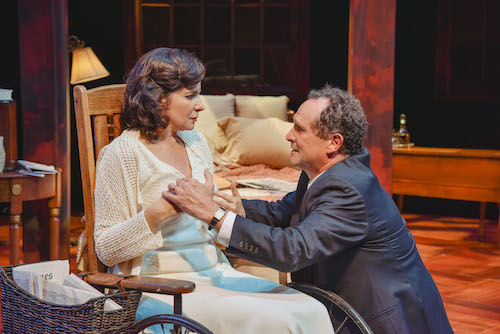 New Repertory Theatre seems to be the only company in the Greater Boston area that is acknowledging the centennial of Arthur Miller’s birth. They have wisely decided to veer away from Miller’s traditional masterpieces (All My Sons, The Crucible, Death of a Salesman, and A View from the Bridge) in favor of a later work that has never before been staged in Boston.

Broken Glass, written in 1994, takes place in 1938 Brooklyn. News reports of Kristallnacht, or the Night of Broken Glass, have spread across the globe. Shortly after seeing pictures in the papers of Nazis humiliating Jews on the streets of Germany, housewife Sylvia Gellburg becomes mysteriously paralyzed from the waist down. Her husband, cagey Jewish banker Phillip Gellburg, seeks the help of Dr. Harry Hyman to diagnose his wife’s inexplicable ailment. What ensues is the unraveling of a clinical case deeply rooted in cultural neuroses, marriage dynamics gone awry, and the paralyzing power of fear and humiliation.

The New Rep production, directed by Jim Petosa, is well-paced and smoothly staged, and it deliciously delves into the play’s multiple, interlocking themes. Although Sylvia (Anne Gottlieb) is the medical mystery, Phillip (Jeremiah Kissel) seems, at first, to be the more intriguing patient. Tightly wound, fidgety, brows furrowed and face impatiently scrunched, Phillip is obviously concerned for his wife’s wellbeing; he’s also very uncomfortable with allowing strange eyes to peer into his marriage. Those eyes belong to gentle Dr. Hyman (Benjamin Evett). Well-adjusted and confident, the handsome doctor finds himself increasingly drawn (professionally and physically) to his patient. To Hyman, Sylvia is a cypher: intelligent, yet restrained by her role as housewife, acutely sensitive to the horror that is brewing in Europe, yet unable to articulate what exactly is the “dark thing” inside of her causing her hysterical condition.

As this odd triangle contracts further and further, it becomes clear to outsiders that something very strange is going on. Sylvia’s sister Harriet (a straight-talking Christine Hamel) sheds light on the couple’s past for Dr. Hyman, but fails to understand why Sylvia is so worked up about Germany. Hyman’s wife Margaret (played by a vivacious, loud-laughing Eve Passeltiner) is very quick to see that Phillip needs as much medical attention as his wife does. Phillip’s condition is aggravated by his dealings with Stanton Case (an effortlessly elegant Michael Kaye), the WASPy, yacht-owning, Harvard-graduated bank chairman and president he works under. Case speaks like a gentleman but manages to wordlessly belittle Phillip, making sure to keep “his kind” in the proper place.

Broken Glass is a thematic smorgasbord. The play mainly concentrates on anti-Semitism (of both the Nazi and self-inflicted variety) and on perceived threats against masculinity, and the psychic and sexual damage these can cause. It also makes the very American observation that, in a way, “everybody’s persecuted…[it’s] what holds this country together.” There are also multiple allusions to children and childbearing, even embedded in the story arc. The play’s first act builds and builds in tension, leading to a series of intense (and occasionally draining) confrontations in act two. Hyman serves as a midwife to Phillip and Sylvia, guiding both of them through the laborious process of confronting their deepest fears, and bringing both of them to the brink of hysteria and catharsis.

The audience will have plenty to chew on when they leave. But the play’s thematic baggage occasionally risks alienating the audience; there’s only so much neurotic repression one can bear to observe in the space of three hours. Thankfully, this production alleviates the pressure with quick transitions and rich yet simple visuals. Jon Savage’s scenic design is elegant in its economic use of a few choice pieces of furniture to indicate a doctor’s office, a bedroom, and a banker’s office (settings swiftly presented thanks to the revolving stage). Petosa was wise to have the actors mime action in slow motion during scene changes, helping the audience ease into every subsequent scene smoothly. While I appreciated David Remedios’ sound design during those transitions in terms of music, the constant tinkling of broken glass felt a little literal-minded. I only found it effective when the glass shattering got furiously loud before the final scenes.

In the end, Gottlieb and Kissel are the main anchors of this show. The Gellburgs’ inability to communicate with each other, to confront painful truths, past shames, and continuous compromises, makes them apt rivals to the Kellers, the Lomans, and the Carbones we’ve seen strut the stage so many times before. New Rep has proved that Miller, in his later writings, was still able to skillfully probe America’s psyche through the humble prism of a single marriage. This triumph is an excellent way for New Rep to start their latest season, and a fine tribute to one of America’s greatest playwrights.

New Repertory Theatre’s production of Broken Glass is playing now through September 27th, 2015, at the Charles Mosesian Theater, Arsenal Center for the Arts in Watertown.