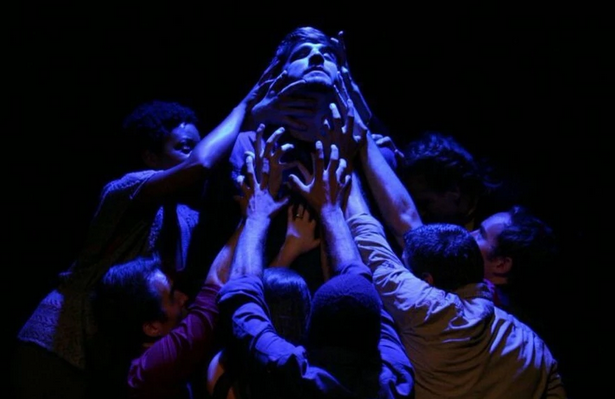 Due to a busy summer schedule, I was unable to attend much of the Midtown International Theatre Festival; however, I caught a few productions at the festival to kick off August.

Puzzle the Will
Hamlet has been reinterpreted in so many different ways that it is rare to come across a unique staging of this classic play. Despite that fact, The Hamlet Collective’s production of Hamlet makes a valiant effort to look at this pinnacle work in a new and fascinating way.

Starting with a stage littered with dead Danish royals, The Hamlet Collective’s production opens with Hamlet’s demise at the hands of Laertes – thrusting the audience into the climax of the play, before turning back time and going back to the beginning of story. From there, the ensemble pieces together sequences of the play to develop a complete picture of the entire narrative. Saved for the end of the performance is the famous “to be or not to be” soliloquy– an eloquent finale after the brutality of Hamlet and Laertes’ sparring match that leaves so many dead.

For anyone familiar with the play, it is quite jolting to see Hamlet presented in this way but also quite elegant. Scenes of the play that are interconnected are presented together, which brings a sort of beautiful focus to a single idea, theme, or critical plot point. For example, Ophelia’s dissent into madness is integrated with the scene in which gravediggers are hard at work building her final resting place after her suicide. This presentation, along with using a single actor to portray both Ophelia and a gravedigger, brought a startling poignancy to her off-stage death.

Another aspect of this production that distinguishes it is the use of, what I will call, gender neutral casting. By that, I mean that while Hamlet was portrayed by Lauretta Pope, Polonius by Caroline Gombé, and Ophelia but Keith Chandler, the actors continued to use Shakespeare’s original pronouns for each of the characters. This was a curious choice of direction and begs the question – why not change the sex of the characters? What is gained by leaving the pronouns unchanged? While a welcome departure from traditional casting, the changes do not always quite work. Lauretta Pope generally does a superb job with the role of Hamlet, aptly portraying the wide range of emotions demanded of any actor tackling the role with earnest; however, Keith Chandler at times seems uncertain of his portrayal of Ophelia. In some scenes, he adopts feminine qualities in voice and mannerism, and in others, including during the famous “get thee to a nunnery” scene, he has an aggressive physicality that is ill-fitting for the feminine character that he has created. That said, as a whole, Chandler’s performance is quite gorgeous – subtle and sympathetic.

Other performances of note include Zak Kamin who doubles as Laertes and Rosencrantz, an actor capable of imparting both the humor of Rosencrantz and the great anger of Laertes upon hearing of his sister’s death, and Aaron Lloyd who conveys as pure a soul (in a very charming way) as any Horatio that I have seen on stage. In totality, the ensemble of nine does a respectable job covering all of the roles and, aside from an occasional line or two that appears less than full contemplated, they work seamlessly together to produce the show. The staging of the play is quite ambitious and very effective, with smooth, fast-paced transitions between sequences and a striking interpretation of characters speaking beyond the grave. Dan Rousseau’s lighting design on the relatively barren stage exceeds expectations for a performance of this scale and nicely compliments the artistic interpretation on display.

Hamlet remains one of the most heavily produced plays of Shakespeare’s repertoire, yet, Puzzle The Will distinguishes itself as an ambitious re-telling of this well-known stage classic.

Pearl
Biographical musicals are all the rage this year, with recent Broadway shows depicting the lives of Alexander Hamilton and John Newton. Joining the collection is CB Murray’s new jukebox musical Pearl. Pearl Bailey was a masterful songstress with an extraordinary history that took her from Virginia to vaudeville to the war front and eventually to the Broadway stage and national television, and, while Pearl presents all of these milestones, it fails to give more than a cursory overview of an extraordinary woman’s life.

Recounting the life of Pearl Bailey, Pearl opens when the show’s namesake was just a young girl who, after being discovered on a small Virginia stage, left for the Big Apple with her brother, tap dancer Bill Bailey (who is credited with inventing the moonwalk). After Bill gets movie offers, he leaves Pearl to sing on the vaudeville and burlesque stages of NYC as he runs off to California. After a series of bad marriages, Pearl’s friend “Bob” shows up to offer her a gig in Europe performing in a brand new show that he is putting together – for the USO. Bob Hope is but one of Pearl’s famous friends and on-stage partners. After the war, Pearl performs with numerous celebrity musicians including Cab Calloway, Frank Sinatra, Andy Williams and, after an interesting courtship, her husband and noted jazz drummer Louie Bellson. Her personal life, however, is far from the perfect stage façade that she adopts. In addition to enduring abusive relationships, Pearl confronts extreme racism and hatred throughout her life both because she is black and, later, because she is in an interracial marriage. Her brother, Bill, washed out of show business and turned to drugs, mistreating his sister when she does not aid his habit and strongly disapproving of her marriage to Bellson. Yet, Pearl sings through it all.

Despite the promising premise, Murray falls victim to a common misstep when it comes to biographical plays. In attempting to do too much, Murray provides only a glimpse of many events in Pearl’s life without exploring any of them in a meaningful way. The show resembles a series of vignettes cobbled together because of their linear relationship to one another in time, rather than an exploration of who Pearl was or why her experience is one meriting exploration. Musical numbers are haphazardly tossed into the narrative, “name-dropping” Pearl’s many illustrious connections but rarely explaining how she gained those connections, how she utilized them, or how they helped her develop her career. Tucked away inside these scenes are nuggets of truth and glimpses of a life less ordinary (e.g., Pearl was involved in an all black staging of Hello Dolly!; Pearl confronted a reporter about her personal fight against racial prejudice throughout her career; Pearl had a complicated relationship with her drug-addicted brother), but each is granted only a few minutes of dialogue. Murray has a story to tell with respect to Pearl Bailey – unfortunately, the current book does not do justice to that tale.

Given the scale of this production, the creative team including Director Ben Harney, choreographer CB Murray, tap choreographer Charles Czarnecki, and costume designer Olive Pointer Harney do a commendable job staging a sultry period piece that demands the re-enactment of many famous moments in entertainment history, from USO tours to baseball stadium appearances to televised performances. Czarnecki’s tap choreography is exuberant (perhaps, at times, a bit too bombastic) but it balances nicely with Murray’s choreography and Ben Harney’s more subtle staging. Olive Pointer Harney’s costumes are charming and fun, appropriately reflecting the classy attire of the first half of the 20th century.

In addition to the creative team, the ensemble of Pearl does a satisfying job embodying the numerous celebrated personalities that sing and dance across the stage. Jennie Harney’s Pearl is soulful, fiery, ambitious, and, at times, appropriately weary and sad. Harney is a strong vocalist but also embodies the spirit and determination demanded in this sort of role. Stephen Dexter’s portrayal of Louis Bellson is humorously charming – he comes across as a genuine “good guy.” Unfortunately, the book fails to deliver much in the way of meaningful character growth for DeWitt Fleming Jr.’s character, Bill Bailey; however, Fleming does a respectable job with the tap dance numbers in the show. Tackling two particularly difficult impersonations, Sean Gorski and Thaddeus McCants had mixed success with their respective roles. Gorski’s Bob Hope is a pleasant, jovial fellow but his performance often felt cheesy. Also, Cab Calloway is certainly a flamboyant and eccentric character to impersonate and, while Thaddeus McCants’ turn as Calloway is entertaining, it is similarly exaggerated to hilarious (but unrealistic) proportions. To their credit, both McCants and Gorski’s vocals are solid.

As a piece in development, Pearl has promise with a strong narrative framework and memorable musical numbers; however, the show needs work in order to turn this Wiki-production into a meaningful analysis of Pearl’s professional contributions and personal challenges.