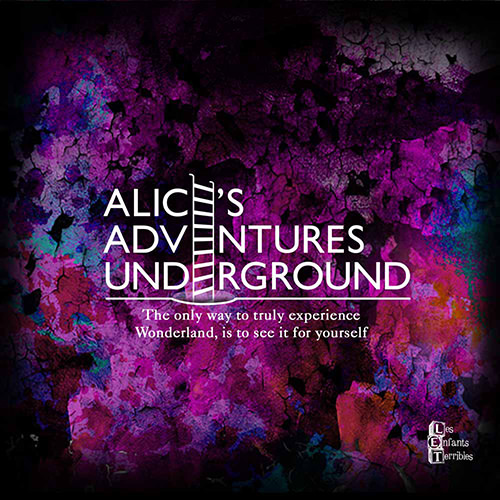 Alice’s Adventures Underground in the Vaults

Get lost down the rabbit hole, immerse yourself in the madness and enter the freakishly wonderful world of Alice.

Hidden away in the Waterloo Vaults, a beautiful and unique experience has been created as Les Enfants Terribles explore Lewis Carroll’s timeless novel. Alice’s Adventures Underground is an interactive theatrical piece consisting of a maze of rooms that the audience are guided around by the familiar characters of Wonderland. Each room showcases a different part of the story and before you have chance to reflect on the beautiful insanity that has just occurred you are whisked away to the next part of the adventure. It is a stylishly dark take on Carroll’s masterpiece that allows its adult audience to revisit a land that is a major part of so many childhoods.

The most impressive aspect of this show is its remarkably detailed and extravagant set design. Despite all the action being confined to the intimate vaults that exist under Waterloo Station, the creative team manage to produce some strikingly grand scenery across the many rooms you visit. Corridors covered with open books, a room of broken mirrors and a Turkish inspired tent are just a snippet of the mystical places you visit on the journey. While the fast pace and intensity of the production adds to the excitement, it almost feels a shame that there isn’t opportunity to really explore the areas more. On leaving, the first thing I wanted to do was go back and wander the set independently, stumbling across the characters myself rather than being confined to my group—something that I admit is maybe asking too much.

The first character you are introduced to is, of course, the White Rabbit who is primed and ready with the most important decision you have to make all night—do you choose ‘eat me’ or ‘drink me’. This interaction sets the tone of the evening and is a clever way to ease you into what you are about to experience. The audience participation is cheeky and charming but does not overstep the mark—something that is very important to me having grown up petrified at the thought of audience involvement. It is a credit to the actors that they are able to balance their already intense performances with the unpredictability of an audience. These interactions do, however, present the risk of bad manners from other attendees—on the night I saw the show there was a particularly loud member of the audience who luckily, unlike me, chose ‘eat me’, meaning our paths didn’t cross until the end.

The production flitters between Carrol’s original text and its own modern interpretation, giving appropriate time to both. We meet an updated Bill the Lizard for example: an incredibly enthusiastic and witty ‘leader of the revolution’ who is preparing to overthrow the Queen of Hearts. Contrary to this, when introduced to the Tweedles—in an oversized nursery no less—we are treated to a rendition of the ‘The Walrus and the Carpenter’, the original poem that the pair recite in the book. Puppetry is used to great effect for both the Caterpillar and Cheshire Cat which adds an extra dimension to their scenes and allows for some interesting use of space. While all the characters are beautifully strange and at times slightly unsettling, I could not help think that there is room in this interpretation to delve further into the peculiar and even chilling elements of the text.

Possibly the biggest issue with the show is its sound mixing. Occasionally it was difficult to hear the actors properly and because various scenes are occurring simultaneously in front of different groups, you can sometimes hear other actors over the ones you are currently watching. While not too distracting, this was fairly annoying given it is otherwise a brilliantly produced piece of theatre.

The highlight of the evening is sitting down for tea (or rather a tasty cocktail in a mug) at the Mad Hatter’s tea party. By far my favourite characters in Alice in Wonderland, the Hatter, March Hare and Dormouse are all perfectly strange, funny and captivating in their roles. They remain totally absorbed in their characters as they prance up and down the long table dictating nonsense, stopping only to invade the personal space of unsuspecting audience members. This is also the most impressively designed area of the production, situated in a long, overbearing archway fitted with a magnificent clock on one wall, a gigantic tea machine at the other end and an array of subtle features in between.

It is very rewarding to see a theatre group take a risk and present theatre in an innovative way, and it is especially satisfying when that risk pays off. This is a very clever show that allows you to forget everything else and just submerge yourself in the truly magical Wonderland.