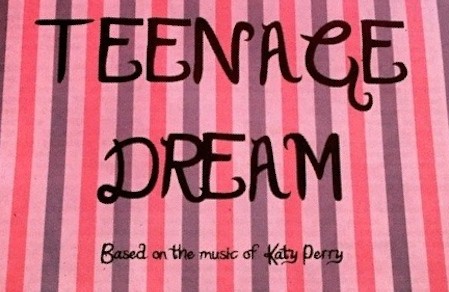 Katy Perry’s music is very theatrical and generally rooted in storytelling, two qualities that pretty much guarantee that one day we will see her songbook turned into a Broadway show. That Broadway show will be a commercial blockbuster production and she will be paid millions of dollars for the rights to the hit songs around which Rick Elice (Jersey Boys) or Ben Elton (We Will Rock You) or Catherine Johnson (Mamma Mia) will construct a pretty basic plot. The Katy Perry musical is not something that can ever realistically emerge from indie theatre but, since Trevor Coll decided to try his hand at writing one anyway, it was plenty of fun taking in the 2-nights-only production that felt sort of like a beta test for the big-money version that is surely on its way.

Coll’s plot is a sort of generification of Perry’s actual origin story (small town religious girl moves to LA to make it), and it thus suits the music pretty well. The dialogue tries too hard for its laughs, leaning way too much on shock jokes, but the characters are generally likeable and the immersive beach party tone of the show is a hit. The principal problem with Coll’s written efforts is that he changes the subject whenever he’s about to hit on anything more complex than “I’m not sure I can make it out here in LA!”.

Our heroine Katheryn (Claire Hunter, incredibly engaging and armed with a fantastic voice) moves into an apartment complex and immediately stumbles into a relationship and a great group of friends including Lindy, who is written as a show-stealing spark-plug but was underwhelmingly cast for this production (in all fairness, it’s nearly impossible to cast a character defined by their overwhelming star power, especially one who has to belt Perry’s deceptively demanding melodies). We see barely a moment of fish-out-of-water isolation before Katheryn’s story becomes about a love quadrangle more than anything else. The first guy in the mix is Woody, a simplistic bro who never defies a single low expectation. He’s played with infectious energy by Chris Beck but he’s never allowed the full use of Beck’s excellent tenor, perhaps a not-so-subtle hint to the audience that our affections should indisputably lie with Sam Moffatt’s simplistic dreamboat Hudson instead (Hudson, in contrast, is given the full benefit of Moffatt’s voice and guitar skills, easily picking up the slack for his awkwardly stilted acting).

The last man orbiting Katheryn’s strangely easy life is the simplistic villain (are you sensing a pattern here?) and this is where I found most of my frustration with Coll’s storytelling, in large part because of the strength of his own performance. He foreshadows the arrival of sketchy ex-boyfriend Jay well, letting his bad reputation precede his pre-intermission party crashing. But, as his showcase act two duet plays out, Coll’s engaging delivery begins to hint that something more complicated than “villain shows up to ruin budding romance” may unfold. It doesn’t. But it could, which gives me hope that Teenage Dream might be a small rewrite away from being really pretty great but it also gives me pause because Coll has left so much potential on the table in this incarnation. In the production’s most interesting scene, Hudson and Jay duet on “Unconditionally”, delivering the same words with contrasting tones and intentions. Moffatt does his bread & butter soulful singer/songwriter thing as he earnestly proclaims that he’ll love Katheryn unconditionally but Coll concentrates his own fantastic voice (the only other male voice we actually hear) with more intensity, turning the sweet lyrics of Perry’s power ballad into an enticing power play that’s as stealthily threatening as it is shallowly repentant. There’s more than one moment in this scene when it’s more than conceivable, it’s actually probable, that a girl as naive as Katheryn might easily backslide into familiar arms. I wanted to see that play out, get a glimpse into Jay’s damage and the root of his mind games, examine the appeal of the devil who really knows Katheryn over the unknown non-specificity of Hudson’s good-guy-ness. But instead Coll sends Jay cleanly into irredeemable villain territory mere minutes after “Unconditionally” (having dispensed with Woody just as swiftly) to leave Katheryn with no choice to make and no bittersweet loss to grapple with.

Lindy gets an improbable subplot manufactured mostly to find a place for “Kissed a Girl” but knockout singer Andrea Page is so strong as the receiver of said kiss that I forgave the story its out-of-the-blue-ness (again, there’s so much potential there if only Coll would dive deeper). A chorus of dancers and big production numbers suggest Teenage Dream was (appropriately) dreamt up for a larger stage. As engaging as Perry’s more subtle songs like “The One That Got Away” can be in an intimate setting (that reimagined duet is some of music director Moffatt’s best work), most of her hits simply require more resources than even the most ambitious of indie producers can provide (and Nicole Strawbridge is never anything if not ambitious). The recording-to-vocals balance here is understandable rocky for the big numbers (meaning anything requiring more than just Moffatt’s guitar) and some of the vocalists, even the good ones, don’t have the sort of big belt required to match the backing without a mic. But, for the most part, this production is able to capture the essence of what a Katy Perry musical could be. The book needs a rewrite in search of a bit more substance (and a few fewer groan-inducing jokes, including a too-meta one about Perry herself) but Teenage Dream mostly works because at the heart of it is Katy Perry’s vibrant and emotional songbook. Coll wrote and directed, and Strawbridge made it happen, but it’s Perry who did the heavy lifting.