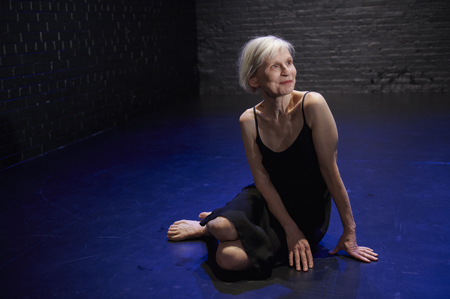 “I wanted to write about obsession, about creativity, about risk-taking, about love and loss,” playwright Carolyn Smart writes about Hooked, now playing at the Theatre Passe Muraille Backspace. Certainly all of these elements and more are present in this intimate montage of the lives of 7 women. This eclectic one-woman show exemplifies not only the potential in solo shows, and indeed the TPM backspace itself, but the narrative strength in ‘women’s’ stories. I use the inverted quotations here deliberately, because the collection of lives presented in Hooked betrays any kind of easy definition of a ‘female’ narrative, and by extension any easy definition of female identity. As such, what is offered to the audience in Hooked is a complex pastiche, a dance of identities that weaves together the complexities of women throughout history. (In discussing the diversity of representation, one might point out how all the women depicted were white. To which I would argue that I’m much more comfortable with the diversity they sought—one of many religions, ability, gender, class, and nationalities— than watching white actors attempt to ‘play race’).

Hooked is comprised of 7 monologues, each representing a different woman in history. Those die-hard narrative junkies just itching for a through-line will be disappointed: nothing clear links these 7 monolgues. Even by the end of the play, I was curious: how had they chosen these 7 women? What appears at first to be a play about women in love with monstrous men—Myra Hindley with Ian Brady, who committed the “Moors Murders”, and Unity Valkyrie Mitford, who was “besotted” with Adolf Hitler—soon becomes something else when we are introduced to writers of varying notoriety: Zelda Fitzgerald, Dora Carrington, Elizabeth Smart, Carson McCullers and Jane Bowles. What surfaces is the lives of women, told, as if they are ghosts—remembering, and indeed reliving their trials, loves and losses. As such, the lack of a singular overarching theme becomes the strength of the show, as we search for patterns. Some of are in love with men who hurt them, love them, leave them. Some are poets. Some don’t give a damn. Some are alcoholics. Some die happy. Some hurt so badly—are so filled with regret—want so much for another life. All are passionate. All explode with a desire to tell us who they are, where they’ve been, and how they got there. What results is an impassioned medley of female experience.

Nicky Guadagni is responsible for much of the moving atmosphere. She demonstrates her breadth and nuance as an actress, moving across the 7 roles with a seamless grace. While it took some time for me personally to ‘get in’ to the monologues—their lyrical style, along with a heavy north English accent right off the top, distanced my anti-realism theatrical sensibilities—Guadagni had me hooked by the third monologue, in stiches by the forth, and in tears by the end. Her range as an actress, along side this incredible range of female experience, leaves something here for everyone—not simply a story of fascinating, little-known women, but a kernel, of, dare I say, identification for the audience. A feeling of—oh, yes, I’ve been there before. Hooked was constantly touching on something human, something relatable. Something that speaks to me, today. This is the power of representation, and Hooked wields it with great strength. All of this was only further enhanced by the Layne Coleman’s direction, which animated the intimate space to great affected—using stairs, balconies, basically anywhere they could light. Rebecca Richerack’s lighting and Victoria Carr’s original music both greatly enhanced the scenes, bringing these ghosts to life in startlingly beautiful ways.

Peggy Phalen writes about the ephemerality of performance suggesting that “theatrical performances create a kind of mausoleum, a space designed to summon the phantasmatical charge of the immaterial.” In other words: theatre has the power to summon ghosts into being. Such a summoning is at work in Hooked. And as these women live, breathe and die on stage before our eyes, we are left with an image of ‘woman’ that is hardly easy to define. As Trinh T. Minh-Ha states, “women can never be defined.” Hooked revels in this impossibility as celebration, performing women as mothers, daughters, artists, writers, sisters, drunks, martyrs, lovers, and then some. As such, Hooked demonstrates what power theatre and performance can wield in bringing ghosts, and women, to the stage.