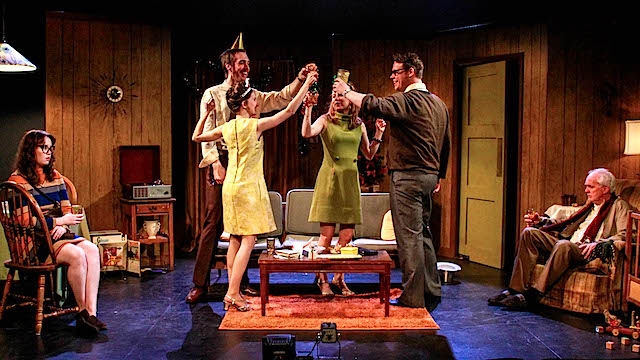 Live From the Surface of the Moon

Max Baker’s new play Live From the Surface of the Moon at The Wild Project is a frustrating and uncomfortable glimpse at Midwestern suburbia in 1969, juxtaposing vast technological advancements with the backwards sexual and social norms of the time. While Baker’s premise is an intriguing one, his play suffers from a lack of focus and the result is an uneven narrative.

Live From the Surface of the Moon takes place in the home of a young, blue-collar couple in Cleveland, Ohio. The play opens on the afternoon of the moon landing with Joe, a truck driver by profession, yelling at his very pregnant wife about a stain in his pants that she needs to remove. As a housewife, Carol appears to be anything but satisfied with her life as Don pretends that he is the king of his micro-suburban kingdom. She yells, smokes, and drinks gin (despite her doctor’s suggestion that smoking might be bad while pregnant). Carol’s father, who suffers from Alzheimer’s disease, lives with the family too, much to Don’s amusement. To celebrate the moon landing, Carol and Don’s friends June and Wendell are comes over for a dinner party, and Carol’s proposed babysitter, Holly, joins as well. As the dinner party commences, June dominates the conversation when she is present – championing the women’s liberation movement in a very superficial way. Her husband Wendell seems the most easy-going of the bunch, laughing off Don’s anger and his wife’s passionate outbursts, and encouraging the quiet and awkward Holly to read her poetry to the entire group. However, for everyone else’s character flaws, it soon becomes apparent that hyper-sexualized Wendell is the most sadistic of the group – humiliating Holly in a harrowing way.

The driving force in Live from the Surface of the Moon is the characterization. June expounds feminist dogma while at the same time talking up her new turquoise kitchen (because turquoise is the new hot color), and she cites Kate Millet’s work but subsequently admits that she has not read it. Her support of the women’s movement feels trite and little more than a social butterfly’s attempt to fit in an ever-changing culture. Wendell similarly spouts clichés and uses modern vernacular in a humorously out-of-touch way. The façade of Wendell and June is countered by the honest but strained interactions between Don and Carol. Don is a jerk – pure and simple. He yells at his pregnant wife to “hold it in” when she starts having labor pains, simply so he can watch the moon landing, and he hates taking orders from his wife to check on dinner as if such an action is beneath his status as a man. Carol snaps back and does not hide her anger with her home life and the demands of motherhood. Holly and Joe, Carol’s father, add yet another wrinkle to this diverse set of characters. Joe represents an era past – when love-at-first sight was an idealized norm and child-rearing involved corporal punishment. Holly should be the most reflective of the modern age, but she is an introverted woman who engages in secretarial work and wants to marry – hardly cutting edge.

These characters provide a sounding board to talk about social and political evolution, but many scenes suffer from pacing issues and problematic story-telling devices. For example, during the second act, the couples engage in an overly long game of historical trivia that quickly becomes tiresome. Also, after being abused by Wendell, Holly gets drunk while babysitting for Carol and Don. She then wets herself on their couch. Not only is it a strange character moment (Holly is presumably college-age), it is an action that is not, for example, directly linked to Wendell’s actions or appearance. Additionally, Joe’s random shouting (a result of his Alzheimer’s) often halts forward progress in the plot without offering much in the way of substance. In fact, I frequently found myself wondering why the character of Joe was included in the play at all – he seems to exist purely to disrupt the narrative.

However, none of these points are quite as concerning as the largest issue with the play, which is, quite simply, that none of the audience members (myself included) could figure out when the play ended. Many of us thought the intermission was the end, and none of us were able to discern whether the final scene was the end of the show or simply an extra-long blackout. This confusion reflects Baker’s inability to offer a fulsome and discernible story.

Despite the plot downfalls, the ensemble of this production does an admirable job with the material. Ian Patrick Poake, to his credit, portrays the chauvinistic Don with conviction, and Breanna Foister’s is quite convincing as the opinionated and sickeningly fake June. Kate Garfield’s flawed Carol is both sympathetic and commanding (when she wants to be), and Brian Edelman does a nice job of creating Wendell’s “everyday man” façade while also selling the unmistakably creepy side of Wendell. Unfortunately, I was less compelled by Lisa Anderson’s portrayal of Holly – the character is meant to be stiff and awkward, but Anderson’s performance felt choreographed at times (as if she was trying too hard to convey Holly’s discomfort).

Scenic designer Doss Freel and props designer Zachary Sitrin did an excellent job capturing the time period and the suburban Ohio setting. Having grown up in an Ohio home built during the time period in question, the wood paneling reminded me of the homes of many of my childhood friends (mine too, which still had wood paneling when we moved in). As soon as I sat down, I noted the obligatory “lapsed-Catholic” crucifix adorning the living room wall – a decorative touch that I appreciated – and the period games and can-opener were entertaining novelties.

Live From the Surface of the Moon is an interesting exploration of the socio and political turmoil of the late 1960s, the social progression of women in society since that time, and the facades that some people maintain to fit in a world that is changing around them. Unfortunately, the play does not come across as a cohesive piece of art with a complete story line, and this distracts significantly from its strengths as a production.