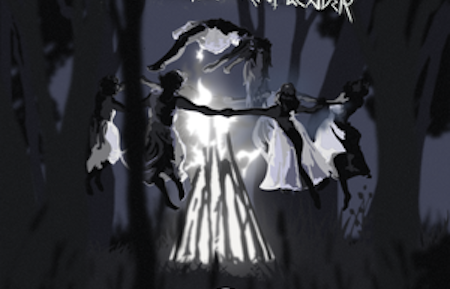 “I’m so glad you’ve taken an interest in our farm,” director Becky Johnson exclaims in character at the top of Cult Wayward, the all-female improv show at the Bag Dog Theatre. This new addition in the Wayward series did not disappoint: with razor sharp wit, dynamic energy and an impressive collaborative energy, this all-female troop is not to be missed.

Cult Wayward is the third in the Wayward series. The Wayward series is all-female improv that explore the day-to-day lives of set characters in a set location. The first was Wayward, a school for girls, and the second Camp Wayward, an all-girls summer camp. This time, we find ourselves at Cult Wayward to meet, through a fashion show opening, our cast of characters: Jannifer Dump (Ann Pornel), the washed-out actress looking for her next big break; Tough Rod (Jess Bryson), the 17-year-old tomboy who just wants to play ball; Casey Silverton (Christy Bruce), who walked out on her family many years ago, and has no regrets; Randi Booth-Savage (Evany Rosen), the recent divorcee who honestly thought this cult was a ladies retreat; Sister Meredith (Monica Heisey), who whose on her 8th cult, and is hoping this one will be the charm; Monicai (Meghan Swaby) our young, feminist cultist; Glorm (Kayla Lorette), the supposed head of the cult, and the only one in direct contact with the Supreme Leader; and Carol Dignity (Carolyn Taylor), rival to Glorm, and a true cultist, if ever there was one.

Formally as an improv show, Cult Wayward is quite simple. Director Becky Johnson as Narrator (and sometime Supreme Leader) leads all the improvisers through different scenarios—putting our set characters together in suggestive scenes to great effect. It involves the same deep listening as any good improv show, with an added bit of smarts—what an intelligent group of ladies! What results is a smart, tight show that never takes itself too seriously. And we were certainly picking up what they were putting down; there was seldom a moment where someone, somewhere in the audience wasn’t laughing their heads off. And the reason was clear: strong performances by all. Highlights included the hilarious improvised song from Randi Booth-Savage (Evany Rosen) who has us in tears from the first note. Glorm (Kayla Lorette) was another highlight. A natural performer with a captivating presence, Lorette will make you laugh by just standing there. She easily steals the scene with her physicality, facial expression and on-point comedic timing.

While there were comedic highlights, the strength of the show is in the ensemble. There is a real sense of camaraderie in each scene—this is a performance that highlights the power of collective. The best scenes were the ones that everyone was in. And even when they were not in them, watching them laugh off stage was always fun. The playfulness between the members was most evident with the not-so-subtle improvised challenges the players would throw at each other. This is colloquially known in the improv world as ‘pimping.’ For instance, let’s say one player comes in playing a doctor, another improviser might say something like, “wow, I’ve never met a doctor who speaks only in rhyme”. Our doctor has now been pimped out as a rhyming doctor. While this is most often—in my experience of improv-going—a move that makes you look good at the expense of your partner, in Cult Wayward, it was different. Here, pimping was employed only to increase the fun, or to raise the stakes. It was meant as a playful challenge and was always accepted as such. Further, it was always integrated into the story, not discarded as a meaningless gimmick or gag. Actually, while I usually dislike pimping, writing it off as contrived, one such moment resulted in my favourite joke in the show. When Randi, Tough Rod and Sister Meredith get a letter thrown on stage (a phrase from the audience collected at the beginning of the show. Or, I should I say, a message from the Supreme Leader), it lead Tough Rod and Randi to reenact Jurassic Park in two minutes. While explicitly pimped into doing this by Sister Meredith, it resulted in an outrageously funny and surprisingly accurate summary of Jurassic Park. And the joke didn’t stop there. When we next met Randi she exclaims that she’s been reenacting movies from the 90s with Tough Rod for 3 days.

What’s the plural noun for a female improviser? A School, A Camp, Or a Cult? Certainly, with Cult Wayward we are given a bitingly funny, very clever bit of improv. Not only does it live in the same world as the previous Waywards, with some of the same characters, it is a self-aware bit of comedy. It knows it’s putting on a show, and really it just wants to have some fun in the process. These hilarious ladies embody a Kimmie-Schmidt energy: goofy, at times dark, but all fun. These female are as strong as hell, that much is clear. Perhaps the plural noun for a female improviser, like with crows, is something less tangible. Many words jump to mind: must-see, hilarious, sharp, and, of course, wayward. As the definition in the epigraph suggests, it’s impossible to predict what you’ll get with Cult Wayward. But with a group like this, it’s bound to be smart, goofy, and have you laughing all the way through.

Cult Wayward is playing every Thursday of this month! Go see it, dammit!