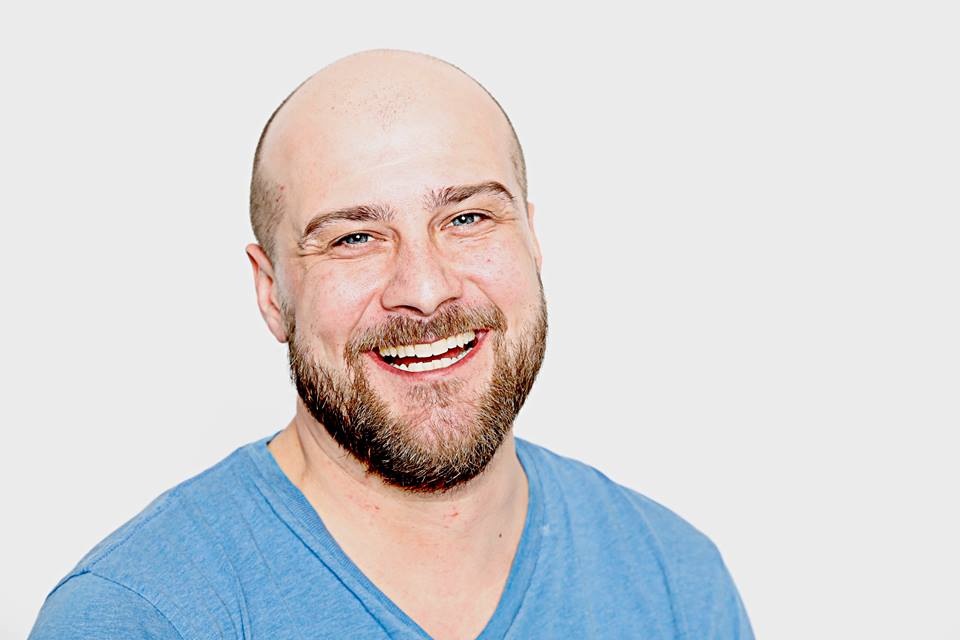 Tim Walker is one of those actors who can make even the grumpiest critic smile (well, we’d have to ask certain national newspaper writers to really verify that statement, but he certainly can lighten any of our moods). This affable, empathetic, endlessly endearing Tim Walker quality was put to the test during the 2014 Fringe Festival when playwright Kat Sandler had him kidnap the also totally endearing Colin Munch and chain him to a desk. But he did it to try to make the love of his life (Caitlin Driscoll) laugh so he’s still alright in our books. It was that beautifully exposed, misguidedly optimistic, subtly sorrowful but still truly amusing performance that earned Tim his Best Actor nomination for the runaway hit Punch Up.

Do you remember your first formative experience with theatre?
My first formative experience was at 13 years old. I was in a farce called A Flea In Her Ear. It was produced by this guy in Peterborough who got run out of town because he promised everyone money and then didn’t pay up and it was this whole big scandal thing. I had no idea about any of that at the time. All i remember is my grandparents came to see it and they dropped off some food for me mid-day when we were loading in and my grampa saw they were using oil paint on the set like a couple hours before the show and he said something to the effect of “won’t be dry in time”. We put this rickety set together, wet paint and all. No tech, no dress. Jus the show – oh boy- There’s an early scene in the Bordello where the bed revolves and the whole thing collapsed. Of course the farce is written around this bed revolving and it wouldn’t budge so we were improvising early on and badly trying to make sense of the non-sense. It was a fantastic mess. I loved it.

Who are some of the artists who’ve always inspired you?
Well, Neko Case has been a personal favourite since her first album The Virginian. She is a tempest and a poet. I love her. I’m floored by all storytelling- good and bad. I get bored easily so it’s hard to say who has “always” inspired. I mean Cross, Odenkirk, Whedon, Harvey Pekar, Al Purdy, Brian K. Vaughn, Tom Scharpling and Jon Wurster, Tina Fey-

How did you get involved with Theatre Brouhaha?
My relationship with Theatre Brouhaha came out of my friendship and time spent at theatre school with Danny Pagett. He essentially championed me to Kat. I knew Kat a little. She had done a production with an ex of mine so I had met her. Then she saw me in a bit role in RedOne Theatre’s In the Pines. So Kat had one of her infamous reads where we drink red wine, eat pasta, enjoy each others company and read the play. And I just loved the attack of her writing. It’s rhythmic and sexy and funny and fast and all of the things I want to roll around in.

After Kat Sandler worked with you on Help Yourself, do you know if she wrote the role of Duncan in Punch Up with you in mind?
I was desperately hoping she would offer this part to me. I knew about this play. We read some bits and pieces. But, you see, there are a couple of Duncan’s bits that are literally my stupid bits. Like the interrupting cow joke. So when she started calling me and asking me if she could use some of my dumb ideas, I kinda knew I had a good shot at the part.

It takes a particular brand of charm to play a kidnapper without losing the audience’s pathos. What was the secret to keeping Duncan in the “good guy” column? Or at least keeping us from wanting to call the police.
Well I’m glad I was able to strike that balance with you. I’m sure some people saw him as creepy. I sure hope not. My intention was always to keep him innocent despite the pre-meditative creepiness of it all. I think it comes down to Duncan’s unbridled enthusiasm and belief that his plan will work because he “ lives in a Disney movie” as Pat so aptly puts it. And in Disney movies your intention always trumps your actions. So I banked on playing his intention with heartfelt honesty. I’m glad it worked. I mean Kat made some pretty sound directorial decisions with the vibe of the set and costuming . Those things go a long way for the audience. I mean it’s easier to laugh at whats happening in a Pee-Wee Herman dungeon than a True Detective dungeon.

With Kat directing her own work, she often talks about how fluid the script is throughout the rehearsal process. How did the character change from final draft to opening night? What were some of the biggest elements you brought to the role in the room?
In the room we all put on our big people pants and decided how fart jokes work.

Literally. You might think a fart is a fart is a fart. And in every day settings, it’s true- it’s either mildly amusing or mildly uncomfortable. But when you’re using a physical prop as a punchline (especially a repetitive one) you have to figure out the rhythm of the bit. This really takes all hands on deck. I remember one day we were working the whoopee cushion bit and we all just kinda got stuck in this section of the routine and we were trying to work through it and we just had this moment of “Oh my god, is ANY of this funny?”

Tell us about working with Colin Munch as “the funniest man alive” and Caitlin Driscoll as “the saddest woman in the world”.
Well it’s kind of crazy to try to use words to describe my endless respect and admiration for both of these bonus creatures. I know saying things are “like jazz” is so 1988 but there is something special about being in a room with those two. Stuff comes up, bubbles and calcifies. I don’t know how that happens. I guess it’s just chemistry with people.

Colin and I met in theatre school ten years ago. We have been in the same scene for a long time. But somehow our friendship is still vibrant. You meet a lot of people in an industry based on people. And you can’t just CAN’T have that warm feeling of real friendship with everyone. But we really do. We chill on my back porch and shoot the shit, talk about life. Get drunk and watch comedy or play video games. We really connect without having to work for it. I guess we love each other is the simple way to put it.

And the same could be said for Caitlin. I have a hard time writing this without getting emotional. Caitlin is the love of my life. We have been through the craziest ups and downs together. We met at a theatre camp when we were pre-teens. We grew up in the same theatre community, hung out at the same bars in Peterborough, went to he same theatre school (George Brown). I’ve shared more than half my life with her. Every day is fun and funnier than the last. Literally last night we laughed about something so hard we were incapacitated. And it wasn’t at some saucy remark Aziz Ansari made on his new Netflix special, it was us being goof balls.

Did you have a favourite moment in that production?
I do have a favourite moment. When Caitlin and Colin have the real heart to heart and he spills the beans about the blender- “ love is like a blender” and she looks like she’s crying but then she’s not…she’s laughing!?!?!?. I get to sit back stage and watch that every night. And EVERY show it brought me to tears. Both of them just wow me.

Also in 2014 you played a uniquely good-natured Macduff in Sterling Theatre Company’s Macbeth. How did that interpretation develop?
Well Macduff was a really fun role to put on. He is so separate from the world that every one else lives in this interpretation. He isn’t aligned with the Illuminati like everyone else. He is other.

I thought of Macduff as a family man that makes his living with this sword. Much like the professional hockey players of today. You go on youtube and hear what they are saying to each other out there… or the questionable things they do that result in injury. But that’s a matter of course for a warrior. He still puts his shoes on one foot at a time, like everyone else. I’ve learned you can be a perfect asshole on the field of battle and a perfect gentleman off of it. Macduff has moral fibre and the heart of a father but he’ll still saw your damn head off if it comes to it.

What are you doing now/ what’s your next project?
Playing a lead in Village Green, an indie TV series produced by Canal+, and a lead in The Bad Luck Bank Robbers this summer at 4th Line Theatre.