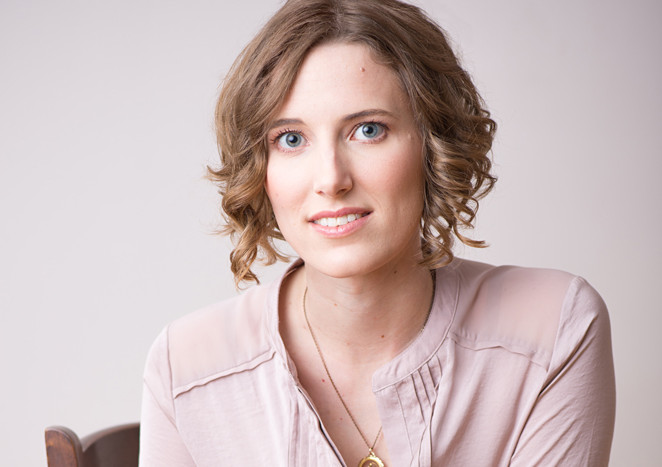 Once again, Dark Matter. We loved Circlesnake’s funny, weird, devastating parable so much that over the course of this series we’re interviewing every single member of its cast (in all fairness, there were only four of them) plus the director. Perhaps our intense love of Dark Matter will make more sense to you if we explain that Mikaela Dyke played an intelligent computer whose borderline humanity is tragically defined by her limited capacity for empathy. She was hilarious, but then she made our heart hurt- which is pretty much our definition of brilliance.

Do you remember your first formative experience with theatre?
When I was younger, I would watch BBC with my gran whenever I stayed overnight. They aired theatrical productions of Shakespeare, and I loved them. Plus, my parents and the neighbours loved to get me to read articles out loud from the newspaper as a party trick. Which might be weird? Is that weird? Well, I’ve told you now. And it’s true. I was a shy kid, but public speaking was a freeing experience for me.

Who are some of the artists who’ve always inspired you?
Generally? Dancers, acrobats, anyone who does a physical art. I’m always seconds away from falling apart at the joints, so I’m in awe of people who can evoke feelings with what, for me, is a loose stack of bones. In terms of specific inspiration? I had terrible taste as a kid – who knows, maybe I still do. But now, specifically, I love actors who do characters with attention to physical and vocal detail- Anna Deveare Smith, Tilda Swinton, Tatiana Maslany, Sarah Jones – ugh! There are so many amazing actors out there.

How did you get involved with Circlesnake?
Colin Munch and I met on the Fringe Festival circuit, and he introduced me to Alec Toller for Circlesnake’s earlier show at the Storefront, Special Constables. I got the part after someone else (really an amazing actor) turned it down. It was a fantastic experience, so when they asked me to do Dark Matter I didn’t hesitate to say yes.

Dark Matter was ensemble-created. How did that work? Where did the idea come from and how did it develop?
The development process for Dark Matter was phenomenal. Colin and Alec had the idea and got the five of us all together to talk about the book while they beat out the story. We each read it, watched the movie Apocalypse Now together, would bring in articles or photos or writing that we came across in researching the themes of the book. It was a heavy, intellectual and frequently passionate discussion. Then we wrote like we do for comedy. We spent some time doing improvisational exercises in character. It brought out some of the nicer, I think, more personal moments for each character in the play. Then we improvised the beats. Alec was on-hand to direct each of these and take notes on what he liked. We would discuss what we each found and then one of us would write the scene with notes from Alec. We had pretty fast turnarounds on the writing – then we’d read it together, give notes and rewrite. It was really fantastic. You got to see how other people wrote for your character and it could often give you a great new perspective on what was going on. It was the same process we used doing Special Constables (which was a fast-paced comedy) and it was wild to see how well it worked for such heavy subject matter.

How familiar were you with Heart of Darkness before Dark Matter?
I loved Heart of Darkness when I read it for school years ago. I love nihilist stories, I can’t help myself – Poe, Lovecraft – anything dystopian, too. I’m obsessed with Margaret Atwood’s MaddAddam trilogy at the moment.

How did the sci-fi elements inform and fit into Conrad’s original story?
Heart of Darkness is a really terrifying story. If you think of the elements of a sci-fi movie, they’re mostly psychological thrillers where the monster of the story is a metaphor for the abstract concept our heroes are actually battling. Our Kurtz similarly represented a fear of what horrible things people may do in the name of civilization. But space was our unknown and, as we wrote, we discovered its constant, soundless presence left us with a feeling of crushing isolation. Which is a prevalent theme in discussions of modern technology, but it’s a feeling we discovered in the book, too. We’re told about the time Marlow tells this story by an unnamed narrator. You start two steps removed in the novel. Conrad’s fear of the crushing heat and impenetrable jungle unknown became our fear of the absolute cold and isolating emptiness of space as an unknown.

You played an artificially intelligent computer. How did you approach developing the voice and physicality for the role?
Through improvisations in character, mostly. Then through writing and having my character written for me. I love doing voices, and Cal was fun because she’s supposed to be good at imitating things. I’ll try a bunch of different voices for a role and just hope that the director will tell me if I sound really terrible. (I trust that Alec will tell me when I’m being horrible. Sometimes he just does it for fun.) Then the physicality was kept fairly simple because she’s a hologram. I ‘appear’ and ‘disappear’ using the lights on my suit, so being able to control them without being too obvious was important.

How did you go about finding that perfect line between just-human-enough and not-quite-human?
Cal was a really tricky balance. She changed really early in the process, because we were trying to nail that sweet spot between her being essentially a robot and still being capable of having emotions. We rewrote some while trying to figure out what was the right tone for her. Alec was a fantastic director, too – the improvised Q&As we did in character really shook the wrinkles out of the work with her. I was also fortunate to have excellent scene partners who really gave their all on stage and stayed so connected throughout. It`s easier to find that subtlety when the people with you out there help take you on that emotional ride.

Heart of Darkness is incredibly dark but Dark Matter was surprisingly funny. How did you strike that balance?
Colin, Kat and I are all comedians and Josh is hilarious in his own right. We’re all pitch black comedy fans. It almost makes it easier to come up with jokes when you’re spending an alarming amount of time contemplating the isolation of modern life and how it relates to the suffocating emptiness of space.

What would you say is the most important conversation you had with director Alec Toller throughout the rehearsal process?
Nothing Alec Toller has ever said could ever be called important. I actually couldn’t even tell you what *might* be called important because, honestly, this process all felt important to me. It was an amazing time, I felt honoured to be able to discuss and argue and work with everyone – including Alec. It was also such a short development period – five weeks? I don’t even know – it’s as though the show just appeared as we rehearsed. We found what we needed as we needed it. Alec has a really great eye for what needs to happen and is great at not only finding it, but pointing us in a direction where we find it together. We didn’t have the ending until we’d rehearsed every other scene – we weren’t sure exactly what would happen until it did. Alec and I did have an excellent conversation about what Cal needed to be – naive but not childish, sweet but not coddling, smart but not robotic, fun but not zany, emotional but not too much. It was a discovery process more than anything.

You’re nominated along with the rest of your cast for Best Ensemble. Tell us about working with the other actors.
I would do it again in a hummingbird’s heartbeat. Such open, loving, strong performers who really stepped up every rehearsal, every show, every moment of research and discussion to give everything they had. Seriously, I felt challenged on every level. The improv was some of the most difficult work I’ve ever done. Endowing characters, filling out a sci-fi universe and connecting emotionally on the fly? You want generous supportive people who make you work for it. Kat’s an intellectual and emotional powerhouse – she can go from hilarious to vulnerable lightning fast. Josh is the most intense human being on stage, but is so tender and careful to work with. Like, he really takes care in his work. And Colin’s so great at pushing for honesty – he’ll call you out immediately if you’re making a soft choice in a scene. Plus – I don’t know if you’ve heard – but he has impeccable comic timing [Editor’s Note: she’s making fun of us].

Do you have a favourite moment in the production?
This is such a hard question. I think there were a couple of beautiful visual moments Alec worked into the show. The space jump scene, the writing on the canyon walls. But I loved watching Kat and Josh play that bar scene. Or, oh! Colin and Kat connecting for like a full minute before they start fighting again? So good. WAIT, *spoilers* Josh just gouging Colin’s eyes while staring Kat down. Ugh! You could hear a pin drop every time!

What have been some of your favourite roles you’ve ever played?
A huge part of my heart is dedicated to the people I play in my solo show, Dying Hard. It’s based on interviews with real people and they are strong, complex people whose stories I’m honoured to share on stage. More traditional roles would probably be Blanche in Sky by Connie Gault, and every role I did for Tony Ho’s Peak Falls (who could pick between a sister obsessed with incest, half a conjoined goth teen twin and an evil demon changeling mother).

Do you have any dream parts?
So many. I’d love to be in everything Sam Shephard has ever written. Anything Kat Sandler will ever write.

What are you doing now/ what’s your next project?
Good Morning, Tonight! is a webseries about a morning show set in 2066, which I co-wrote and developed with Kyle Stevenson, and we’re getting ready to film. I’m also recording another project that Lovecraft fans will love in the near future. I’m producing and dramaturging someone else’s solo show on the Fringe Festival circuit and there are a couple of theatre shows looking like they’re coming through for summer/fall. If you want to see me live, I’ve been performing comedy on a semi-regular basis wherever I am. Twitter’s the best place to find out about my upcoming shows.

Do you have anything you’d like to add?
Yes. Thank you.