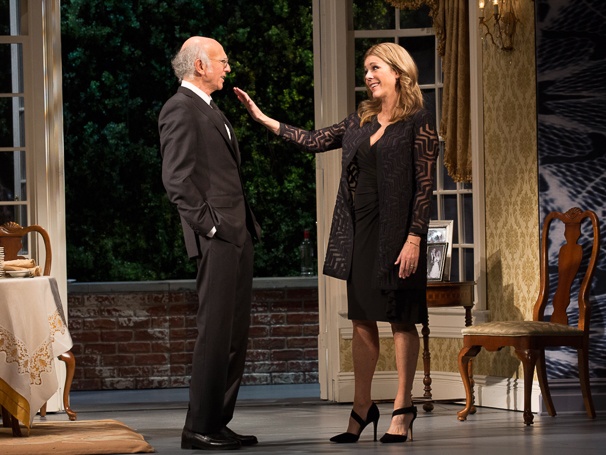 Larry David’s Fish in the Dark

We need to talk about a disturbing trend on Broadway that must be stopped. This trend impacts the public at large and, if not curbed soon, could have unsavory consequences for us all. The terrible scourge plaguing mankind? Mediocre (and even bad) plays selling out large Broadway theatres at astronomically high prices strictly because a famous actor/writer is associated with a project. Larry David’s new Broadway venture, Fish in the Dark, at the Cort Theatre constitutes the third such travesty that I have endured this season (the other’s were the indulgent It’s Only A Play, starring Matthew Broderick and Nathan Lane, and The River with Hugh Jackman, which was incredibly boring). David’s show is one of the hottest tickets this season, with theatregoers paying high premiums to get a ticket – simply because David wrote and stars in the play.

Never mind that David has never written a Broadway play, nor has he ever performed on a Broadway stage.

Never mind that the famed comedian has repeatedly suggested in interviews that he was unenthused by the idea of working on Broadway (I know, I know – being a curmudgeon is his shtick).

Never mind that the world has already had 15 years of David’s signature comedy style in the form of Seinfeld and Curb Your Enthusiasm.

Fish in the Dark is a comedy about a dysfunctional family, with David and Ben Shenkman starring as two brothers who, upon their father’s death, squabble over which man will have the unfortunate task of taking care of their mother. David’s character, Norman, loses the battle and when his mom moves in, his wife (played by Rita Wilson) moves out. Norman is soon made privy to the family secret that his father got a little too friendly with his former maid (Rosie Perez) and their union resulted in a son who needs cash for college. If it is about anything, Fish in the Dark is about family – a very annoying family with a penchant for behaving inappropriately.*

Is it funny? Hardly.

Admittedly, I have never been a fan of David’s comedic style, finding it mundane, so it is unsurprising that his play barely elicited a handful of chuckles from me. However, numerous friends who are David fans described Fish in the Dark as a compilation of several poor episodes of Curb Your Enthusiasm. David does not try to hide the fact that he is simply reusing old material – the largest laugh of the night came when David busted out his “pretty good” Curb catchphrase (which, for the record, wasn’t all that funny for those of us unfamiliar with its origins). Many of the conversations feel like unnecessary diatribes, veering away from the plot in search of a laugh.

If you are curious as to whether David is a better Broadway actor than a Broadway writer, he is not. In fact, he is much worse. David is a screen actor who clearly has no idea what he is doing onstage. His physical acting comes in two principle forms (flailing about with wild abandon or huddling in on himself with crossed arms), but he also has the great privilege of being the only actor who I have seen on a Broadway stage that mumbles, making him outright incoherent at times. The mumbling is inexcusable, and I have to wonder why the seasoned director, Anna D. Shapiro, did not adequately address this problem. The rest of the ensemble does a respectable job with the limited material, with Jayne Houdyshell leading the way as the long-suffering and feisty mother Gloria Drexel and Rita Wilson as Norman’s long-suffering and feisty wife.

Technically, Todd Rosenthal’s scenic design is understated and appropriate, but it is really the scenic projections between scenes that steal the show. A animated fish in a light bulb (seen on the play’s marketing materials) takes center stage and occasionally blinks, which is surprisingly enjoyable. Additionally, between scenes, an animated death certificate adds to the plot while allowing the stage to be reset. It is a welcome device.

If you adore Larry David, you may appreciate elements of Fish in the Dark or, at the very least, will enjoy the inside jokes. However, if you are excluded from that group, save your money for one of the many other Broadway options this season – you can thank me later and will not inadvertently contribute to the production of more weak plays on Broadway. There is enough talent out there to focus production efforts on worthy material, and, really, Larry David is doing okay without this handout.

* Superficial, argumentative, and sometimes creepy (e.g., unsolicited groping by multiple characters and uncomfortable prostitution of a teen), the fictional Drexel family is not the sort of family that you want to spend a whole evening with (god forbid, a lifetime).