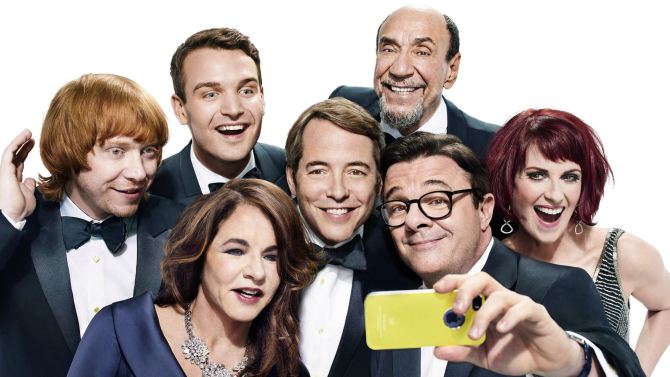 It’s Only a Play: Too Bad It’s Not A Good One

Terrence McNally’s new theatrical endeavor It’s Only A Play has all of the components for a major Broadway hit: a well-known playwright, the re-uniting of bromantic colleagues Nathan Lane and Matthew Broderick, a handful of well-known and respected actors to round out the ensemble, and the buzz of being the hottest ticket in town at the moment. Too bad the show is terrible. No. Seriously. This is the play that ego built, and, but for a few witty one-liners and brief moments of superb acting (coupled with a marvelously decadent set and costumes), this is the play that ego destroyed.

It’s Only a Play is a play about a critically panned play. How prophetic! The show follows the exploits of a dimwitted but encouraging producer, a poor playwright, a brilliant young director, a fading actress, a smartass critic, a self-important actor, and a starry-eyed young man who was hired to handle coat check for the evening – all of who are present at the opening night party for a new play on Broadway. When horrific reviews start pouring in, the members of the group quickly descend into despair and find that their celebratory party has turned into a possible closing night.

There you have it. Oh sure, other things happen. Like name-dropping. Lots and lots of name-dropping. I felt like I was reading a tabloid gossip column. From Lady Gaga’s wardrobe to Shia LeBeouf’s recent arrests, the celebrity references in this play are dizzying and pompous. Nathan Lane even makes a joke about Nathan Lane. Why, you ask, is name-dropping so prevalent in the play? Great question! I am not sure but apparently to appeal to the crowd of people who thought that they bought tickets to a Comedy Central roast. Aside from the name-dropping, there are also references to New York City theatre insiders, venues, and history – references that any average NYC theatre patron is unlikely to understand. Because, my dear Terrence McNally, while your preview audiences may be filled with elderly rich people who received free tickets from their producer friends (as you so kindly pointed out in your play) and who know enough about the theatre business to chuckle politely at the references,* the general public does not appreciate a Ben Brantley joke or a Shubert joke or even a commentary-laden Tony Awards joke. Perhaps Mr. McNally was hoping to appeal to a limited audience of insiders. Who needs a Broadway play that is accessible, anyway?**

Ultimately, the plot resonates as an ode to self. A self-indulgent piece of work, in which McNally has dumped every frustration and observation about the business of Broadway, championed the misunderstood playwright, and trashed every “outsider” critic. McNally could have accomplished the same result had he filmed an opening night party for one of his many previous plays. In fact, I am not convinced that he did not write this show on the back of a cocktail napkin at the opening night for Mothers & Sons (a bit of an overstatement as the play is technically a heavily re-written revival).

The one thing that could have saved this lamentable mess of a script (which sauntered along for nearly 3 hours!) was the acting. Given the headliners in this show, I expected incredible performances. The results were, sadly, lackluster. I have never had the pleasure of seeing Nathan Lane perform. A talented, charming, and hilarious actor, Mr. Lane delivered one of the best performances of the evening. He was the only actor who achieved a believable level of emotion onstage, and he delivered some of the best-timed punch lines in the production. In addition to Mr. Lane, Stockard Channing was well cast as the aging, drug-addicted actress Virginia Noyes, Micah Stock played the adorably naive and awkward Gus P. Head with admirable gusto, and F. Murray Abraham did his best with a remarkably lame, addled, and odd character.

Despite being surrounded by celebrated stage actors, the performance the surprised me the most was that of Rupert Grint. Admittedly, I gave up on the Harry Potter movies somewhere around the fourth installment, but I was under the mistaken impression that Rupert Grint had quietly disappeared after the films ended. Thank god I was wrong. Stumbling onto stage in a shiny suit reminiscent of something Paul McCartney would have worn as a member of the Beatles (and rocking tussled ginger locks of hair), it took me a full three minutes to recognize that the raving lunatic on stage was none other than the former Mr. Ron Weasley. Rupert Grint was good. He was VERY good and an incredibly solid actor.

Now for the bad news, which I am sure will draw ire from some readers. The greatest disappointment in this ensemble is Matthew Broderick.*** Several years ago, I saw Broderick in Nice Work If You Can Get It and presumed that his wooden and stilted performance (and his failure to connect emotionally with his fellow actors) was the result of his acting choices for that particular character. Now, I firmly believe that he has simply given up on acting. Broderick had no chemistry with Mr. Lane as his friend on stage, which is baffling given their strong relationship in real life, and he frequently appeared both lifeless and bored on stage. Perhaps it is time for Mr. Broderick to discover his passion for acting again. In addition to Broderick, Megan Mullally – a comedic genius and a smart performer – was remarkably one-dimensional and her accent was unidentifiable bordering on annoying in the role of producer Julia Budder.

The technical aspects of this show are probably the most interesting aspect of the piece. The entire play takes place in Julia Budder’s elegant apartment, which was beautifully designed by Scott Pask. Philip Rosenberg’s lighting design was both stunning and appropriate, in addition to being one of the re-occurring jokes of the play. I also loved Ann Roth’s costume design. It was clear that Roth had some fun designing numerous coats that “belonged” to recognizable celebrities (what would the entire cast of The Lion King show up in?) and the outfit that she has Rupert Grint wear is simply marvelous.

Ultimately, It’s Only A Play is probably a play best skipped, unless you are easily star-struck and looking to pay full price for a Broadway ticket.

*95% of the laughs that occurred around me were clearly forced. Also, at least 20% of those laughs may have actually been snores (there were a lot of people sleeping).