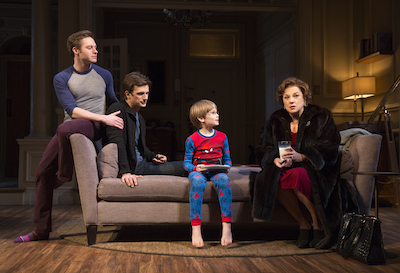 Four-time Tony Award winning playwright Terrence McNally is back on Broadway with his newest play Mothers and Sons, starring the reliable and respectable, Tyne Daly, at the Golden Theatre. “New” may be a bit of a misnomer, actually. Mothers and Sons is at least partially based upon McNally’s 1990 PBS film Andre’s Mother, for which McNally won an Emmy, which is, in turn, based upon a short play first performed off-Broadway in 1988. McNally’s play addresses numerous complex topics, from the evolution of the AIDS epidemic and the emotional toll the disease had on relationships, to the social stigma that continues to surround gay marriage and families, to the appropriation of a woman’s identity as a “mother.”  While the show has all of the elements of a gripping, modern socio-political tale, McNally fails to delve into any one theme or explore any topic with more than a superficial eye leaving this promising plot floundering to find purpose.

In Mothers and Sons, Texas matriarch and widow Katherine (portrayed by Tyne Daly) visits Cal Porter (Frederick Weller) in his Manhattan home for the first time in many years, but the reunion is not a particularly happy one. The reason for Katherine and Cal’s unease with one another is soon revealed – Cal was in love with Katherine’s son Andre until Andre’s death from AIDS twenty years earlier. It immediately becomes clear that Katherine was not entirely comfortable with her son’s sexuality or relationship with Cal. Her unease is exasperated when she learns that Cal is married to Will (Bobby Steggert), a young and energetic man, and that the couple has a son. Katherine is a sad woman whose entire identity has been defined by her husband, who she never quite loved, and her son, who she never quite identified with – leaving a vacant and aimless woman when both the men in her life are gone. That is not to say that Katherine is a pushover. She is brazen and opinionated but not necessarily forthcoming until prompted. Cal’s family is picturesque – a family that might have been Andre’s had his life not been cut tragically short, which does not go unnoticed by Katherine.

The entire play is a prolonged serious discussion between Katherine, Cal, and Will, and the onstage exchanges between these three adults bounce from hot topic to hot topic. The characters explode in bouts of unexplainable and irrational anger, which does not befit the tone of the show or the character development. However, the outbursts are effective at throwing new controversies into the exchange of ideas occurring on stage. Ultimately, McNally would have done better to sharpen his focus on a few themes and explore some of the topics in another work.

Some women embody confidence and poise. Tyne Daly is one such remarkable woman. Daly last appeared on Broadway in Terrence McNally’s Master Class. Ms. Daly is one of those stage actors that I never tire of. She is strong, she is eloquent, she is versatile, and she endowed this problematic script with some poignancy. I would love to see her on New York stages more often (please, and thank you). While Daly is in top form in this play, some of her colleagues on stage are less thrilling to watch. Frederick Weller gives a wooden performance as Cal, and his emotions come across as disingenuous. Unlike Weller, Bobby Steggert, most recently seen in Big Fish the Musical, is more animated and comfortable with his onstage persona. Steggert also has a better connection with young Grayson Taylor who is enjoyably precocious as Cal and Will’s son Bud.

This small cast has a visually appealing landscape to work with. John Lee Beatty’s set is a busy one, but it is remarkably well-designed and well-executed. Specifically, Cal and Will’s apartment looks lived in, and it looks like a nice Manhattan apartment where a child lives. Director Sheryl Kaller’s staging does not, unfortunately, make the best use of the space provided and the action is often relegated to two areas of the stage.

So, does McNally’s newest play raise questions worthy of discussion? Absolutely. Does McNally’s play feature themes meriting exploration in a theatrical medium? You bet! Unfortunately, in overloading Mothers and Sons with a plethora of thematic dialogues, McNally watered down all of the meaningful conversations that occur on stage and left this theatregoer feeling unfulfilled. However, an hour and a half with Tyne Daly in the Golden Theatre is not time altogether misspent.