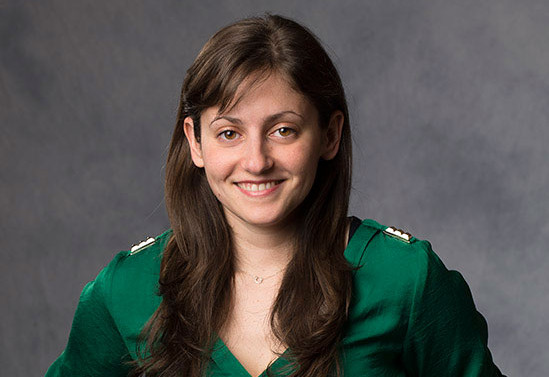 The best selling production of the year at the Shaw Festival was a delightful ensemble comedy starring a whole host of the company’s most established artists, When We Are Married. All of said wonderful actors performed admirably but were helpless in the face of tiny spitfire Jennifer Dzialoszynski who, in only her second season in Niagara-on-the-Lake, easily stole the show as unflappable maid Ruby Birtle.

Can you remember your first experience with theatre?
I think the first play I ever saw was a production of Beauty and the Beast, a favourite of mine as Belle has brown hair so I always felt like I could relate to her as a kid. But the first play I was ever in was an original student written piece in grade seven; I played Sol, a lonely woodcutter. I was over the moon to get to be in it as I was at an arts school, but not in the arts program.

Where did you develop as an actress?
I went to Unionville High School and was in the Arts York Drama program. I guess that’s where I really started. From there, I went to Ryerson University and got my BFA from the theatre school. But every show I do teaches me more about myself, and my work. I think development is ongoing.

How did you get started at the Shaw Festival?
I had done a couple of general auditions for Shaw, and then one day I got a phone call with an offer. It was probably the most exciting phone call I had ever received.

Tell us about your My Theatre Award-nominated role in When We Are Married.
I played Ruby Birtle, a 15 year old maid in the Helliwell household in Yorkshire. She is definitely a foil to her “respectable” employers – she has no filter, and delights in truth telling, even if it might be a bit painful for those around her. She is quick-witted, loud-mouthed, and altogether too much fun!

What was it like working with director Joseph Ziegler?
Joe is one of my favourite people to work with. He is funny, generous, and brings such love and care to the work while allowing us the freedom to play and try as many things as we can come up with. In all of our rehearsals I don’t think I did the same ending twice until we picked the one you saw; the photo-bomb. It was invigorating to have so much freedom and creative license.

Do you have a favourite moment from that production?
It was really a joy from start to finish. We all laughed a lot, the whole time. I don’t think I could pick just one moment.

What’s your favourite role you’ve ever played?
Utterly impossible for me to pick one. Playing Ruby was probably the most fun I’ve had, in rehearsal and on stage, but every part is so different, and they all hold special places in my heart.

Do you have any dream roles you think are perfectly suited to you or something completely against type you’d love to try as a big challenge one day?
Oh, lots! Some I’m too young for yet, but it’s good to look forward. Ones that I am appropriate for now I won’t jinx by naming in writing, but I’d love to do Ibsen, Chekov, MacIvor, Rebeck, O’Neil, Albee, Williams… it’s a long list.

Do you try and see every play in the season? What were some of your favourites of 2014?
I definitely see all the plays every season that I’m here – some I’ll see multiple times if I can manage it. All of the 2014 shows were so wonderful, but the thing I find especially exciting is seeing a play that I’ve never seen or read before, so that I can be genuinely surprised by things. In that regard it was a real treat to see The Mountaintop, Juno and the Paycock, A Lovely Sunday for Creve Coeur, The Charity That Began At Home, and Cabaret.

What roles are you doing this season at the Shaw?
This year I’ll be in both of the Shaws; You Never Can Tell and Pygmalion.

Any word yet on what the productions might be like?
No spoilers from me I’m afraid, but with stellar casts and crews I’m very excited about them.

Is there anything you’d like to add?
Thanks for coming! See you this summer!