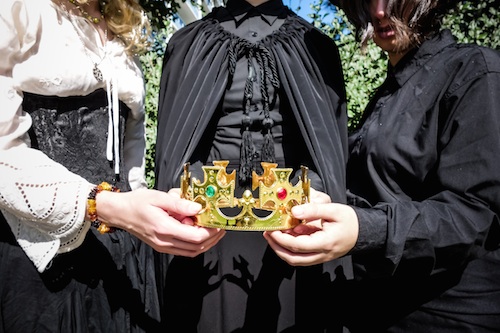 Theatre is a tough career. It’s long hours and hard work, low pay, challenging politics, tons of rejection and unwavering job insecurity. It’s hard to get noticed as a freelance artist and harder still to build an audience as an independent producer. Even if you’re brilliant, you’ll still likely spend your days as many of the most brilliant artists I’ve ever seen do- waiting tables, serving coffee, working a box office. Even those who hit the Stratford jackpot keep demanding, unpredictable schedules and can rarely guarantee an offer for next season.

Theatre is an amazing hobby. It strengthens your communication skills and your self confidence, fosters community, challenges you to think outside the box and express yourself while also teaching you to take direction and work as a team. It’s intellectual, it’s physical, it’s instinctual. It’s fun.

I think we enter dangerous territory when the line between the two preceding paragraphs gets crossed (not that the people in the first paragraph didn’t choose said tough career because of their experiences in the second paragraph, because they absolutely did).

Last weekend I was invited to review two companies I’d never reviewed before. The first was Daemon Theatre, a new musical theatre company propelled forward by an ambitious and charismatic leading producer (Carl Pucl, who is not credited in the program as Artistic Director but surely must be). Their Last Five Years was not particularly memorable (save a few key comic choices, mostly around Cathy’s blocking) nor did we particularly need another Last Five Years at this moment in time (never go right up against a film release, it sets your acceptable but unexceptional stars up for comparisons that will not go in their favour), but Daemon Theatre is a real independent theatre company. Likely modeling off the highly successful off-Broadway company Acting Up Stage (even the programs mimic Acting Up Stage’s format), Pucl clearly has an eye towards expansion and development, hiring established indie artists from his performers and his music director through to his surprisingly large production team. Daemon’s inaugural show needed vocal polish, stronger chemistry and a less cheesy design aesthetic but they’re professionals and therefore it’s fair to mention where they fell short of their artistic goals.

On the other end of the spectrum was Socratic Theatre Collective’s adaptation of Terry Pratchett’s Wyrd Sisters at the Red Sandcastle Theatre. As soon as the bumpy production began, I felt like I was back in university, practicing my review skills on unsuspecting philosophy majors who just wanted to put on Rent with their friends. The Socratic Theatre Collective should not be inviting reviewers; they’re not ready for that. Nor do I think they ever should be. The participants in Wyrd Sisters appeared to be having a ton of fun, putting on funny voices, referencing their favourite Monty Python bits, and generally celebrating their mutual love for the recently departed Terry Pratchett. That’s all well and good. In fact, that’s great. I’m sure the experience of putting on Wyrd Sisters was really fulfilling. But as a piece of artistic output, asking to be judged against the work of independent theatre creators who would balk at the implication that their work seems to be a “hobby”? Wyrd Sisters doesn’t come close to measuring up. But I feel bad saying that; I shouldn’t be saying that. Because I shouldn’t have been asked to review in the first place.

The Socratic Theatre Collective is a community theatre company; it’s for fun, not for life, no matter how loftily their mission statement expresses their goals. Daemon Theatre is an independent theatre company, aspiring to grow to a point of real financial sustainability and artistic importance. It’s because they’re a real independent theatre company that I can criticize their Last Five Years while censoring my far harsher thoughts about the far weaker show in last weekend’s review schedule. It’s important that we keep that line clear, otherwise we risk diminishing the hardship and achievement of theatre as a career and taking the fun and un-reviewable innocence out of theatre as a hobby.