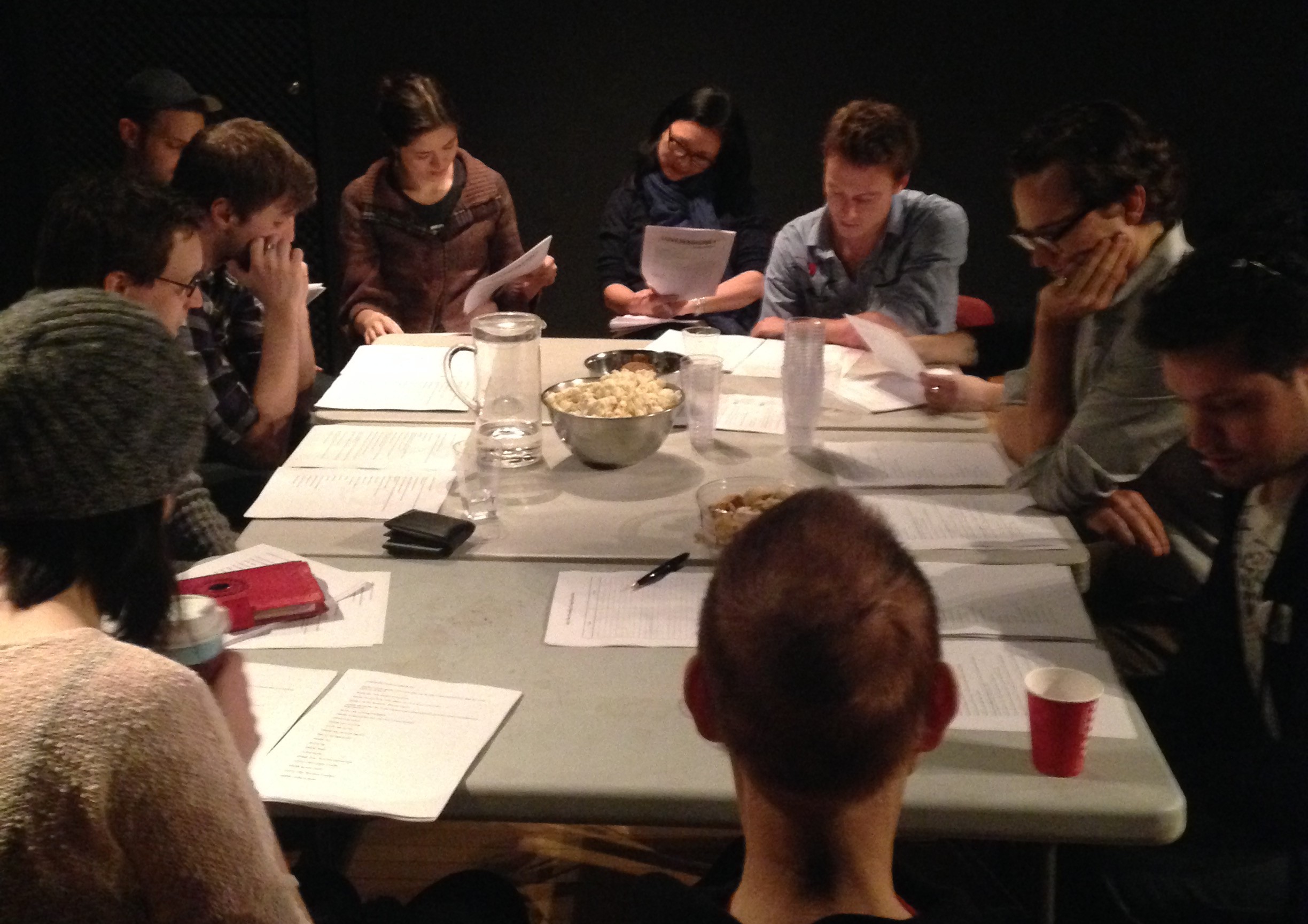 Inside the Howland Reading Group

Before The Howland Company was The Howland Company- long before they were a producing theatre company at all- they were a reading group. It all began back in late 2012 when a group of friends and theatre colleagues gathered in future Howland founding member James Graham’s living room to read Bachelorette by Leslye Headland. As the readings became a more regular thing (tackling classic texts they felt they ought to have read by now but that are a bit tough to read on your own), the group expanded and moved from their initial home on Howland Avenue (get it?) to local bars before settling this past September in their new venue at Fraser Studios (the West End theatre offers residencies with access to the space in exchange for help at the box office). Along the way, a core group of eleven artists emerged as the heart of the reading group, the same artists who would officially become the founding members of The Howland Theatre Company. They’d go on to produce one of the best-reviewed plays at last year’s Fringe Festival (which they’re about to remount at Fraser Studios starting March 5th) while the founding members spend their non-Howland time on the Soulpepper stage, playing Shakespeare in High Park, or headlining buzzy indie shows but the last Sunday of every month they’re back at Fraser doing the thing that brought them together- reading plays.

With NOW Magazine and the TAPA blog now promoting the readings, they’re beginning to attract a larger crowd beyond the core company members and one or two friends who attended early on. The largest group to date was, somewhat inexplicably, for the reading of The Little Foxes (20 people) but the numbers are steadily increasing with more and more new faces every week. When I infiltrated the reading in December, 14 people were in attendance, only four of whom- Graham, Ruth Goodwin, Cameron Laurie and Courtney Ch’ng Lancaster- are core company members (most of the others were at a conflicting event that night). Among the 14, there were four writers (myself, playwright Jenna Kennedy, songwriter Akiva Romer-Segal, and Burke Campbell, a playwright and theatre blogger) and the rest were actors (the handsome white twenty-something male contingent was particularly large, prompting some amusing competitive vibes when Toronto newcomer Jesse LaVercombe self-awarely brought up the prospect of encountering each other in audition waiting rooms). With many of the attendees using the reading as a networking opportunity, that awkward balance of camaraderie and rivalry carried over slightly into the reading as the group cycled through the five roles up for grabs in Kat Sandler’s 2011 comedy LOVESEXMONEY, giving in to a bit of fun one-upmanship but mostly revealing the power of casting as the same roles rotated around the table (with Graham serving as moderator, reading stage directions and casting new readers every 15 to 20 pages).

The reading began tentatively, everyone’s eyes focused closely on the words in front of them. As the comfort level rose, the performers began to play the words, addressing each other rather than just reading and ultimately infusing their performance with, well, performance. By the time Sandler’s first knockout speech rolled around, the acting level was such that the non-readers were in full-attention audience mode. The play doubled in pace when vibrant classical actor Josh Wiles took over from a quieter performer and opera singer Christina Song used her impressive vocal control to play a pitch-perfect near-human robot. Most of the regular Howlanders sat back a bit (media-savvy Goodwin tweeting the event rather than reading herself) though it was nice to hear Laurie show off awesome comic timing when I’d previously only really seen him play drama.

What made the Kat Sandler reading particularly interesting was how her being a local contemporary of the readers affected the discussion that followed (it’s hard to imagine the debate around last month’s James I having the sort of immediacy and scope that the Sandler conversation took on). Graham dutifully played devil’s advocate to facilitate debate as the group launched into topics as varied as the merit of LOVESEXMONEY as a remountable work, Sandler’s importance in the Toronto indie scene, the duty of the Canadian Art-Maker as a whole, and whether Shakespeare should be taught in classrooms (um, yes). Even I (who SWORE I wasn’t going to participate) couldn’t help but get in on the lively discussion, citing Sandler’s thematic growth in the years since LOVESEXMONEY and praising her signature style that does a lot to break up a season that saw no fewer than three proverbial “church basement Macbeths” in a single month (I love me a church basement Macbeth but sometimes you need a Retreat). The reading itself was fun but the discussion afterwards was the real selling point of an evening with the Howland Reading Group. My understanding is that most of them aren’t quite like that (really, who has that much to say about James I?) but if a Fringe Festival one-act about a sex robot can elicit that kind of brain activity, just think about the discussions that are still waiting to fill Fraser Studios on the last Sunday of the month.

Head over to 76 Stafford Street to join Howland tomorrow night (Sunday, March 1) for a reading of Toothpaste & Cigars by TJ Dawe & Michael Rinaldi (aka the play that became The F Word).