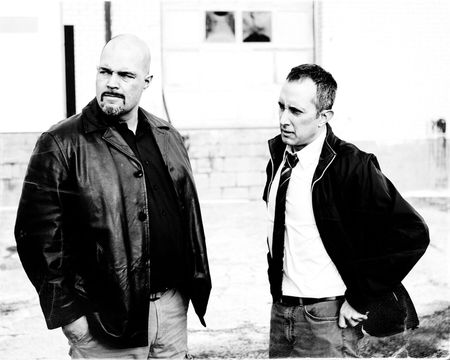 A Steady Rain (Paper Moon Productions)
This intimate cop drama presented by Paper Moon Productions in the tiny room on Queen East known as The Grocery tells an action-packed story but does so all in past tense. Anthony Parise and John Palmieri play a pair of childhood best friends turned partners, a complex odd-couple dynamic filled with deep-seated love and more newly formed resentment, but the monologue format of playwright Keith Huff’s Chicago-set one-act limits their interactions and thus the actors never really develop the sort of believable chemistry that would really anchor the story. Individually, however, they are captivating as they recount the same events through very different eyes. For Palmieri’s docile, careful Joey, the tragic story has a bittersweet but inarguably happy ending. For the alpha of the pair, the commanding and rash Denny, there’s nothing but loss at the end of their rain-soaked saga. The latter is Huff’s more enthralling creation and Parise plays him with beautiful grief to match his intimidating intensity. Director Elaine O’Neal’s strongest choices come out of her restraint. She blocks her actors with a keen visual eye never allowing the listening character too far from the story being told, crafting some of the play’s most memorable performance moments through reaction rather than recollection. It’s a strong directorial detail that elevates the script by engaging the characters in the present though their story and all its action is in the past. At times Parise and Palmieri seem miles apart, as though from different worlds rather than men of immeasurable shared experience, and that missing connection between them is too much the heart of the play to overlook its absence. But, examined in parts, A Steady Rain is full of remarkable achievement.

Small Axe (The Theatre Centre/Project Humanity)
I struggle with docu-theatre for many reasons but the principal one is that no matter how important the subject matter (and Small Axe’s subject matter is important), no matter how talented the story tellers (and Small Axe’s storytellers are top-notch), no matter how inventive the form (and Small Axe plays with format and structure in great ways), at some point the creators can’t help but put themselves into their story. This makes things reactionary, cautious and often (as in this case) apologetic. In Small Axe, Andrew Kushnir (a white, gay man of Ukrainian descent) attempts to tell a story; he only doesn’t succeed at telling it when he refuses to let himself finish. Inspired by a friend he once strove to but failed to fully understand, he enlists the help of five superb black actors (among them the incomparable and chameleonic Michael Blake and the graceful and strong Sarah Afful) to portray a wide range of people he interviewed on the topic of the treatment of gay people in Jamaica. This fascinating tale full of conflicting perspectives and accounts both traumatizing and uplifting is eye-opening and technically impressive as the performers move seamlessly between voices. Then Kushnir makes himself a part of the story. Or, rather, he makes himself the whole story. Throughout the first part of the play he serves as a host, providing context and a strong framing anecdote that’s as amusing as it is poignant and works brilliantly to segue the audience into the larger world of Small Axe. About halfway through, however, the fascinating voices of gay Jamaicans are cut off and replaced by Kushnir’s self-doubt and awkward guilt at the audacity of being a white man telling a black story. The play becomes about whether he has the right to tell the story, which is frankly less interesting than the story itself in every conceivable way. There are moments when Kushnir seems to be belittling his own empathy and some when he appears to be arguing that the play we’re watching shouldn’t really exist at all, or that it should exist but as created by someone else. In telling any story, especially one that is not your own, self-awareness is key. But it’s not everything. It should add truth and perspective and clarity but here all it does is interfere and direct the spotlight back to the person it, almost by definition, was not meant to be on.