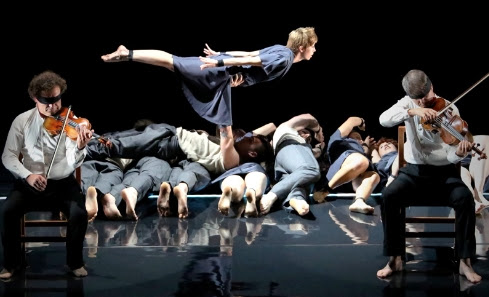 Australian acrobatic company Circa has livened CanStage with a refreshingly new and desperately needed contemporary circus show. Opus is 75 non-stop minutes of circus feats, but also shows the audience a new side of modern circus. It was a difficult transition, it seemed, for many patrons to adjust their pre-show anticipation into respectful awe and not the gasps and giggles expected at a big-top circus show. The artists were athletic and real, not creatures from one’s imagination, but elicited the same amount of wonder.

The contemporary circus market is growing, and it was a bold move that artistic director Yaron Lifschitz’s piece was included in the CanStage production list for the season. Fusing magically with the Debussy String Quartet, Opus shows a serious and artistic side of circus. It shows the athleticism and beauty of the human body and its capabilities. How it twists, turns, and tumbles in the air seems as a fleeting visual representation of the string quartet’s vibrant music. Bringing circus to the people in this new and modern way is so important for the art form, and CanStage has impressed.

Opus has some truly breathtaking moments of beauty. The ability of the acrobats is wonderful and exciting, flinging themselves as hard as they can head-first at the floor, only to twist and gently roll back to their feet. The artists are also able to seamlessly blend the emotional depth of the piece into their individual acts. Creating a unified whole from a series of solos, as is the traditional way in circus, is no small feat, and Opus demonstrates a united front of feeling and musicality. Their play with common movements is delightful, developing new pathways in and out of simple moves. The space itself is also expertly manipulated, bringing height into the mix, by stacking bodies, swinging one acrobat in breathtaking arches, and using the musicians to create boundaries to play in.

Some wonderful visual accomplishments are met in this show, integrating a relatively simple lighting score with the movement in the most blissful ways. However, there are moments of stagnation. At times, when the group moves together it is a writing mass of limbs you can’t tear your eyes from, but sometimes they just dropped the energetic ball. Part of the beauty of circus is the close examination of one human being and what they can accomplish; therefore it is difficult to plot many circus artists into a group number. However, if there had been a unified section, full of power and intensity, the energetic continuum of the whole piece would have flowed much better.

CanStage producing a piece like Opus is a wonderful development for Toronto’s arts community. Circus is an extremely accessible art form, and Opus demonstrated just how cohesive circus can be on the big stage with classical music.

Opus is a highly recommended show in the city right now, on at the Bluma Appel Theatre, playing until November 16th.