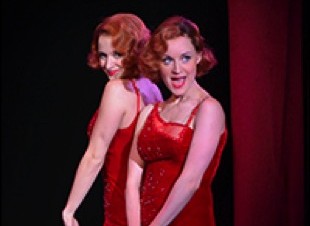 Side Show is coming to Broadway

Recently, I had occasion to see the pre-Broadway production of Bill Condon’s new revival of Side Show the Musical at the Kennedy Center in Washington, D.C. With the recent announcement that it will be officially transferring to the St. James this fall, I thought it might be a good time to share a few thoughts that I have about the show and this new production.

Let me start by saying I feel very close to the show, being obsessed with the original Ripley/Skinner production, fascinated by freak show lore, and having recently directed it here in Boston. I went into the new show having read plenty to know that I was probably going to hate it, given all the cuts, new characters, rearrangements, etc. With that in mind, I was pleasantly surprised by what I was met with.

The show is not-entirely-loosely based on the lives of real-life conjoined twins Daisy and Violet Hilton, who found a modicum of fame in the 1930’s touring as a vaudeville act and appearing in a few films, most notably Tod Browning’s Freaks. Their rise from the dark and seedy world of freak shows is a testament to the power and strength of the human spirit. The show is, above all, about humanity, which is why I think it resonates so strongly with audiences.

Unfortunately, the original production was a bit of a flop, but it survives on fringe and regional circuits because of its enduring melodies and strong leading characters. A fresh take on the show could be welcome on Broadway, but it would take some significant edits. And that’s just what Henry Krieger and Bill Russell, who are behind the book, lyrics, and music, intend to deliver. But the show still has some stumbling blocks to overcome before it will be greeted with open arms by an NYC audience.

Emily Padgett and Erin Davie step into Skinner and Ripley’s shoes as Daisy and Violet, respectively. It’s no doubt a tall order to try and take on these roles after the two women who literally became “overnight sensations” with their tour as the conjoined stars. I was pleased to find that Padgett and Davie were not attempting to be copycats of their predecessors (not that they could) and brought a softer, more technically sound approach to singing the score. Unfortunately, while they gain a subtle nuance in doing so, they lose the passion and heart that the score begs. Padgett fairs much better than Davie in closing that gap, and despite my affinity for a softer and more demure Violet, I cared little for her in the end. I hope a bit of focus is paid here before the fall opening.

Ryan Silverman and Matthew Hydzik appeared as the twins’ managers, Terry Connor and Buddy Foster. While full casting for the Broadway revival has yet to be announced, I hope that these two men make the transition. Silverman’s vocals were one of the finest I’ve heard all season, and thank goodness for a couple of new songs for his character. Hydzik does well with an incredibly high tenor role that asks him to dance his feet off at the same time.

One cast member that I wouldn’t be sad to see left behind is David St. Louis as Jake. Although he has received some praise for his portrayal of the cannibal king and the twins’ protector, I found his performance exceedingly one-dimensional, often times abrasively angry, and without depth. St. Louis has the unenviable task of following Norm Lewis who originated the role, and falls so short that he can’t even grasp at Lewis’ boot straps.

There are some refreshing new rewrites as well, most notably the addition of a whole new sequence which tells of the twins’ backstory and how they came to join the side show in the first place. This not only added to the twins’ arc, but Sir’s as well. Sir is most recognizable as the former Boss, for fans of the original, but feels like a fresh new character, with stronger writing and better songs. Other added characters include Harry Houdini (who has a bit of a throwaway song) and some new side show attractions (with incredible costuming and prosthetics, to boot!).

Of course, not all the additions are good for the story. In a move which feels cheap and flippant, it comes out that Buddy Foster is homosexual, hiding his true identity from the rest of the world. I don’t want to give too much away, but I have to say this is a huge misstep. It de-complicates the dramatic climax of the show and is one of the most uninteresting choices the new revival (or any show, for that matter) makes. Luckily, if you blink, you may miss it entirely, since there are just 4 lines in the entire show that allude to this new development. Even more luckily, so few lines means it will be easier to write out and find more interesting ways to write the ending.

Aside from that, Russell, Krieger, and Condon do a good job at trimming the fat on this monster of a musical. The new show-stopping numbers are clearly geared towards huge production values, which should please Broadway audiences. With a little more work on the book and some money spent on scenery, I think this could actually be a successful run of a beloved musical. Fans of the original will be pleased that most of the trademark songs are still part of the score (even if they appear under a different name), and that the rewrites are mostly true to the core of the story. I’d say it’s certainly worth the short trip down to NYC, so book your tickets to “Come Look at the Freaks.”