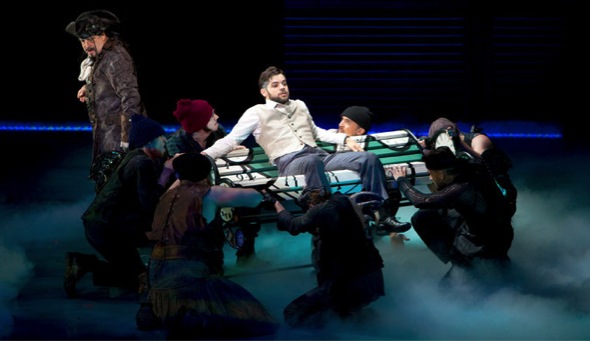 The American Repertory Theatre has introduced their next Boston-to-Broadway commercial hit, Finding Neverland.  Following the life and work of J. M. Barrie, playwright and author of Peter Pan, the musical is an emotional voyage of soaring highs and valley lows; bring the whole family, but also bring the tissues.  Despite the artistic success of the Miramax film of the same name (and mostly the same story), Diane Paulus’s latest directorial endeavor (combined with the efforts of successful Hollywood producer Harvey Weinstein) is a mixed bag of pixie dust magic for the stage.  The musical combines the magical talents of Jeremy Jordan, Laura Michelle Kelly, and Carolee Carmello with the lackluster score of Gary Barlow and Eliot Kennedy, leaving the production feeling like a Wicked rip-off rather than a work flying on its own merits.

Finding Neverland begins with writer J. M. Barrie (Jeremy Jordan) facing an ill-timed writer’s block, despite pressure from his frazzled producer Charles Frohman (Michael McGrath).  Barrie also suffers from a stifled marriage with the unfortunately-named Mary Barrie (Jeanna de Waal), who is humorously preoccupied with rearranging furniture.  In Kensington Gardens, Barrie finds escape and solace; the Llewelyn Davies boys and their mother, Sylvia (Laura Michelle Kelly), interrupt his solitude with boisterous games and laughter.  Barrie is charmed by their presence, and delighted to find his own suppressed “inner child” by, paradoxically, becoming a surrogate father-figure to the boys, especially to the young Peter Llewelyn Davies (Aidan Gemme).  However, Peter is skeptical of someone replacing his lost father, and Sylvia’s mother, Mrs. du Maurier (Carolee Carmello), also worries about Barrie’s influence over the children and Sylvia.  Despite these obstacles, Barrie begins to develop romantic feelings for the young mother, in a storyline which does not exist in the movie nor was likely to have taken place in J. M. Barrie’s life.

Meanwhile, Barrie is inspired by his imaginative adventures with the family to write a new play, Peter Pan, or The Boy Who Never Grew Up, much to the chagrin of the dramatic (and comical) acting troupe he works with.  Barrie insists that the production have the same magic that he imagines with the young family, and Frohman, Mary, and Mrs. du Maurier worry about Barrie’s sanity and wellbeing as the writing and rehearsals progress.  The play performs beautifully, and the rest, as they say, is history (as well as a popular film and presumably soon-to-be Broadway musical).  Act II contains more tragedy for the Llewelyn Davies family; it would be a disservice to disclose those events in this review.  Regardless, the production ends on a hopeful note with a joyful reprise by the leading characters and ensemble.

Jeremy Jordan leads the cast as the introspective and curious writer, offering a charming portrayal of Barrie with just enough youthful energy, as well as some needed restraint to capture the societal restraints of the time period.  This juxtaposition, especially in the rendition of “We Own the Night (The Dinner Party),” where Barrie fights the rigidity of his peers with the compelling pull of his “inner child,” makes for excellent theatre.  Jordan is at his best in his solos and when he leads the rest of the cast in song and dance, like in the extremely enjoyable “Believe,” a performative treat for the eyes and ears.  He also provides the money notes for “Neverland” and “What You Mean to Me,” making you question why you missed him in Newsies or Bonnie and Clyde (or Smash, for those of us who were smart enough to give up on it after Season 1).  He is the talented leading man who is constrained, like his character, by the conventions imposed upon him; here, the lackluster score and the derivative staging keep him from sailing to “the second star to the right and straight on till morning”—he is forced to sell a bad opening number, (“Prologue”) and “Circus of Your Mind” to establish the inner workings of J. M. Barrie’s unconventional mind.  In a way, his biggest “Captain Hook” is the material that fights him along the star-lit way to Neverland.

Laura Michelle Kelly fares little better as the widowed mother of four excitable young boys.  Kelly has a million-watt smile that any man would like to light up, and her dialogue with Jordan’s Barrie is lightning brilliant.  But the score counters their natural chemistry with music that sits in an uncomfortable break in Kelly’s voice.  Why did Barlow and Kennedy write music to soar in the soprano register, suitable for a whimsical damsel in distress or little girl? Kelly’s Sylvia is a grown woman: a mother of four with a lost love, the spark inside her makes her akin to Mary Poppins, South Pacific’s Nellie Forbush, and Beauty and the Beast’s Belle all rolled into one.  Kelly’s voice is sweet, especially in “What You Mean to Me,” a duet with Jordan, but her voice has some unabashed strength in “All That Matters.”  These moments are too short, too sweet, and too few and far between to do the Broadway/West End actress and singer artistic justice, or to allow for her success in this role.

To say that the book and score needs work is a common critique. This production runs over two-and-a-half hours, but barely features the incomparable Carolee Carmello (partly due to the role—what do you expect with her glorified cameo in the original movie?) and seems to offer Michael McGrath more than his fair share of solos leading the ensemble in song (“Better” is a weak introduction to the show, and “Hook” barely manages to keep us hooked).  To their credit, the Llewelyn Davies boys (Sawyer Nunes as George, Gemme as Peter, Hayden Signoretti as Jack, and Alex Dreier as Michael) create wonderfully unique characters, despite their limited materials and one-line commentaries dispersed throughout the show’s action. Special kudos to Dreier’s Michael, rendered by an actor dynamic and mature beyond his years.  The boys’ quartet, “We’re All Made of Stars” is a delightful success, conveying childhood imagination and artistic skill.

Paulus creates beautiful stage pictures and innovative storytelling for this dramedy.  She captures our hearts with the joyful energy of “Believe” while trying to fight for our minds with the magical introspection in the “Prologue,” “Circus of Your Mind,” and “Stronger.”  The musical’s focus pulls in too many directions, though; we never feel like we have a clear sense of what’s coming next, or from where it is we’ve come.  We escape into our imaginations with Mia Michaels’s outstanding choreography.  Michaels brings her signature sense of movement and storytelling by freeing her dancers’ bodies in magical ways.  With each twist and turn, jointed movement and striking pose, the actors and dancers come alive as gorgeous stage pictures.  Her work in “Neverland Reprise” and “Rearranging the Furniture” is stunning, and Melanie Moore deserves exceptional accolades for her work as the on-stage Peter Pan, a role that brings as much youthful curiosity and boyish independence as needed to surpass the source material.  Despite such strong movement and presence throughout the production, Act II’s “Finale (All That Matters)” is disappointingly devoid of any of the creativity in the Act I finale “Stronger,” which awed with stunning ropes and acrobatics.  Finding Neverland required us to have awoken our imagination in time for the finale; instead, we were forced to endure a “stand-and-sing” rehashing of the musical’s themes.

Paulus and Weinstein assemble a top-notch production team with high artistic integrity and skill, most notably that of Scenic Designer Scott Pask, Costume Designer Suttirat Larlarb, and Lighting Designer Philip S. Rosenberg.  The colors these three designers negotiated and precisely executed made for a thrilling ride to Neverland and back, invoking shadows and mixing the real with the sublime. One of the best scenes was the Kensington Gardens; Pask provides enough greenery for Rosenberg to light and articulate the bright cheerfulness of a (rare) beautiful day in London.  The Act I finale, despite its forced thematic elements which felt like those of a weak knock-off of Wicked’s “Defying Gravity,” was wonderfully designed and executed; “Stronger” just felt weak and like a cop-out solution to the necessary rising action for the end of Act I.

Finding Neverland is not found yet. Despite the considerable talents working on the show, the production is stifled by the commercialistic yearnings of the musical’s producers who are eyeing the Great White Way, rather than enhanced by the refreshing and daring artistic integrity under which the American Repertory Theatre is used to thriving.  With an additional $11 million slated to be pumped into this musical before it catapults into New York, and at least two big role replacements rumored to occur, Broadway audiences could experience an entirely different Neverland than Boston’s theatre-going crowd did.  At its heart, A.R.T’s Finding Neverland beats with sincerity and breathtaking performances; the magic, however, still feels tethered to the unmistakable charm of earlier Broadway fairy tale and storybook adaptations.  To ride to Neverland-heights, the musical must bring a new bag of pixie dust in the form of a new score and tighter direction. Right now, Finding Neverland is just a Lost Boy who doesn’t know that he needs Mother Wendy to save him.