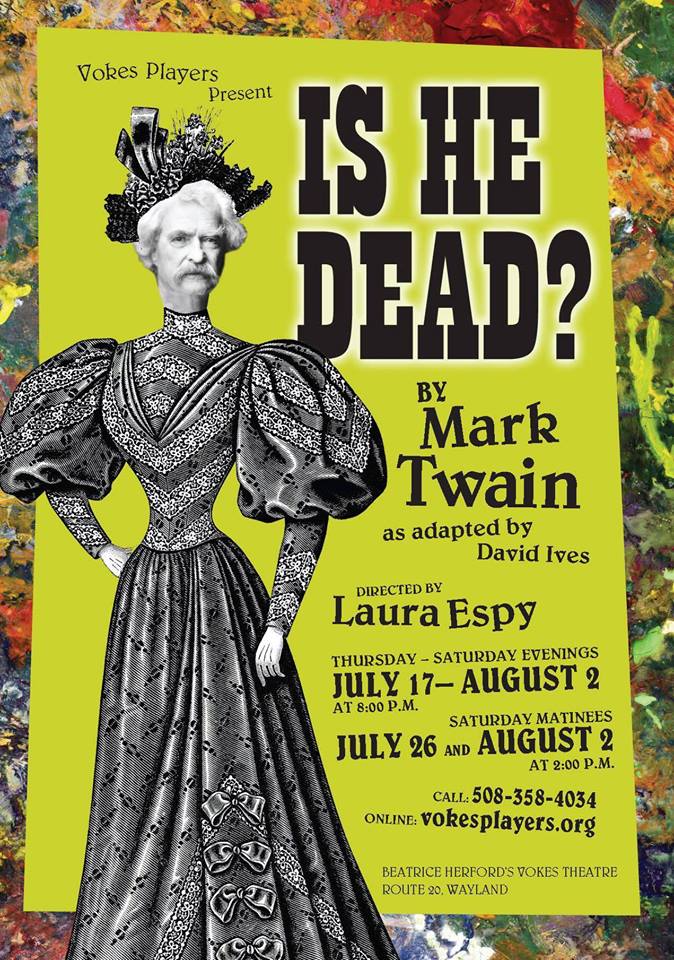 Is He Dead? Has a Faint but Steady Pulse…

By all counts, Is He Dead? should have been a side-splittingly funny night of well-produced theater. Vokes Players has been putting up some consistently strong productions lately, and with Laura Espy at the helm as director, I was looking forward to seeing this rather unusual show in this quirky little venue. The show delivered on some counts and fell flat on others, making me laugh exactly when I should have, but not always as hard as I should have.

Is He Dead?, written by Mark Twain and adapted by David Ives, is the story of Jean-Francois Millet, a brilliant but struggling artist whose friends hatch a plan to fake his death, thus driving up the value of his artwork. Comedy ensues as Millet then pretends to be his own sister, Widow Daisy Tillou, and through a series of farcical encounters carries out the plan to dig himself, and everyone else, out of debt. The piece is hardly well-known at all, so I have to applaud Vokes for taking this on.

Millet is played masterfully by Todd Yard, thank the stars for that. Yard is a brilliant comedian with a solid understanding of the timing of a farce. Onstage nearly the entire show, he is electric in every scene, serving as the anchor for the text and the production.

The supporting cast does well itself, especially with Nick LaPete in a series of small, yet punchy roles. LaPete lends a helping hand to some otherwise dull scenes with his quirky presence and strong character choices. I have to give him special kudos for managing to play off a faulty fake mustache and turn it into a moment the entire audience appreciated and applauded for.

Jason Rutledge also does a nice job as Hans von Bismark, or Dutchy, a bit of a bumbling sidekick who adds plenty of situational comedy throughout the show. Along with Brian Moyer as Agamemnon Buckner and Christ Deter as Phelim O’Shaughnessy, the three make up a sort of Three Stooges type bunch who fumble their way through life. Rutledge was the standout amongst this little group, but I have to say that I have seen him in a few shows now and while I always find him to be good, he is starting to turn into a one-trick pony for me. His Chris Farley-esque interpretations are quite funny, but lack versatility and depth.

The costume design by Elizabeth Tustian was exquisitely detailed and textured, with beautiful, strong silhouettes and shapes. I wish the rest of the production values were as detailed as this, but alas, this is where the show falters a bit. Most notably, I had a hard time understanding the applause at the major set transition in the show. During intermission, we move from a small, broken down little studio to a grand drawing room in Paris. When the curtain opened on act two, the audience showed their appreciation, but I couldn’t help but notice that the grand drawing room was a simple series of stock flats with painted, un-dimensional detailing and some unfortunate oversights, such as remaining pencil lines from when the patterns were traced out.

Regardless, I have to say that Vokes did manage to provide a rather enjoyable night of theater, carried through by a few really strong performances. There were certainly moments where I wished for just a bit more, especially from production values, but overall, the night was well-paced and worth the drive out to Wayland. By the end, it seemed clear to me that Espy is best suited to directing musicals (perhaps it’s because she chose to choreograph the curtain call…) so I look forward to seeing her Avenue Q at the same venue later this season.