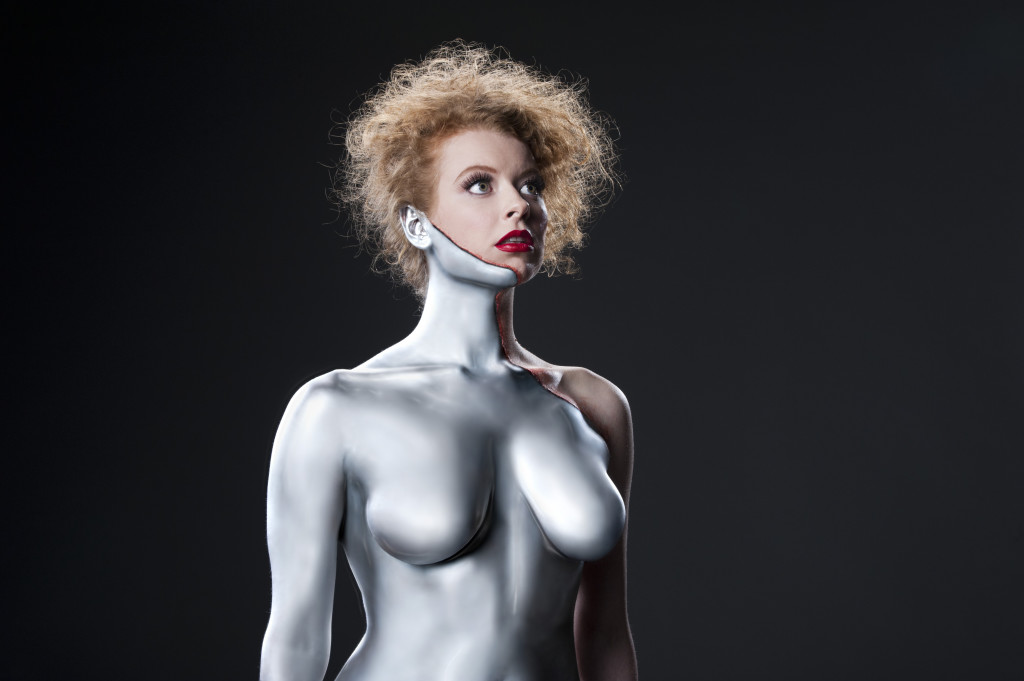 Virtual Stage’s Broken Sex Doll, which opened this past Friday with Magnectic North in Halifax, was a little bit like a bad one-night stand: awkward, no heart, and way too long. Sure, the one-night stand sometimes looks good. They can sometimes even dance and sing real good. But when you get right down to the act of getting someone off, Broken Sex Doll didn’t just leave me wanting more, it left me cold.

The year is 2136. We are placed in a world where humanity is obsessed with a virtual experience called“feelies” in which you can record your lived experiences, upload them to youtube, and have friends and strangers relive them. In a feelie, you can hear, smell, taste, and see the experience of another person, and thus find escapism by proxy. The only sense that has not been developed in the feelie is touch. Until now. Our hero Daryl, just waking up from a seemingly normal sense upgrade, discovers he can record the sense of touch! So begins his journey to record his sexual acts with sex robot Ginger 3000 (complete with custom-made vagina) on his road to becoming famous. That is, if he isn’t stopped by the famous feelie star, The King, and his possessive mother. Oh, and it’s a musical.

Now, when I read that Broken Sex Doll was a sci-fi musical about a future addicted to high-tech porn, complete with laughs and an unexpected love story, I was pretty excited. I imagined that this may be some kind of ironic or satirical exploration of sex and technology, all explored through tongue-in-check songs. Any maybe this was the goal. But unfortunately, any hint of progressive or political irony was completely absent. It was kind of like that guy that you dated in university (or may it’s still the one-night stand person), who thinks that their jokes are funny and ironic, but really they’re just kind of dumb, any maybe even offensive.

Example? Oh where to begin. While songs such as “I can’t get it up,” had potential to be a funny exploration of what erectile dysfunction must be like in a hyper-sexual and masculine world, the Vanilla Ice vibe had me rolling my eyes. I really enjoyed the refrain of “I’m coming, I’m coming, I’m coming…” in the song where the ensemble masturbates to Daryl’s groundbreaking feelie; yet the conclusion that all the women loved it so much they now want to get a sex change is more than slightly problematic. Finally, while the pre-interval song “I’m gonna be big,” was catchy and fun, and I did chortle at the line, “and if you can’t deal with it you can suck my balls!” something was missing. We didn’t care about his sex-crazed world. We didn’t buy into their search for fame through fucking. And so, with Broken Sex Doll, you just have people singing about dicks, fucking, and masturbation for two and a half hours.

There were one or two clever moments. For all the show’s flaws, the cast was clearly incredibly talented. Andrew Cohen as Daryl, was particularly excellent. He explored his character’s innocence and sweetness to great effect, and his comedic timing and vocal skills did not go unnoticed. The song “No More,” performed by Ginger (Chelsea Rose Tucker) and a chorus of broken sex dolls (Georgia Valéria Swinton, Alex Guillason, and Adriana Simone Ravalli), was the highlight of the show for me. “We’re not going to let them treat us like whores,” they sang as sex doll rejects, signaling a turning point in the story. This number was both catchy, beautifully performed, and well choreographed, especially with one robot’s detached legs dancing along with the others from the other side of the room.

However, when, in that same number, you have one robot screaming about how they are slaves, you can’t help but notice that the entire cast is white. Perhaps this statement is neither here nor there. And yet, in playing with trope of intolerance such as racism and homophobia (robophobia in this case), as the show does, it’s difficult to ignore the whitness of the cast members. And while we’re on the politically correct stint, it is worth noting that all the women in the show are either bitches, sex objects (literally), or angry mothers (played by men, of course). There were a few promises of, dare I say, feminism, which ended up falling flat. In the same breath that Ginger 3000 asks, “men program women all the time, why can’t women do the same,” she also apologies for her (almost) progressive actions. There was another great moment where I thought that Ginger 3000 had choked a man with her vagina (!), only to discover, much to my disappointment, that he had only been stunned.

Finally, I guess what Sex Doll was really missing was something more. We all left the theatre (some of us at intermission) uncomfortable, exchanging awkward smiles or wide eyes, or just getting out of there as fast as we could. What was missing, as is the case of all one-night stands, was love. Yes, by the end of the show, we were left with the moral that love is a deeper experience than pornography; the closing number, “plug into your love,” aimed for the moon with this love-is-more-real-than-sex message. And yet, after being subjected to constant mention of dicks and fucking robot vaginas for over two hours, you’ll forgive me if I don’t buy your post-coitus love message.

The worst thing about a one-night stand isn’t that it’s bad, but that it’s boring. You make the noises, and you move through the motions, but really, you just want to go home and sleep. Like a ‘real’ broken sex doll, there was something about Broken Sex Doll that screamed of fabrication—never at any point did we get the sense of the real heart, or emotional core of the piece. I guess you don’t fall in love with the one-night stand, do you. Especially if all he does is talk about cocks, tits, ass, and his mother.