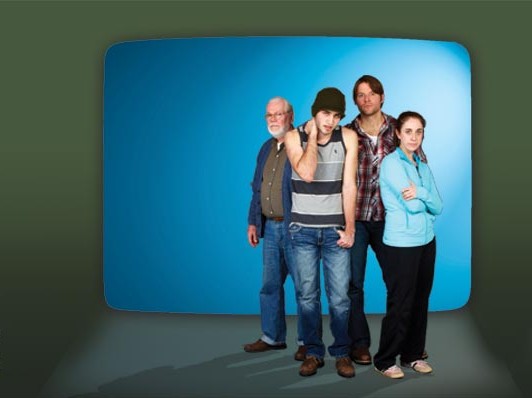 I love reality television. I do. I’ll watch Real Housewives of just about any city (except for Miami), and, if it’s on Bravo, I’ll probably watch it (except for Millionaire Matchmaker; something about rich people clumsily falling in love is just not compelling to me). I’m pretty unashamed about my love of trash TV, but one has to question just how much “reality” goes into producing these unscripted dramas, right? I mean, my heart almost broke when I found out that couples on House Hunters are rarely actually hunting, and they have usually already made a purchase and just stage the other two house tours, but I digress . . .

Zeitgeist Stage Company’s latest production, Good Television, addresses just that issue. Rod McLachlin’s script focuses on Connie (Christine Powers), an addiction-counselor-turned-television-producer who is working on a television series in which addicts are followed for a week, told they are starring in a documentary to help youths avoid drug use, and surprised with a family intervention and offered treatment services. Sound familiar? Ironically, McLachlin’s wife was a producer on the hit A&E series, which more than vaguely sounds like the fictitious show in his script.

And therein lies the problem: the script.

McLachlin’s script is shy and plays a game of Chicken with the issues he is trying to address, but he clearly blinks first. Instead of really tackling the issues of exploitation, lack of moral conduct, etc., he merely brings them up and then subverts his own attack with glib jokes and unwieldy exposition.

On top of that, all the expected stereotypes are there: dying mother, abusive and absent father, over-taxed big sister trying to hold the family together. Throw in a little sexual abuse, an ex-husband for the sister and a couple kids of her own and you have the makings of a delightful cliché. Oh, and it’s all set in a single-wide trailer in the south, ya know, just for fun.

Powers does what she can with the script and fights her way through some of the unfortunate writing. Her character serves as the only moral voice in television production, questioning the executives’ motives and expressing her frustration at being asked to double production with no added support. She cares for the subjects whom she chooses to follow and doubts that the series’ newest target, Clemmy (Benjamin Lewin), can actually make a full recovery. As the producers decide to move forward with Clemmy despite Connie’s trepidation, she is forced deeper into doubt as she finds out more about the family. Ultimately, the play reveals some facts about her character that make us understand why she is so invested, namely that she was an addict herself and that she had lost a patient in the past.

Director David J. Miller also does what he can with the script. Miller is known for directing stunning renditions of thought-provoking theatre, so my expectations were high, and, for his part, I was pleased. His pacing is perfectly pitched, and his staging interesting and dynamic. I am amazed with any director who can make that tiny black box at the Boston Center for the Arts work, and Miller does just that, and more.

In addition to his role as director, Miller also tackles the scenic design, and expertly so. The bulk of the set design focuses the audience to the center of the stage and the inside the Clemmy’s family trailer. Every detail, including the cheap wood paneling and light fixtures over the tiny kitchen were spot on. The downstage areas were designed with cold metal and plastic tones to represent the offices of the television production company, and they provided the perfect juxtaposition against the wood and orange-toned dated furniture in the trailer. Jeff Adelberg’s lighting design enhanced and complemented Miller’s designs, and David Wilson’s clever sound design provided a great score for the production.

All the technical elements were there and the performers were clearly invested. I wish they had better materials to work with and I hope that MacLachlin continues to work on his script because the ideas are great, but the treatment of those ideas is where Good Television falters. If it were me, I would cut almost all of the scenes in the production offices, turn the producers into caricatures, drop half of the clichés, and spend the rest of the time really fleshing out the central characters so that we care about them just a little bit. Now that, in my humble opinion, would turn Good Television into “Great Theatre.”