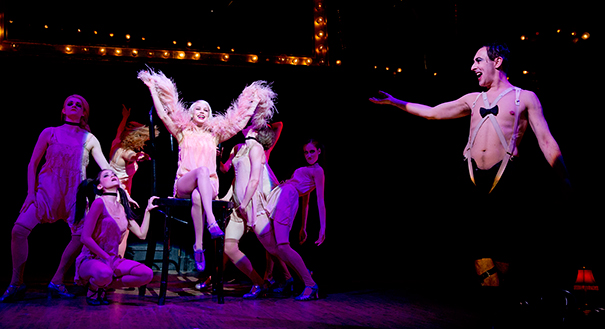 Broadway Scene: From Cabaret to Hedwig

During our hiatus, Broadway shows were opening nearly every other day to get their openings in before the Tony Award nomination qualification deadline.  Needless to say, it has been a busy few weeks and, thankfully, producers have saved some of the best shows this season for last. To kick things off, I am bringing you reviews for two of the mostly highly anticipated musicals of the season.

“Can’t put my finger on what lies in store, but I feel what’s to happen, has all happened before.”* If I had written a review of Roundabout Theatre Company’s production of Cabaret in 1998, I would be unashamedly reposting it right now. Unfortunately, my 12-year-old self saw little point in critically reviewing productions so here I sit pondering Roundabout’s choice to revitalize the exact same production of Cabaret, which they produced in 1998. The production was well-received in 1998, and, unsurprisingly, this revived revival still packs a theatrical punch.

Set in 1931 in Germany, shortly before the Nazi party rose to power, Cabaret is the tale of the Kit Kat Club, a risqué German nightclub orchestrated by the Emcee (Alan Cumming), and a small group of diverse individuals who deal with the political power shifts in Germany in different ways. Teeming with political and social commentary, Cabaret follows the exploits of Sally Bowles (Michelle Williams), an ignorant performer at the Kit Kat Klub who cares little about anything outside of herself, an American writer named Clifford Bradshaw who, unbeknownst to him, gets entangled in a smuggling project for the Nazi party, and Fraulein Schneider (Linda Emond) who runs a boardinghouse and who falls in love with a Jewish fruit market owner named Herr Schultz (Danny Burstein). What begins as an uplifting celebration of culture and excess slowly reveals itself as the breeding ground for unmitigated hatred towards Jews, homosexuals, and many others – the breeding ground for the rise of Hitler and the inevitable deaths of over six million people.

Numerous songs from Cabaret have gone on to become Broadway classics, including “Willkommen,” “Money,” and “Cabaret,” and those favorites remain show-stoppers in the current production. Unfortunately, there are aspects of this show that are beginning to feel worn. While numerous themes in the play are worthy of discussion and the historical context of the show will always merit revisiting, some parts of the script have almost a clichéd quality about them now. For example, Cliff’s tirade about Sally’s inability to recognize or care about the changing political climate in Germany ends with an exasperated statement on par with “if you’re not against them, then you are with them.” Also, when the Emcee begins to dance with a person in a gorilla suit, singing “If You Could See Her” about his love for the dancing gorilla, his delivery of the line “she wouldn’t look Jewish at all” is still delivered with revelatory intonation but lacks shock value after so many revivals.

While the relationship between Cliff and Sally may be the intended focal point of this story, the love story between Fraulein Schneider and Herr Schultz is far more intriguing. Linda Emond and Danny Burstein give lovely nuanced performances as Schneider and Schultz, and the pair shares an especially memorable dance with a pineapple that is delivered with such bravado that one cannot help but smile.

**Because, really, who can?

If you had told me last year that an off-Broadway cult classic about a bitchy East German transgender wannabe rocker would find an audience on Broadway, I would have told you that you were out of your Hedhead. Hedwig and the Angry Inch is simply too campy, simply too risqué, and simply too absurd a story to share the same stage that recently housed the Globe’s production of Shakespeare’s Twelfth Night. It turns out that I was simply wrong – I once again underestimated the power of celebrity. Hedwig has drawn crowds to the Belasco, and I am quite confident that most of the audience knows little of Hedwig’s theatrical or movie past. Audiences are packing the Belasco to see the man behind Hedwig: Neil Patrick Harris.

Hedwig is a difficult script to summarize, and, quite honestly, is really freaking weird – in a good way. Taking place at a one-night only concert (made possible due to the recent closing of Hurt Locker: The Musical, which is a running gag in the show that is made complete by the fake Playbills littering the floor*), Hedwig shares her life story, accompanied by her mistreated husband Yitzhak (performed by the marvelous Lena Hall) and the band The Angry Inch (the talented band Tits of Clay). Hedwig has long dreamed of achieving superstar status as a rocker. While she wears the self-involved attitude of a woman who has hit it big, Hedwig is no celebrated musician and her life has been marred by tragedy, abuse, and disappointment. Hedwig describes how she grew up poor in East Germany listening to music on the radio, and, after undergoing a botched sex change operation that was requested by her boyfriend, she made her way to America, only to find herself abandoned by the same boyfriend shortly thereafter. To add insult to injury, the recent object of Hedwig’s affection has rocketed to stardom by singing her songs . . . and promptly ignored her existence. Yes, life is rough for Hedwig, yet, during the recount of her life story, she comes to several realizations about who she is and appears to accept who she has become.

Hedwig is less a staged drama and more a dramatic rock concert. In fact, the soundtrack for the show is among the most brilliant and beautiful to have ever graced a Broadway stage. I am slightly obsessed. Among the highlights, rock ballad “Origin of Love,” accompanied with Benjamin Pearcy’s gorgeous and imaginative projections depicting the folk tale described in the song, is as close to a perfect theatrical experience as I have had. Moreover, it is hard not to bob your head along with the catchy tune “Wig in a Box,” and I dare you not to throw your hands up when the call to do so rings out in “Midnight Radio.” Hedwig demands audience participation but the effort is not forced – it flows naturally from a script, score, and cast that invite participation.

Speaking of the cast, the group of six performers remain on stage for much of the show. The band Tits of Clay, featuring Justin Craig, Matt Duncan, Tim Mislock, and Peter Yanowitz, plays a solid instrumental set, and they look like they are there to perform one hell of a rock concert rather than to perform in a Broadway show. Tits of Clay is joined by two vocalists: Lena Hall and Neil Patrick Harris. Hall has an awe-inspiring set of pipes and is a sonorous force to be reckoned with in the finale. Her performance as the emotionally abused Yitzhak is subtle, and Hall’s Yitzhak is an ideal counterpart to Harris’ loud, spotlight-seeking Hedwig. Of course, the show’s namesake is the true star of this show, and NPH is more than capable of bearing the weight of the wig. In fact, “capable” is not the right word. “Masterful,” perhaps. Or “comfortable.” Vocabulary aside, with a wig on his head and fishnets disappearing into his killer high-heeled boots, NPH is a true joy to watch as the bitingly cruel, imperfect, lonely, frustrated, insecure, and, resilient Hedwig. NPH makes scripted lines sound like improvised comedic banter and undertakes a substantial physical and emotional transformation on stage – a performance that appears both fearless and flawless. My only critique of NPH is that, while he has a strong voice, his voice is more pop than rock.

Set designer Julian Crouch has crafted an entertaining and practical set (allegedly left behind from Hurt Locker: The Musical), and Arianne Phillip’s wild and trashy (yet fun) costumes are showstoppers in their own right. However, a character named Hedwig would be incomplete without some spectacular hairpieces, and Mike Potter’s wig design does not disappoint.

It is a rare gift to find a director who adeptly and artfully constructs a complete vision for a show and successfully executes that vision, from the technical design to the performances, but director Michael Mayer has done just that with Hedwig and the Angry Inch. I would be remiss if I did not mention that the producers of Hedwig are doing something quite exceptional by donating portions of the Hedwig ticket proceeds to Hetrick-Martin Institute, which is a non-profit organization that supports young people regardless of sexual orientation or identity.  That Hedwig, she is one class act.

*They are exceptionally detailed and even list other plays that are allegedly on Broadway, including London’s massive smash – British Couples Being Serious in Sweaters.