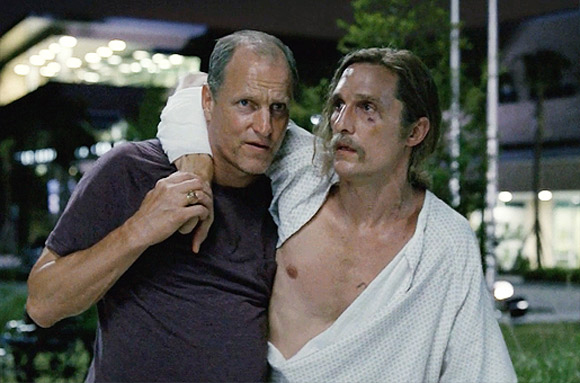 If television shows and video games could be paired in the same manner that cheese and wines can be paired – and who even said that’s a thing – I’m fairly certain that I stumbled into an apex pairing of these two disparate entertainment forms. It would seem that True Detective goes quite nicely with a late night fix of Dark Souls, a game in which you must die repeatedly, in every way possible, for hours on end just to figure out how to get through a damn room.

“Life is a flat circle,” you’re certain to hear while playing the same section on endless repeat. There’s a certain toe dip into madness you feel with this show and video game pairing, one that could even inspire trippy visions of your own once the television is off and the room is finally quiet.

The dark tonal similarities are a clear link between the two; the maddening pacing is something of a similarity as well. Both pieces understand the payoff of a new clue or defeated boss – and acquisition of all said boss’s soul money – means more when the clock is bled up to the edge of frustration. Of course, the eight hours of True Detective’s precise pacing can’t hold a candle to the NINETY(!) hours it took me to beat Dark Souls. Even so, no other cop show has ever rationed plot points as conservatively as True Detective just did. It will remain a hallmark in the genre precisely for its meandering, visceral nature.

So what if Ice-T could have solved the case in his new Law & Order: New Orleans SVU spinoff within the broadcast hour? “I think we should look into that creepy ass church groundskeeper that keeps talking in a British accent. I bet he’s connected with these cult killings,” he would have growled. It’s pretty much guaranteed that a lot less people would have died if Ice had been on the case instead. But that’s okay, because we got eight episodes worth of existentialism and character development with two academy award-worthy actors (I feel one coming for you, Woody).

Ultimately, the joy of both True Detective and Dark Souls is derived from the struggle and slog, rather than the conclusion. By that point, after the aesthetics have lost luster, reaching the conclusion is all we want. Whether that conclusion is sufficiently satisfying is a secondary concern. That final boss couldn’t die soon enough. Gunshot to the back of the head or pyromancy flame to the mouth, just die already and get me out of this bleak landscape, “It’s all one ghetto, man. A giant gutter in outer space.”

In all honesty, both True Detective and Dark Souls lost me a little towards the end, right around the same point in the respective journeys. I switched over to lighter fare for a two-week stretch that put me behind the eight ball on True Detective. I played the new South Park video game and watched the Bachelor finale – would love to see Rust Cohle in a locked room with Juan Pablo – and only returned to finish my duty as a show recapper and “serious” gamer this past week.

I finished both pieces of entertainment Friday night, which is one more reason why they’re linked in my head. The final boss in Dark Souls was easier to kill than I expected since I just circled around a rock throwing flame spells while he swung his large sword. The final boss in True Detective was perhaps the most conspicuous dude in all of Louisiana. With a seven-episode build-up to his introduction, there was little chance he would live up to his role, but church painter Errol Childress was still a head scratcher.

“This guy is the ultimate evil in the entire corrupted religious state of Louisiana?” You’re left wondering after his introduction at the end the seventh episode when he’s found mowing the grass in the middle of nowhere. It’s confounding how he could be so centrally important to the massive conspiracy. What’s he like during the meetings of cult figures? Is he fingering his half-sister – or whomever that nutty woman is that he lives with – while kicking his dog? These are questions I couldn’t stop asking while watching the finale. It all came back to, “This guy?” At least in Dark Souls, the yellow king wears a damn crown.

All said, the trip to Carcossa in True Detective is a fun journey into an underground labyrinth where Cohle gets to trip balls and witness a spiralling black hole above the throne room. He drops his guard and allows Baby Louie to stab him in the abdomen. It’s a gory and well-choreographed sequence, optimally realized despite the revealed identity of the big baddie. Within his weird underground city – unknown to Louisiana’s archeological history – Errol takes on a hulking form that grazes his intended evil stature. He hits his most frightening note while lifting Cohle by the knife imbedded in his abdomen.

“My life’s been a circle of violence and degradation as long as I can remember. I’m ready ready to tie it off.” Rust Cohle states earlier, before his gruesome stabbing, inclining the audience to assume his oncoming death.

Yet, he doesn’t die. He survives and acquires some semblance of enlightenment from his brush with death. To my surprise, the show ends on a hopeful note, sung by Cohle himself during the final bromantic moment between the two partners, out in the hospital parking lot. Despite the betrayal of revenge sex between Hart’s wife and Cohle ten years prior, the two have come full circle in their relationship, settling into a strong brotherly (or Bro-y) love. Cohle responds to Hart’s statement about the overwhelming blackness of space with his most optimistic line of the series, “Well, once there was only dark. If you ask me, light’s winning.”

The final shot of the season is of the sky where precious few dots of light can be seen, floating there like bonfires of safety in the distance. I’m left spent now, looking forward to a layaway of levity before undertaking another season of this morphing show, as well as the sequel to Dark Souls that was just released. I’m thinking I’ll hold off on the game until the show comes back around.