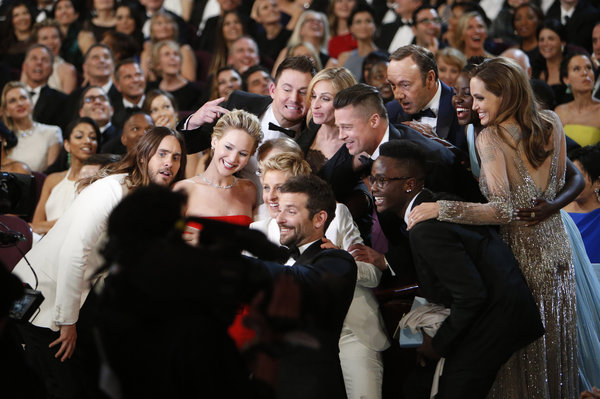 I realized, by accident, that I had seen almost all of the best picture nominees this year (I’m sorry, Nebraska and Dallas Buyers Club!). Unlike in years past, I hadn’t sought out the best movies of the year – they were the same as the movies I just really wanted to see. And without fail, I sort of loved all of them.

And so it was that for the first time in a long time, I watched the Oscars without any of my trademark anger or grumpiness. It turned out to be a fitting way to do it – with Ellen Degeneres hosting and a handful of feel-good moments, this turned out to be the least controversial Oscars ever. Alfonso Cuaron won for Best Direction for a movie that was, shockingly, the best directed. 12 Years a Slave won for Best Picture, and whether you agree with that or not (I do!), you gotta admit it’s a powerful film that people will still remember years from now.

Add to that some expected, but nice, acting Oscars (I just want Lupita Nyong’o to win everything, and despite missing DBC, I am loving me some McConaughassaince), and you’ve got the makings of a frankly beautiful, classic Oscars ceremony. Even the stage seemed to take a deep breath. After years of busy, over stuffed, ridiculous ceremonies, this year’s favored a simple, classic aesthetic, and cool lighting fixtures that looked like the background to a Jay Z art show.

Ellen Degeneres is never going to be quite as funny as Tina Fey and Amy Poehler, but she took a page out of those leading ladies’ book: soft jabs, funny one liners, and a generally inside-Hollywood look at how much fun this crap can be. An Oscars Host shouldn’t overshadow the festivities; as funny as stand up comedy can be, it never plays in the room and generally just makes the whole thing feel awkward.

By and large, I felt like this year actually recognized greatness in movie making, albeit in that typical Academy-narrow way. Frozen won best animated feature, and “Let It Go” won best song, so you know I’m happy (even if Idina did sound like she was coming down with a cold as she belted out my favorite song of the year, and John Travolta inexplicably butchered the name of one of the most famous Broadway stars of the past century). Her won for best original screenplay, and since I knew it had no chance at Best Picture, I loved it being recognized. The technical awards all went to Gravity, because duh, although I would have loved seeing a little love going to Her’s production design or Captain Phillips‘ impeccable editing.

Some of the onstage pairings felt random or awkward, but I generally liked the camaraderie. I loved the decision to pile those Best Picture clips together, rather than drag it out.  I loved that they stopped with the damn “play off” music, which never seemed to work anyway and always seemed to disproportionately affect those who never get a chance in the spotlight.

There were a lot of genuine emotions on stage this year, such as Nyong’o’s tear-filled acceptance speech or the somber in memorium segment. And the absolute highlight for me was definitely Pharrell’s triumphant, joyous performance of “Happy”, which combined the toned done aesthetic with the genial tone of the 2014 show. It was the perfect encapsulation of this year’s Oscars: unable to be argued with, happy, and filled with such genuine feeling it couldn’t be ignored.