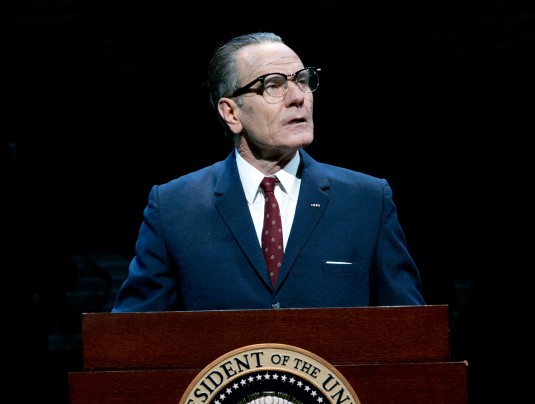 All The Way: LBJ takes on Broadway

Ask the average American under 40 what they know about President Lyndon B. Johnson and they will likely do one of two things: (1) stare at you blankly or (2) start mumbling about JFK’s assassination. Despite having a political science degree and twenty years of U.S.-based education, I know very little about President Johnson.  Don’t get me wrong. My teachers did not ignore six tumultuous years of American history. From JFK’s assassination to Martin Luther King’s assassination,  from the Vietnam War to the counterculture movement of the 1960s, and from the Civil Rights Act to the Voting Rights Act to the War on Poverty – I learned it all. But LBJ was shockingly disassociated in my education with any of these events. Before I saw Robert Schenkkan’s play All The Way at the Neil Simon Theatre, I would have told you that LBJ was foulmouthed and unsophisticated. After seeing All The Way, I can tell you that he was also a manipulative, power-hungry, paranoid, political strategist . . . with a heart (sometimes).

Watching All The Way is like watching a drama produced for the History Channel – it’s the Hatfields and McCoys of the American stage. All The Way is a docudrama that recounts the passage of the Civil Rights Act of 1964 and LBJ’s first year in office while highlighting LBJ’s political maneuvering and egocentric behavior. Beginning shortly after JFK’s assassination, LBJ had one year to gather support for the Civil Rights Act of 1964 before the 1964 presidential elections. However, building a coalition around the bill was hardly easy. A polarizing fight was occurring in his own democratic party between Southern Democrats, who staunchly opposed the bill, and more progressive democrats who supported the bill. LBJ was also feeling pressure from outside forces such as the peaceful demonstrations  organized by various civil rights groups (as well as the less than peaceful responses to those demonstrations), the bureaucratic control wielded by J. Edgar Hoover and the F.B.I., and the developing war in Vietnam. While LBJ is certainly a colorful central character, Schenkkan heaps a healthy dose of other intriguing individuals into the plot, including Hubert Humphrey, J. Edgar Hoover, Martin Luther King Jr., Richard Russell,* George Wallace, and Strom Thurmond.

This summary exposes the greatest failing of the plot – it is as much an educational tool to explain how a bill really becomes a law** as it is a dramatic analysis of a deeply flawed, yet powerful, man.  While history and political junkies (like me) will likely enjoy the dramatization of this riotous period in American history, anyone who does not recognize the six names in the paragraph above may find himself or herself incredibly bored. The play assumes a great deal about the audience’s knowledge of political events and power-players during the 1960’s and moves through the year at break-neck speed, taking very little time to explain the implications of the actions on stage.

Director Bill Rauch did an excellent job of staging All The Way to bring dimension to the plot. LBJ is nearly always center stage as the puppet master of the civil rights bill, but secondary characters fill the stage around LBJ – ready at a moment’s notice to comment on the bill’s evolution. The staging emphasizes the constant pressure and incessant activity surrounding the President day after day. Moreover, Rauch has the actors spill out into the house to incorporate the audience in the political rallies and speeches occurring on stage. The audience is, after all, the voting population.

There is one remarkable discovery that I made during All The Way – an extraordinarily talented actor who prevented this play from becoming the mundane biopic that it easily could have become. I’ll share his identity, but try to keep it on the down low. I’d hate for others to discover how incredible he is and turn him into some award-winning actor who stops taking challenging and interesting roles (A-listers have a bad habit of this). Ready? His name is Bryan Cranston. All of my friends who have spent the last five years trying to get me to watch Breaking Bad are currently rolling their eyes. Admittedly, I ignored their pleas and am only familiar with Cranston from Argo. Forgive my incredibly late arrival to the Cranston-bandwagon, but the man is a phenomenal actor. His performance embodies the brash, relentless, and self-important characteristics that defined President Johnson, and he achieved a feat that very few actors achieve – he made me forget that I was watching Bryan Cranston because he was such a damn good LBJ. The rest of the cast is talented, with particularly strong performances from Rob Campbell as Gov. George Wallace, William Jackson Harper and Eric Lenox Abrams as young leaders in the Civil Rights Movement, and Peter Jay Fernandez as NAACP leader Roy Wilkins. Of the entire ensemble, the most disappointing cast member is Brandon J. Dirden who, while well-spoken and believable as the weary leader of the Civil Rights Movement, fails to capture of the gravitas or command of oratory skill needed to be a convincing Martin Luther King Jr.

For those theatregoers with an interest in history or politics, All The Way is an engaging few hours of theatre that will not shed any new light on the passage of the Civil Rights Act of 1964. For those theatregoers who could care less about the intricacies of political reform, Bryan Cranston is an incredible and worthy reason to check out this show anyway. If nothing else, both crowds may learn a thing or two about LBJ as a man or, at the very least, feel like they spent a few hours in his presence.

All The Way will be performed at the Neil Simon Theatre until June 29.

*One of the three Senate office buildings is named after Senator Russell. You can thank my time spent as a Senate intern for that piece of information. I give an exhilarating tour of the U.S. Capitol building if you’re interested. It has ghost stories, highlights the statue in Statuary Hall that looks exactly like President Bartlett from the West Wing, and a few past tours even included sitting (and singing) on the floor of the House of Representatives. I clearly missed my calling.

**Hint, think less like Schoolhouse Rock’s “I’m Just a Bill” and more like The Simpsons “I’m an Amendment to Be.”