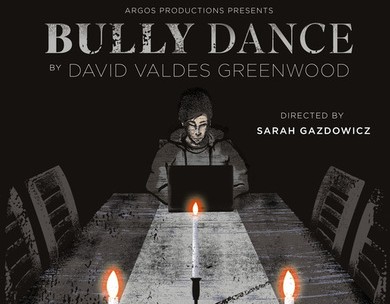 A Requiem for a Dance

Difficult material often makes for the best theatre. With the constant barrage of stories about public shootings throughout the country, you cannot turn on a major news station without confronting the unspeakable terror of hatred and uncertainty. From this despair comes the provocative and timely Bully Dance written by Huntington Playwriting Fellow David Yaldes Greenwood. Under the creative and empathetic guidance of exciting director Sarah Gazdowicz, Argos Productions creates a moving and memorable piece about what it means to forgive, even in the face of darkness and confusion. There are no easy answers, either in the play or in real life, and Greenwood and Gazdowicz with the help of some truly outstanding and diverse female actresses help lead us onto a path of understanding.

Let’s be honest, talking about a shooting is not easy. Talking about a series of shootings seems damn impossible without bordering on the cliché or trite. Greenwood creates a world of unique characters with stories and lives beyond the tragedies in which they experienced. Gazdowicz is careful to follow Greenwood’s focus; it is not a suspense thriller or a terror, despite some engaging and frightening moments (don’t worry, to my knowledge, no one was harmed in the making of this production). The play is a requiem. While the play is careful to stage the deaths of some of the victims, the focus is inevitably on the living. The result is breathtaking and haunting. Underscored with the beautiful compositions by Sam Beebe, the play is a journey from darkness into (or at least toward the light) (by the way, the lighting was simply and effectively designed by Connor Van Ness).

The play opens with each of the characters entering the space and removing his or her shoes. I can think of no better reflection of spirituality and an emotional journey than removing your shoes. It shows comfort, it shows an ability to sit and wait (no one is going to go running off without his or her shoes), and it shows contemplation (sit with your shoes off for a few minutes and tell me that you don’t feel more at ease). And we’re silently introduced to each of the major players in this story: the victims, the survivors, the bystander, and the perpetrator. Each of the actors infuses these silent moments with such raw personality that you know (and want to know more) about each of their stories: what led them to these moments, what do they seek, and what do they know. Silent storytelling is a brilliant device used effectively by only the best directors; Gazdowicz and her cast show that they are more than up to the challenge.

Narrated by Nola (2012 My Theatre Award Winner Juliet Bowler), a passenger who is affected by a shooting on a bus while traveling from Maine to Boston, the play searches for a way of dealing and understanding the tragedy. Bowler’s voice is musical and her emphasis so poignant and touching. She knows which chords to hit and when to push, when to pull away, almost like an effortless musician and dancer. The beautiful dichotomy between the two widows of the men who are killed too quickly is especially good. Alice (Lida McGirr) and Tammy (Charlotte Kinder) couldn’t be more different, but the bonds between them are inescapable. Their ability to play off each other’s dynamics is a wonderful testament to actors listening and reacting. Also linked to these two women is the young shooter’s mother (Veronica Anastasio Wiseman), a woman who is trying to make sense out of an unspeakable horror of not understanding someone whom you love. Wiseman is at her best, carefully challenging our notions of what it means to grieve and who is allowed to grieve. Blame is too easily shifted and placed onto those who struggle for answers and understanding. Wiseman’s confusion plays in contrast to the widows’ anger and resentment, blame and scorn. Their relationships make the play the beautiful storytelling.

While I loved the relationships amongst the cast, I could not appreciate or understand the choices made by Adam Lauver who plays Man, multiple roles including two husbands, a passenger on the bus, and a police officer. The two husbands seemed remarkably similar despite the numerous differences portrayed by McGirr and Kinder as his widows. He seemed less like he was portraying individuals and more like he was playing characters, roles on the stage with lines meant to further the plot. No matter, he fulfills this goal and we move onto the more interesting stuff with the female actresses.

Greenwood is careful not to portray anyone with too many stereotypes; instead, he grounds his characters solidly within the story and incident. Gazdowicz and her cast search for the truth within these characters. The young shooter, Travis (Christopher Nourse) , would be too easy to depict as a monster. In the opening scenes, he seems almost mechanical, an oft-putting choice. However, Nourse transcends my expectations with his honest portrayal. Yes, if anything, this play is meant to shatter expectations and our perceptions of understanding and truth in the wake of tragedy. Mothers of perpetrators can grieve; loving sons can be viewed as evil and unthinking monsters; and, despite our best intentions, bad and unfortunate things happen.

This play is not for the light-hearted, however, maybe paradoxically, it is for everyone. The play is as much about what is as what can be. The play challenges without any easy answers or replies.  The journey with Argos Production is more important than the destination. We are left with our own conception of what it means to move on from tragedy and how we can make sense of random acts of evil and darkness. Finally, I was left with a reminder: we cannot choose what happens to us, but we can choose how we react. As people, we can choose to turn away from the darkness which seeks to consume us and step towards the light, looking for the good within ourselves and others. There is so much good in Bully Dance. Won’t you take time to enjoy the dance?