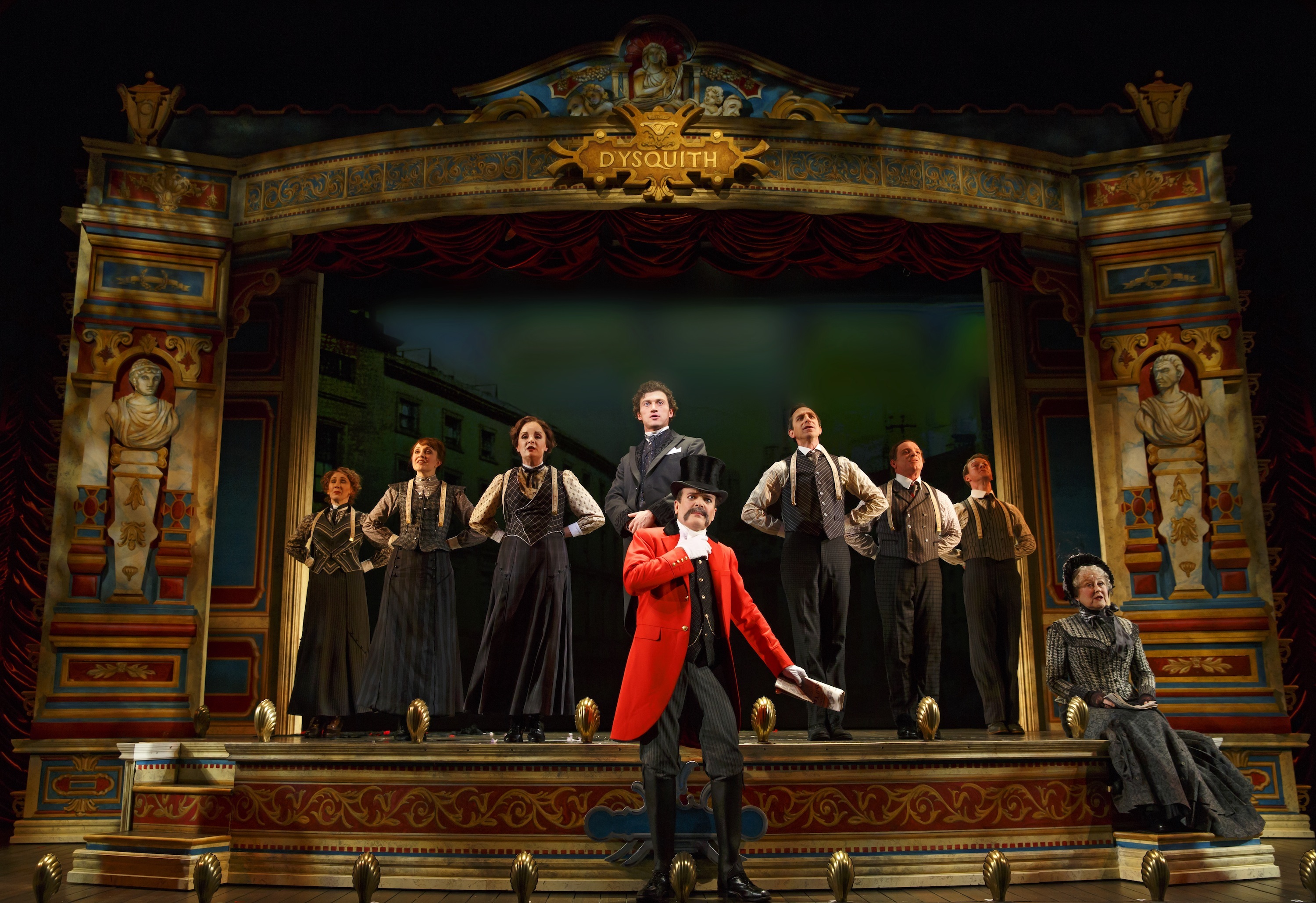 On Broadway: A Gentleman’s Guide to Love and Murder

There are a large number of suspicious deaths occurring at the Walter Kerr Theatre, and, strangely enough, all of the victims bear striking resemblances to one another – and to Jefferson Mays, the gifted actor who portrays every doomed D’Ysquith family member in A Gentleman’s Guide to Love and Murder. Gentleman’s Guide is an artistically clever, visually entertaining, quirky new musical comedy with great potential. Unfortunately, while manifesting moments of real theatrical brilliance, Gentleman’s Guide is an underwhelming production in its totality.

Set at the turn of the century in Edwardian London, Gentleman’s Guide follows the dastardly exploits of one Monty Navarro (portrayed by Bryce Pinkham) – a young man whose beloved and recently deceased mother was disowned and cast aside by her family after marrying for (gasp) love. The heartless family in question? Why, none other than the wealthy D’Ysquiths, including the current Earl, Lord Adalbert D’Ysquith.* Thanks to some information from a mysterious visitor (Jane Carr), Navarro discovers that only eight people stand between him and the title of Earl (plus the monetary and social perks that accompany that title). However, it is absurd to think that all eight of the lineal D’Ysquiths will die anytime soon.  Unless, of course, someone were to help them along a bit. As Monty Navarro undertakes his D’Ysquith family murder spree, he juggles the affections of two women: Ms. Phoebe D’Ysquith (Lauren Worsham) whom Navarro meets while planning the death of Phoebe’s brother (thankfully, she is not in the line of succession) and Mrs. Sibella Hallward (Lisa O’Hare), who is having torrid love affair with Navarro because her rich husband is dreadfully boring and predictable. From the moment that Navarro discovers his D’Ysquith heritage, his life plays out like a sinister soap opera with a British comedic twist, much to the audience’s delight.

Like most shows on Broadway in recent years, Gentleman’s Guide is not truly original. That being said, Robert Freedman had some decent source material from which to write the book for Gentleman’s Guide. The show is based upon the 1907 book Israel Rank: The Autobiography of a Criminal and the movie Kind Hearts and Coronets starring Sir Alec Guinness, which is considered by some to be among the greatest British films of all time. While Robert Freedman’s dialogue is often witty and his characters are generally entertaining in their absurdity, the plot has some pacing issues. Act I includes the rapid introduction of nine D’Ysquiths and the death of seven of them. While some of the D’Ysquiths are integrated into the plot, others appear haphazardly thrown in as afterthoughts to reach Mr. Navarro’s serial killer quota. Not to mention, the characters are sometimes indiscernible from one another due, in part, to their names (there is a D’Ysquith Sr., a D’Ysquith Jr., multiple Lord D’Ysquiths and a handful of Lady D’Ysquiths – try saying that five times fast).

In addition to the pacing, there is the pesky question of Monty Navarro’s murderous motivation. Navarro is introduced as a grieving young man who is head over heels in love with Sibella, a woman who is uninterested in marrying a poor man like Navarro. Navarro is naive and emotional, but none of these traits suggest that he is capable of murder. Yet, he quickly transforms into a psychopathic serial killer who is incapable of connecting with anyone on an interpersonal level. Even his romances with Sibella and Phoebe are remarkably superficial. The question is: what happened? Freedman’s attempts to explain Navarro’s behavior are not particularly believable, and Navarro has a penchant for being emotionally contradictory. For example, Lord Asquith D’Ysquith Sr. takes Navarro under his wing and prepares him to run the family business, treating him like a son as a sort of mea culpa for the ill-treatment of Navarro’s mother. While Navarro agonizes over the thought of killing D’Ysquith Sr., he reacts flippantly when he learns that D’Ysquith Sr. has died of natural causes. So much for caring about the man.

Bryce Pinkham must bear some of the blame for this inconsistency. Pinkham’s Navarro is unassuming. It is hard to believe that the doe-eyed Navarro could comprehend of, let alone execute, his murderous plot. In some ways, Pinkham’s treatment of the character makes Navarro’s actions all the more humorous. However, it also makes his homicidal tendencies all the more baffling. It does not help that Pinkham has very little chemistry with his on-stage love interests. It is difficult to believe that Navarro would kill to gain Sibella’s love, and he does not need to kill to win Phoebe’s love.

Despite some minor issues with the book, the real disappointment in Gentleman’s Guide is Steven Lutvak’s music and lyrics. Simply put, with few exceptions, the musical numbers are altogether forgettable and are secondary to the hilarity ensuing on stage. The musical interludes are often devoid of any compelling melody and some are overcrowded with lyrics. There are a few diamonds in the rough. The duet “Better With a Man” between Navarro and Henry D’Ysquith is a rollicking number, although a bit clichéd in concept,** and the Act II opener “Why Are All the D’Ysquiths Dying” is darkly amusing.

As lackluster as the musical numbers are, the exceptional Jefferson Mays and the stellar creative design team comprised of Alexander Dodge (scenic design), Linda Cho (costumes), Philip S. Rosenberg (lighting), and Charles LaPointe (hair and wigs) make Gentleman’s Guide a show worth seeing. Using the word versatile to describe Mays would be a gross understatement of his acting talents. Mays’ quick changes and fluid transformations from character to character are nothing short of remarkable, and his comedic timing is impeccable. With all due respect to Sir Alec Guinness, I cannot imagine the D’Ysquith family being in more capable hands than those of Jefferson Mays. Mays’ lightning fast costume changes are undoubtedly the work of a talented team behind the scenes who deserve a round of applause themselves.

The set design is unlike anything else on Broadway at the moment, and Alexander Dodge clearly derived some of his inspiration from Monty Python. That’s not a bad thing. It’s a bloody brilliant thing!*** From brightly colored set pieces to talking statues, Dodge’s design does more than set the scene – many times it steals it. Moreover, Aaron Rhyne’s projection design is expertly integrated into the set and, despite my well-documented dislike for projected images in live theatre, the projections are generally well-executed and fit the slapstick tone of the show.

Overall, Gentleman’s Guide is a decent show that, with some musical re-writes and minor tweaking, has the potential to be a great show. And on that, I will stake my reputation as a gentleman. Or, at least, as a lady.

* Only the Brits can get away with such fantastically loaded names. Lord Adalbert D’Ysquith may be fictional, but his presumed namesake, Herbert Henry Asquith, was both a real Earl and the Prime Minister of the U.K. for eight years.

** The duet between an apparently gay Henry and straight Navarro is chock full of suggestive language and double entendres. Funny? Absolutely! Original? Hardly.