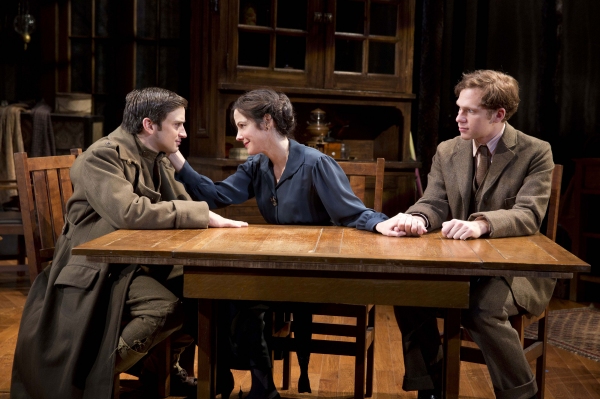 I re-wrote this review three times, which is never a good sign. Do not get me wrong. Sharr White’s new play The Snow Geese is not bad per se, it just left me feeling incredibly nonplussed. Set during the first World War, Snow Geese is a story about adaptation, perception and pretense – it thrusts the audience to a situational tipping point where family façades can no longer be maintained and the repercussions of harsh reality come to bear. Sound compelling? It is. Well, sort of. Sometimes. Truthfully, Snow Geese is a play that must be waited out. Not until halfway through the first act does Snow Geese really take flight, and, even then, it never quite finds its wings.

Snow Geese is set in the Gaesling family’s hunting lodge and opens on the morning of the annual hunt. Despite the jovial atmosphere, it is revealed that Theodore Gaesling (Christopher Innvar), the family patriarch, recently died, and that his wife Elizabeth (Mary-Louise Parker) is distraught by his absence. Elizabeth and her son Duncan (Evan Jonigkeit) try to get everyone in a celebratory spirit in honor of Mr. Gaesling’s favorite day of the year, but the youngest brother, Arnold (Brian Cross), is withdrawn and angered by the household celebrations. The breakfast table is rounded out by Elizabeth’s sister Clarissa (Victoria Clark) and Clarissa’s husband Max (Danny Burstein), who is a caring man despite being ostracized from his community because of his German heritage.

Arnold soon reveals to the entire family that Mr. Gaesling ran the family into financial ruin. At first, Elizabeth is unwilling to hear such accusations, and Duncan refuses to believe that the carefully constructed socialite lifestyle that he leads is built upon a mound of debt and irresponsibility. Arnold, however, lays out the mounting evidence implicating his father’s misdeeds and inadequacies as a businessman, and each member of the family must decide what to do with their newfound financial insecurity.

Elizabeth and Duncan do not handle their misfortune well. Elizabeth loved her husband dearly and not merely because he provided for her (in the words of Sensei Kanye West: now I ain’t sayin’ she a gold digger). Her infatuation and grief blind her to the reality that her life is poised to change significantly. While Elizabeth’s reaction is bad, Duncan’s is worse. The bigger they are, the harder they fall, and Duncan is King Kong clinging to the top of the Empire State Building. He was told throughout his life that, with his pedigree, he was poised to live among the social and business elite. Needless to say, Duncan’s discovery that his path may not be quite so easy leads to a spectacularly violent reaction.

While the structural backbone of the plot is fairly straightforward, one looming problem with White’s play is that it tries to do too much. The play touches on the horrors of war, bigotry, loss, drug abuse, generational divides, community building, and American-dream building. The trouble is that all of these themes, although worthwhile to explore, are flung about as if they add up to a plot. Perhaps that is why I left the theatre feeling like I should have a lot to contemplate, and yet, like there was very little about the play that warranted contemplation.

One of the big draws for me to see Snow Geese was the casting. News flash: it is a great year to be a former West Wing cast member if you are looking for a gig on Broadway. I was a political science major and a politics junkie in college, and The West Wing was basically five years* of entertainment crack cocaine. There are three West Wing alums on Broadway at the moment**, including Mary-Louise Parker. Hardly a Broadway novice, I had high hopes for Parker’s performance. Unfortunately I left the theatre disappointed and a bit perplexed. Elizabeth is a flawed and grieving woman, but Parker’s portrayal was confused. At times her sadness seemed forced and her distraught behavior contrived. Moreover, she lacked any motherly connection with her on-stage sons and looked far too young to have raised them. While Parker excels at portraying strong and self-reliant woman (one of the reasons I enjoy her as an actress), she really struggled with Elizabeth.

Cross and Jonigkeit similarly failed to develop compelling and believable characters during the first half of the play, although they found their stride in the second half. There was a particularly well-choreographed and brilliantly physical fight between the on-stage brothers that I am sure leaves them both bruised and battered on a nightly basis.

Thank Jebus for Danny Burstein and Victoria Clark. Burstein and Clark really shine in this production. Burstein’s Max is charming and sturdy, yet he struggles with self-doubt and a crisis of identity. Clark has crafted a character that is funny, reliable, and strong-willed – the linchpin in the family who keeps everything rolling along.  These two stage veterans never disappoint.

The set and costume designers also did an admirable job. Jane Greenwood’s period costumes were beautiful (especially when viewed from my second row seat), and I genuinely enjoyed John Lee Beatty’s set design, which facilitated beautiful transitions between scenes and landscapes.

As I learned from this play, some geese survive hunting season and fly off with a second chance at life. Others are casualties of the hunt. Unfortunately, Snow Geese is a casualty of too many plot and acting missteps and may not have long to live on Broadway.

*The West Wing actually aired for seven years, but I refuse to count the last two.

**For anyone planning a West Wing pilgrimage, the other two are The Winslow Boy with Roger Rees (how could you forget the charming, clever and eccentric UK ambassador Lord John Marbury?) and After Midnight featuring Dulé Hill.