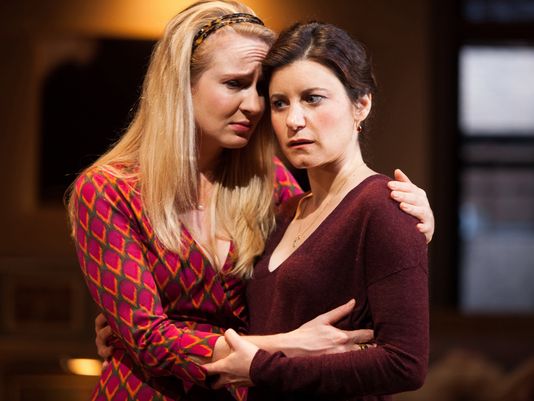 Women or Nothing: Nothing to Get Excited About

It is difficult to graduate with a college degree without drinking at least one White Russian at a The Big Lebowski viewing party. My college experience was no exception, and I have developed an appreciation for Ethan Coen’s sharp use of language, his dark comedic style and his eccentric characters through many viewings of his work, including The Big Lebowski, Fargo and O Brother Where Art Thou.

For a story-teller who excels at keeping audiences slightly off-balance with his eccentric characters, Mr. Coen’s foray into full-length theatre comes across as predictable and contrived, and, with one notable exception, the characters are not particularly memorable.

The Linda Gross Theatre is a charming space located in a renovated church in Chelsea; however the set, with the exception of a very large and overtly sexualized painting that serves as a running sight gag, was cluttered with undefinable knick-knacks that seem out of place in the home of our lesbian couple, Gretchen (Halley Feiffer) and Laura (Susan Pourfar).  Laura’s grand piano looms over the stage, where it sits untouched for the entire performance, perhaps to emphasize Laura’s disenchantment with her career as a renowned concert pianist.

The plot is simple – Gretchen and Laura want to have a baby, and Gretchen has concocted a plan whereby Laura will woo and sleep with an unsuspecting young, language-fumbling litigator named Chuck in order to get pregnant. Why, you may ask, doesn’t the couple use IVF, especially given Laura’s understandable hesitation to sleep with a man? Gretchen explains to Laura that only perverts jack-off into a test tube under florescent lights. Case closed. And so begins two acts, set over a period of 24 hours, during which Laura and Chuck grapple with what it means to be human and what defines each of us, both with respect to our internal self and with respect to the person that the world sees.

One sizable plot problem is the relationship between Gretchen and Laura. Namely, there does not appear to be much of one, although it is implied that the couple has been together for sometime. Given their first discussion of Gretchen’s plan, you would think that they just started talking about having a baby a few days ago. Gretchen all but strong-arms Laura into going forward with her plan and dismisses both Laura’s defense of Chuck’s humanity (he should choose to have a child!) and the possibility that something might go wrong with this crazy scheme (note: it does) by characterizing Chuck as a penis with solid genes that she has looked in the eyes. You see, Gretchen vetted Chuck by meeting his daughter and ensuring that he begot smart and beautiful genes (or at least not a mini serial killer).

Apparently, despite being a lawyer, Gretchen is incapable of envisioning a scenario where Chuck finds out that he unwittingly fathered a child and wants to a play a role in his child’s life or where asking Chuck to father a child might be a better alternative. Gretchen gets frustrated with Laura’s talk of the essence of personhood and humanity, and therein lies the absurdity – having a child is entirely about personhood and humanity.

The chemistry between Feiffer and Pourfar is nearly non-existent; however the writing does not give them much to work with. Pourfar’s Laura is neurotic, condescending, and utterly insecure with who she has become personally and professionally. Pourfar does a nice job of tackling these character flaws without allowing Laura to become completely insufferable. Robert Beitzel performs admirably as “nice-guy” Chuck, although the character lacks depth and comes across as a character created for Laura to talk at, rather than interact with. Pourfar and Beitzel do their best with a particularly convoluted “wooing” scene during which Laura asks Chuck a series of questions about changing oneself. Unfortunately, as the characters lose focus on what questions were asked and answered, so too does the audience.

The shining moment of the production, along with the predictable plot twist, comes with the arrival of Laura’s mother Dorene (played by Deborah Rush) the morning after Laura and Chuck sleep together. A haughty, well-dressed at 8:00 am, matriarch who has apparently slept with everyone she ever employed (plus Jack Kerouac), Dorene spars with Laura about human interaction as only a mother and daughter can, and she shares the one poignant moment of the play with Chuck when he reveals his insecurities about, naturally, his genes. Rush has impeccable comedic timing and has developed a character that is equal parts charming and feisty.

Strangely enough, it is easy to forget that a baby is the couple’s goal as the play unfolds, and, in the end, I did not care enough to consider the ramifications of Laura and Chuck’s night together. Although there were a few laughs in the show and a few thoughtful moments, ultimately, this was a disappointing full-length outing for Coen and for me.