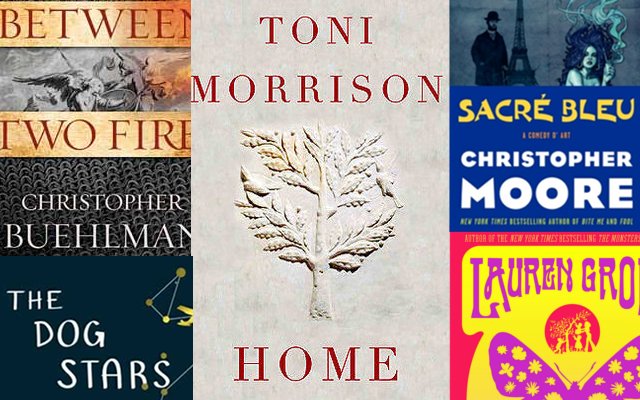 This is pretty much straightforward. I read a lot of books this year, and a huge proportion of those books were fiction. Sometimes realistic, some fantasy, some sci-fi, and some historical—but, in any case, a lot of fiction. These are—in no true order—my top five fiction picks of the year.

The Dog Stars, by Peter Heller
If you’ve read my review, you know I LOVED this book. It’s about survival in a post apocalyptic world, loneliness, grief, love, and it is so stunningly well-written that I could scream (but I’ll refrain. That would be both alarming and pointless in this forum). Hig, a former contractor, works to survive in a barren world. The writing is sparse—clean—fragmented—like tiny bullets, or the sentiments of a telegraph, but inescapably self-reproaching, post-modern, and honest. You can hear Hig’s thoughts echoing in his head as he criticizes himself for thinking certain things, censors himself, and shames himself—even now that no one is looking. And you can feel the silences, the spaces between the words being contorted and colored by the sentiments surrounding them—conscious connotation. For the quality of the writing alone The Dog Stars was my favorite book of 2012. The fact that the story moved me to tears, laughter, confusion, and empathy too just pushed it over the top. Go read this book.

Arcadia, by Lauren Groff
This is a great book. It’s fun, a little kooky, a little sad, and very beautiful. The story is the story of Bit (short for “Little Bit of a Hippie”)—the first child of the hippie commune, Arcadia. The book—and Bit—are wonderfully unashamed of poetry, of sentimentality, and calling beauty by its proper name. Arcadia tracks Bit’s life as he grows up—first in the commune, then, when things fall apart, outside of it. As in all life stories, there are mishaps, misunderstandings, triumphs, losses, growing pains, and unexpected discoveries. Neither Bit nor Groff flinches from examining the failed hopes and broken faith that come with the dissolution of the commune, and while recognizing the realities of the mundane world, the potential for grit, neither gives in to it. Both retain a restrainedly hopeful view and expression of beauty as vital and genuine in the world—without wading into sap. You can always read my full review, but the takeaway is this: Groff writes a very beautiful story with lovely characters and words that are neither artificial nor naïve. It’s both refreshing and moving—and that’s rare.

Home, by Toni Morrison
There is a reason why Morrison is highly regarded, lauded, praised, and taught in schools. The reason is that she’s a marvelously balanced, craft-oriented writer. Home is a short tale—you can read it in a day—but it feels vast, has a hint of odyssey about it, and it will grow on you with re-reading. It’s a relatively simple story told masterfully. Oh yeah, I have a whole real review. You should read that, too. Done? Good. Thanks. Anyway, Home is probably the most Most Well-Crafted Book I read in 2012. Morrison’s judicious usage of ambiguity, verb, and phrase traditionally belong to poetry more than prose, but her exactness does nothing more and nothing less than illuminate.

Sacre Bleu, by Christopher Moore
Given some of the other books on this list (oh, all right, mostly the Morrison), this may feel a bit out of place—you know, because it’s a comedy (an uproariously funny comedy) and about oddball artistes and blue girls of dubious reality. But let me assure you, this is precisely where this book belongs. It was genuinely one of my favorite books from 2012, and certainly my absolute favorite of Moore’s canon by orders of magnitude. There’s a review for this book too. And this book is, yes, unabashedly more pure FUN than the others on this list—I tend towards melancholy whatnots (that’s just part of who I am) but I do actually like fun things. And this is a smartsmartsmart fun thing (my favorite). It is a total romp—it’s funny, it plays with genre lines, it throws everything but the kitchen sink at you, and all the while floats contentedly on its witty back, pulling you along for the ride. Read this book, you’ll have good time. If not, you probably don’t have a soul.

Between Two Fires, by Christopher Buehlman
Okay. So, this one was a late entry. As in, I finished it after New Years. But it is so good. Set during the time of the bubonic plague, crusades, and an almost apocalypse, Between Two Fires is a reimagining of (then) inexplicable disasters as a literalization of the war in heaven and tells the story of the excommunicated knight-turned-brigand, Thomas, and Delphine—a young lady who speaks to angels (and also, as it turns out, is Jesus. No, seriously)—who get swept up in it. It should go without saying that this book is not really meant for purists. It should also be pretty clear by this point that I have a thing for apocalypses… and knights… and disease… and also little girls who talk to God. So this book is, admittedly, specific to my tastes, but it is also undeniably wonderful. Buehlman does a fantastic job of crafting the story—giving us characters to sink our teeth into, conflicted circumstances, and expressive, contemporary, conversational writing. Despite the unornamented, almost gritty writing style, Between Two Fires alludes to classic medieval texts, like Gawain and the Green Knight, through echoed and borrowed tones, and the juxtapostion—mirroring the divide between the earthly chapters and faux biblical snippets of the book—smiths something new and arresting. And somehow, Between Two Fires manages to be simultaneously action-packed exciting, intellectually enthralling, and emotionally stirring. You should understand: this was definitely one of my absolute favorite books of 2012, but it is (in some ways, anyway) a bit of a selfish addition to this list. Most people are not quite as entranced with the idea of girls who are Jesus as I am (never mind the whole plague thing). I get that. But if you think there’s even a passing chance that you’ll be interested, you should read this book.