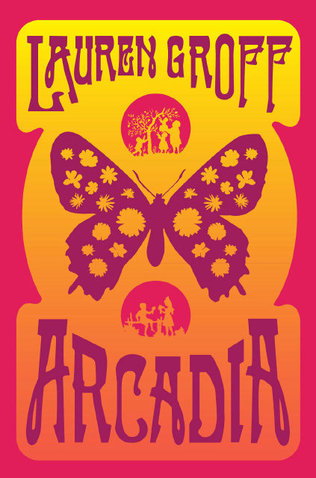 Arcadia is Lauren Groff’s second novel and it’s wonderful. I read Groff’s first novel, The Monster’s of Templeton, years ago, and I liked it quite a bit. But I love Arcadia more.

The book’s about Bit—the first-born child of a hippie commune called Arcadia—and his life (in Arcadia and Outside, as a child and an adult, struggling through love and all the other life/emotion junk).

Arcadia is beautiful. It’s fragmented like a box of old photos and stuffed with the details of memories and the warm, sweetly sad feeling of nostalgia. And the book can get a bit soppy and sweepingly Romantic (there’s a little bit of the smoochies romance stuff, but I mostly mean the literary concept with emotionally dramatic landscapes and the ultimate valuing of the soul and FEELINGS above all else and all that jazz), but more than anything, what the book really is, is unabashedly poetic—just like Bit and the idea of Arcadia itself.

Also, when I say that this book is emotional, I’m serious. But perhaps what I really should have said was “moving.” This book alternately gave me warm fuzzies, made me feel that reaching feeling where you want to cradle a fictional character through the pages and give them soup so that they know that they’re not alone (just me? Okay then. Whoops. #overshare), carved out sacred hollows for little pieces of souls (mine and the characters’), and made me cry (don’t be alarmed. It’s actually pretty easy to make me cry. Show me a pair of star/time/dimension crossed lovers and/or noble Romans and/or RUE and I’m sobbing. Not that this book has any of those, but you know what I mean. I cry. Often).

And admittedly, I have a fondness for hippies, and dreamers, and poets, and all that nonsense (Joss Stone. I love her. And I was a vegetarian for 11 years, blah blah blah). So maybe I like this book better than the average bear because I can just roll with the idea of a book set in a hippie commune and not feel uber alienated—but I think that Groff does a great job with writing real, interesting characters, and the tensions that arise out of their interactions. Even in their attempts at a utopian commune. Read: This is not a propaganda piece about why hippie communes are the best (although, noodle dancing is pretty great). And Groff is for real paying homage to the idea of death even in Arcadia. The novel is an individual’s examination of his memories about the place where he grew up, and how his sense of home and safety dissolved, reasserted itself, faded, and ultimately metamorphosed.

While I get that some people will look at the blurb and see the hippie and the commune and think, “this book is not for me,” (and I utterly respect that. Know yourself) I think that having actually started reading the book, only people with an utter phobia of hippies would put it down just on the basis of the commune thing.

If you think prosety (poetic prose) is pretentious and high-falutin’, then you might put the book down for that, but that’s a different issue.

I know that usually I’m quite long-winded (and that this isn’t exactly the shortest review that e’er was writ), but today I’ll just leave it at this: this book is a swift, wonderful, moving, sensory experience and you should really read it.