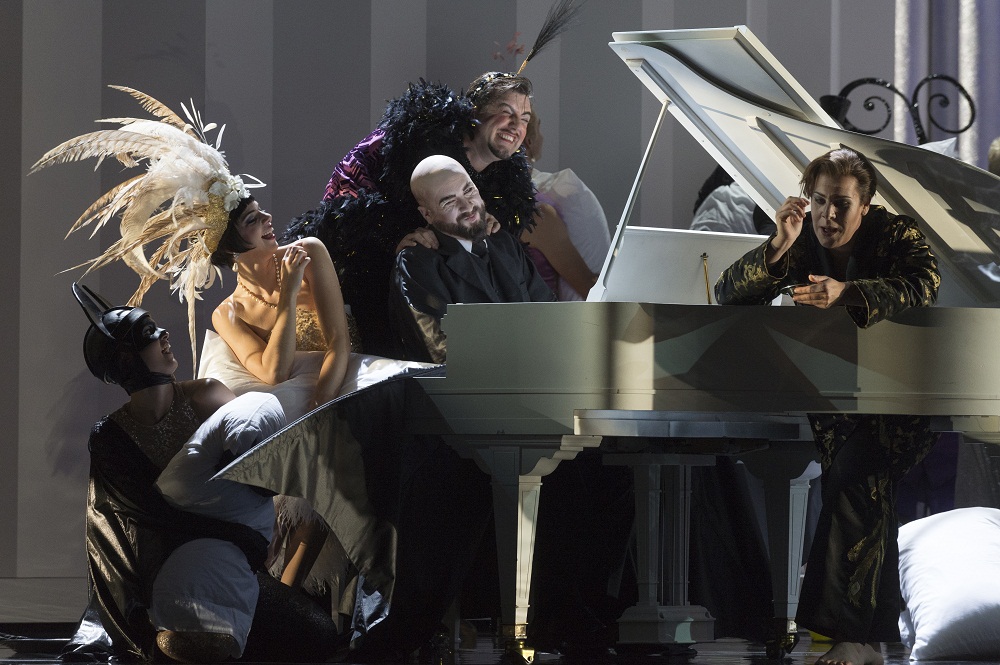 The COC This Fall

The Canadian Opera Company had an interesting fall with two repertory productions that had little in common beyond being of about the same quality. Both Il Trovatore and Die Fledermaus had the stunning design work and professional overall calibre that is to be expected from the COC, but they were both about average when it came down to it. But for opposite reasons.

There was nothing specifically wrong with Il Trovatore, just that it shouldn’t have been programmed into this season at all. I liked the contrast of the traditional Verdi classic opposite the wacky strangeness of Die Fledermaus, but, story-wise, it’s almost identical to Tosca, which the COC did to greater effect mere months ago. The COC’s magnificient Chorus was as superb as always, and star baritone Russell Braun perhaps the best I’ve seen him as Conte di Luna. I was also quite impressed with mezzo Elena Manistana’s Azucena when she was at her best and newcomer Ramon Vargas was excellent as romantic tenor Manrico, though I wasn’t altogether taken with Elza van den Heever’s passionless Leonora. Director Charles Roubaud didn’t bring much to the proceedings though my principal complaint would be the incredible staleness of his romantic scenes. Verdi’s score is obviously beautiful, though strange in using a baritone for the villain as opposed to a bass- the result was a less vocally dynamic performance than the COC usually delivers and the poor old woman beside me never quite did figure out which man was which. I’d complain about Salvatore Cammarano’s frustratingly uninspired libretto but that seems futile. Il Trovatore as a whole was the sort of opera one might go to if they were looking for something as adherent to convention as possible. If you were trying to explain to someone what opera was, the COC’s production of Il Trovatore, in all its fully functional, highly competent, unoriginal splendor, would be the perfect thing to attend.

On the complete other end of the spectrum is the craziness that was Die Fledermaus. Allen Moyer’s giant clock and staircase set would have been scene-stealers if they’d been used with something boring like Il Trovatore. But, despite it not being sung (or written, for that matter) particularly better, Die Fledermaus wasn’t even close to boring. What it was was nuts. It wasn’t senselessly nuts like Love from Afar, it was kind of amusing in its nuttiness, and the conspiratorial figure of Dr. Falke intriguing enough to make the whole thing come together well. Enigmatic and sung (and equally if not even more importantly, played) by Peter Barrett, the whole thing would have been better served by there generally being more Falke. The supporting characters who really serve as the main characters are far less interesting and the highly competent assembly of performers in the roles left plenty to be desired in terms of performance beyond vocal competence (when I say competence, I mean they are extraordinary opera singers worthy of their place with a renowned company like the COC, I’m just incredibly tired of how one-note the company can be performance-wise). There’s not a lot to say about Die Fledermaus’ story without giving away the whole point of the story but suffice it to say, despite some incoherence, I was thrilled to have something different happening on stage beyond girl falls for troubadour, count threatens to kill troubadour, girl kills herself.

The COC’s fall was fine, it was acceptable, it was good. But here’s why I almost never call a COC show great and why last season’s Iphigenia in Tauris was a rare exception- it was well acted and I cared about the performers! That’s it. Over the course of that one performance I invested in the singers, particularly those who really put their hearts into the roles and not just into the notes. The best among them was Joseph Kaiser who remains my favourite opera performer even though I’ve only seen him once. Because I almost never see anyone more than once. My favourite thing about The National Ballet of Canada is the strong company they’ve established and the personalities and performance history each principal brings with them from role to role. We know them, we care about them, so when Jillian Vanstone finally made her principal debut after years as a first soloist the performance meant a little more. It informed Onegin to see Guillaume Cote chosen for the romantic supporting role of Lensky and it was interesting to watch McGee Maddox go from out-of-place Romeo to perfectly cast Laertes. The personalities of the company make a difference, make All the difference for me, in my enjoyment of the performances. The COC doesn’t have that. They have a few repeat performers (they love Braun so he shows up a couple times a year) but the singers are mostly guest artists instead of COC regulars and therefore Toronto treasures the way the dancers are. I think the COC would benefit greatly from developing a company of players for whom the audience can root from role to role. Maybe some of the developing stars out of the Ensemble Studio can be that for the next generation- some of the aforementioned breakouts like Barrett certainly deserve to be.