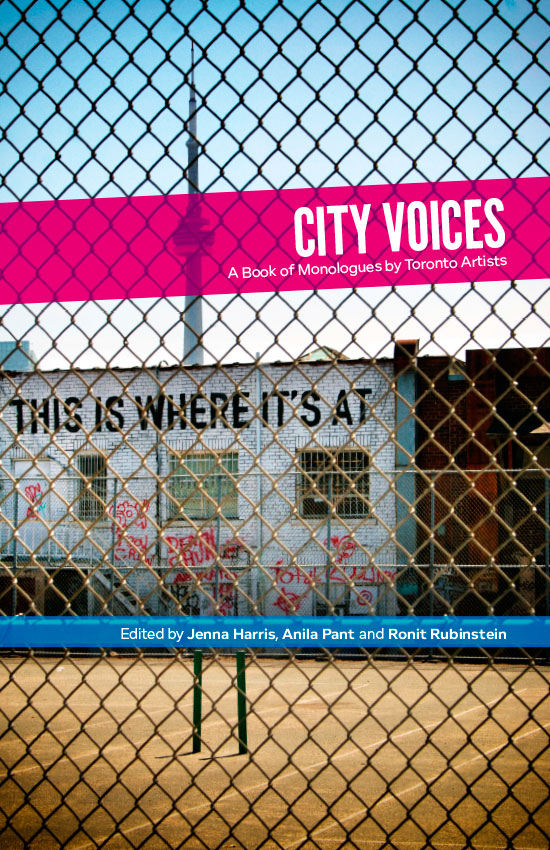 As we approach the December 19th launch of a new artistic initiative in Toronto, we thought we’d give you a quick preview of why we think it’s important and how some of the artists we love have gotten involved.

City Voices– launching this Wednesday at Buddies in Bad Times Theatre- is a collection of this city’s emerging theatrical voices (as well as some poetry and prose), brought together by editors Jenna Harris, Anila Pant and Ronit Rubinstein in a single book of monologues. Toronto produces hundreds of new theatrical works a year, some of which are truly special and deserve to be available for fans who want to read them any time instead of being forced to beg for a remount, so City Voices gives up-and-coming writers an opportunity to publish work that might not otherwise have made it to print for many years, if at all.

We talked to one of the book’s creators, Jenna Harris, about where the idea came from and why it’s important:

“City Voices: A Book of Monologues by Toronto Artists began about a year ago when I found myself a little frustrated over trying to find ways to get my work as an emerging writer out there and into the public sphere.  Taking a look around me at the network of artists that I had built up in the 5 years since moving to Toronto, I realized that I was not the only one feeling this way. Therefore, I wanted to create a project that would showcase the work of many writers, and celebrate the fierce talent this city has to offer.

City Voices, at its core, is a book that is of this community for this community; it is artists coming together to create a means by which to connect and share their unique, diverse and dynamic voices with the city they call home.”

Harris, Pant and Rubinstein hand-picked 28 writers from an open call for inclusion in City Voices, at least two of whom will be familiar to My Theatre readers. Kat Sandler, whose new play Delicacy we just reviewed, is one of the book’s most prominent “gets” seeing as her submission won the 2012 Fringe New Play Contest and became one of the most talked-about productions of the year. We asked her to tell us a bit more about her piece:

“Help Yourself, co-created by Daniel Pagett, was the 2012 Toronto Fringe New Play Contest Winner, and went on to play to sold-out crowds and win Patron’s Pick and Best of Fringe (following in the footsteps of Kim’s Convenience). The idea for the piece -about a man who helps people commit immoral acts by clearing their consciences- came out of a discussion of what a modern- day demon or ‘shoulder devil’ might look like, and our society’s reliance on therapy and logic to downplay guilt.”

The other City Voices writer we asked to preview her work is a long-standing favourite of ours- My Theatre Award nominee and two-time Performer of the Year Jessica Moss. An established performer still getting her feet wet as a playwright, Moss has two different pieces featured in the book; we’re just sad that neither is an excerpt from her hilarious and heartfelt one-woman show Modern Love. Here’s what she said about what she did include:

“I’m really honoured and excited to be a part of City Voices. As someone who is just starting out as a writer and actor and really struggling to find a place in the Toronto scene, it feels like a huge gift. It’s also really exciting that so many people are writing and have so much to say.

Next to Him is the working title of a full-length play I’m currently writing. It examines the relationships between three people: Ash and Peter, tenth grade students at a private boys’ school in Toronto, and Eva, Ash’s mother. Peter needs help: anyone can see that. He’s aggressive, manipulative, angry; but he’s also a talented actor, funny…special. Both Ash and Eva are drawn to help him in different ways, against their better judgment: Eva secretly becomes Peter’s therapist, while Ash does a different, much more sinister kind of therapy with him in the school locker room. The monologue is Peter talking about his feelings for Eva. It’s from the first draft of the play, which was recently shortlisted for the RBC Tarragon Emerging Playwright’s Competition. I’m working on the next draft right now, so I’m really deep in the weeds with it, pacing around my house clutching at lines and whiskey bottles. I wrote myself into this mess, now I need to write myself out.

Bahrain is a stand-alone speech right now. I wrote it as an exercise in a writing workshop with Judith Thompson, where we were told to write something based on or inspired by a newspaper. I read about young men in Bahrain who carried flowers as they went to protest the government, and I thought about how they would have come by the flowers. I also thought about the stillness and silence that surrounds a place after a catastrophe…we’re kind of seeing it now with reports back from Connecticut and the elementary school tragedy: I can imagine the terrifying sounds that must have gone on, and I feel they puncture and reverberate even louder in the silence that follows, when no one has any words or any sounds. I wanted to write something that started in quiet and stillness and swelled and moved into exultation, or chaos, even if that was just internal to the character.”

Join Jenna, Kat, Jess and everyone else involved in the making of City Voices for the book launch at Buddies in Bad Times Theatre on Wednesday, December 19th. The reception will start at 7pm with readings at 8pm.

And be sure to check out www.cityvoices.ca for more information.