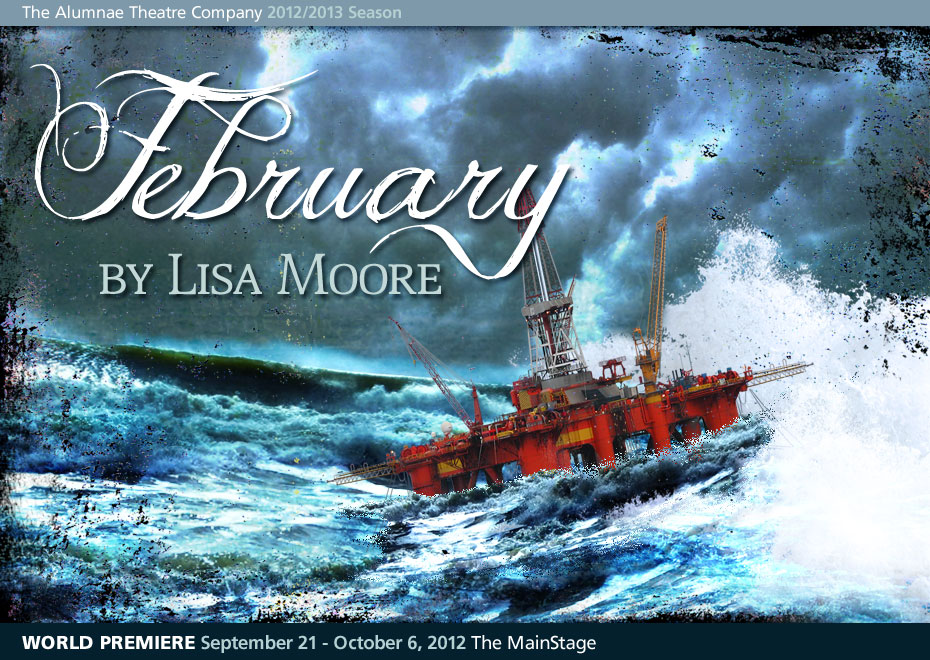 To Let Go or Not to Let Go: February

Equal parts tragedy and comedy with a tinge of history, Alumnae Theatre’s season opener is a real visual treat.  Audience members are aptly greeted by a tall pyramid structure positioned centre stage which I – for better or worse – immediately deemed the “tower of Babylon.”  Contained within are many of the props which actors make use of throughout the show.  Set and Props Designer Karen McMichael has done a great job at capturing the subtle differences of a decade not too far behind our own.  The play is an adaptation of Lisa Moore’s own novel of the same name centering on the sinking of Ocean Ranger, an offshore drilling unit east of Newfoundland, in 1982 which killed 84 people.  I’ve always been a fan of theatre which visibly reveals aspects of process.  As the actors discard a prop, it is placed downstage in a neat row.  Quick changes are completely visible and aided by stagehands “in character.”  And the tops of the wonderfully versatile platforms on stage left and right can be entirely propped up to act as a backdrop for several scenes.

Unfortunately, the full potential of some of these mechanisms was not always realized.  I anticipated the tower to act as a metaphor representing the journey towards letting go, one step at a time, of the grief which prevents Helen (Lavetta Griffin) and her family from moving forward after her husband is killed offshore.  I expected to see more dynamic evidence of a tower left bare, stripped of its artifacts, and dramatically lit at the end of the piece.  But there were still props on it.  Perhaps, this signifies one of the messages of this show that we can never – and should not have to – fully let go even as we move on with our lives after a traumatic incident.  But while I have always defended the notion that in Western culture we are expected to move on too quickly after tragedy, nullifying the grieving process, the idea seems like it might be a little too vague from a design prospective.  I, also, got lost wondering what the scenic paint was intended to signify overall, especially since the backdrops accompanied scenes very diverse in nature.  And the performers often handled their props or costumes without intention, waiting for the lights to come up before “entering” into character while, on the contrary, moving too quickly into transitions.  None the less, this does improve throughout the show and when they are “on” the cast members deliver strong performances.  Let’s leave it to a matter of opening night nerves.

It does not go unnoticed that this story, dealing with the complexities of grief, has its roots in prose.  It makes for a very interesting narratological structure on stage.  Continual flashbacks are most common in novels and films.  They reveal to us a story whose events unfold in a very different order than their presentation, that is the time and speed of the “story” does not match that of the “discourse.”  This works rather effectively in theatre, although flashbacks on stage tend to signal a shift into a sort of dream world – another layer of reality.  The constant shifts in time did not bother me, here, but, once again, would have been aided by stronger and stylized transitions to complement the richness of the text.

The tremendous potential of this show is revealed in its ability to communicate a wide range of human emotions.  And it manages to articulate most beautifully the fragility of what it means to acknowledge the past while trudging forward in order to avoid letting life pass us by.  Some of the most beautiful scenes and images reveal the above.  In one such moment, Helen, shortly after loosing her husband, frustratingly tries to beat eggs as she prepares breakfast and tends to all the kids.  A characterized stagehand rises to the top of the tower to jet flour onto poor Helen as her beating escalates culminating in an explosive meltdown.  In another scene, further on in time, Helen still grapples desperately with the past revealing to her sister Louise (Kathleen Jackson Allamby) that she feels as if she has been living life on the outside, watching in, as if it was a piece of theatre that you could just watch – “tapping on the glass.”  I enjoyed this commemoration to an early twentieth century notion of “theatre within theatre” which marked the deliberate breaking of the fourth wall.  Not surprisingly, the reference remains literary as the staging does not allow for Helen to transcend the confines of her stage.  In one of the more light-hearted scenes of the play, Helen waits for a date in a bar.  She has decided to, finally, give online dating a chance, and together with the young waitress (Victoria Fuller) cracks up hilarious jokes about age, love, and men.  But as she gradually begins to sulk revealing how she half-heartedly took this risk and realizing that the guy is not going to show up, a most endearing waitress comforts her and assures her she is much more beautiful than she lets herself believe.  I found this to be a very encouraging moment as I would have half expected such a young lady to mock Helen, especially when the latter, in her cooler-induced stupor mind you, awkwardly jokes about asking her date to “act like her dead husband.”  Lastly, I must mention the stunningly captivating monologue delivered by Cal (John Fray), Helen’s late husband, which left the audience in pure silence.  Appearing as a “ghost” character at this point in time, he enters into dialogue with Helen who, clearly, has held onto the fact she could never gain full closure from this tragedy – not knowing how Cal would have ultimately died or what his last words would have been.  He gives her the reassurance she yearned for all along: “Death would like to be introduced.  It’s willing to be polite.”  In other words, there would have been little time to suffer.

All in all, this show delivered a commendable adaptation of Lisa Moore’s novel.  It is clear that a lot of work went into this project, and many fans of the writer in attendance agreed the staging captured the essence of the book.  By ironing out a few of its wrinkles, this show is sure to become a hit.

February plays at the Alumnae Theatre Mainstage to October 6.