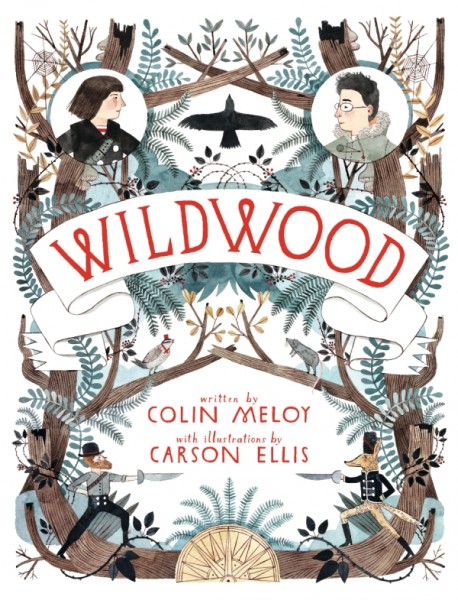 Wildwood is a children’s book written by Colin Meloy and illustrated by Carson Ellis. Let’s get down to business (to defeat the Huns. Duh): I adore this book. It’s fun, engaging, whimsical, action-packed, imaginative, well-written, and (perhaps best of all) it’s a children’s book that uses big, beautiful words and deftly grapples with complicated and often dark subjects without ever talking down to its reader. I can already tell that I’m going to be evangelical about this one and recommend it to every passing man, woman, and child.

The basic plot of Wildwood is that 12-year-old Prue McKeel of Portland, Oregon, is sitting in the park one day, minding her baby brother, Mac, when he is stolen by a murder of crows and spirited away into the mysterious Impassable Wilderness on the edge of town. In her quest to find and save her brother, Prue and her classmate, Curtis, enter the Impassable Wilderness and find themselves embroiled in the complicated politics of The Wood (as the natives call it), magic, and a brewing war.

First things first: The language. Meloy uses beautiful language that will challenge and delight a young reader. The word choice is rich, varied, playful, and assumes that the reader is smart and will not only keep up, but will devour the language. This is my favorite approach to children’s writing, because as a child—and even now, as a big person—there was almost nothing that I found more infuriating/frustrating than the feeling that someone was talking down to me or underestimating my intelligence (besides, you know, big actual injustices and stuff). Anyway, rant over. The verbal world of The IW is great–songs and lore, dialects, etc. all come into play to make the Impassable Wilderness/the Wood feel like a full, fleshed-out world with lots of different factions and a long history.

I’ve gushed a lot about Meloy’s words, but let’s not ignore Ellis—Wildwood’s also visually stunning. It’s gorgeously illustrated, with simple, energetic, and cleanly beautiful line drawings threaded throughout the text, sometimes appearing on their own distinct pages, but often weaving their way in and out of the paragraphs on the bottoms and corners of pages. Maybe you forgot about how much I love non-conventional paneling/illustrating, but just to remind you, it’s a lot.

The plot of Wildwood is mostly predictable (drawing on fable and fairytale tradition like it do) but one of the best things that keeps Wildwood interesting is the realism that Meloy infuses into the moral dilemmas and consequences of the plot. After all, there are kids dealing with war, death, separation issues, political problem solving, and all sorts of other stuff. Meloy does the unthinkable and even makes dealing with their parents a believable aspect of the story (Have you noticed that a lot of the protagonists in kid’s/teen’s books are orphans? Do you know why that is? I promise you, it’s mostly because parents are a pain in the butt to plot around). I mean, it’s still a kid’s book, so Meloy never crushes you with the emotional ramifications. He walks the line expertly. Nobody develops PTSD or has ‘Nam flashbacks, or anything, but every action has weight and consequence (both for the plot and the character development). It’s a move that makes the book feel honest, immediate, and–despite its fantastical, magical, fable-like qualities–real in a way that most children’s books (and many adult books) can’t manage.

So now you know that I love the illustrations, the delicious words, and the grappling with potentially tough concepts—but all of that would mean zip if I didn’t like the characters. Thankfully, that’s a total non-issue since I really really really like the characters. Prue McKeel, at 12 years old, is stunningly smart, sensible, and mature. She’s got a bit of a sarcastic streak, but when have I ever done anything but love a snarky girl (especially one who goes on an epic quest to save her younger sibling)? Sometimes while reading, I caught myself thinking, “Maybe she’s too mature for a 12 year-old?” but then I remembered how I was at that age (and most importantly, how I thought of myself at that age) and mentally went, “whoops. Nope. Nevermind. Meloy’s got this.” But as mature and focused, and serious as Prue is, Curtis is her opposite. He’s funny, silly, eager to be caught up in an adventure, and hilariously genuine. When he gets a sword, his first instinct is to swashbuckle in his mirror. I appreciate that kind of honesty. The other minor characters are equally lovable and well drawn. Richard (a warm, but slightly crotchety old postman) might be my favorite. Even our prime villainess—The Dowager Governess, Alexandra—is clearly and deliberately motivated by more than just the desire for world domination (ultimate power, etc etc). She’s not a perfect example of ambiguous morality or anything, but she’s still pretty great.

Honestly, my only tiny nitpicky issue is that it’s a little slow to get started. It took maybe 20-30 pages more than I wanted for it to really grab me. But once you’re in the woods, it’s pretty much off to the races. Once you’ve hit the uniformed coyote soldier’s scuffling, you’re golden (this is a real thing that happens in the book AND I LOVE IT!!!).

And because of the writing style (with it’s grounded characters and lovely lovely prose) I think it’s got great Teen/Adult Appeal as well. I mean, it’s not The Hunger Games (the topics and circumstances dealt with are less universally oppressive, there isn’t a love story, you will cry less*) or Harry Potter (there’s only one book. …so far. Hopefully we’ll go back into The Wood, but as of right now, we get one big adventure in which to see Prue and Curtis grow. No dealing with teenage angst, but also, you know, a less epic overall arc)–so it won’t grip everyone you’ve ever met from ages 9-99, is what I’m saying. But man, it’s great, and I’m firmly convinced that older readers with an open mind and a fondness for YA/Juvenile fiction will love it (basically, as long as they’re okay with no romance, they should like it). Personally, I started reading it simply because I was hoping it would be a book that I could recommend to kids when asked. I get asked about books for young readers A LOT. It’s a personality hazard. Don’t get me wrong, I LOVE being able to recommend good books to kids and see them get excited and find their kindred spirits in characters and authors and stuff***, but sometimes I start books that I wouldn’t normally pick up because I’m thinking of the children. Anyway, the long and the short of that all was that I picked up Wildwood primarily so that I might have (I hoped), another book to recommend to eager young readers (best population subsection ever), and I ended up thoroughly falling in love with it myself, and now I need a copy for keeps.

So if you know any smart fourth-through-sixth graders who need something great to read—or older kids/not-admitting-that-they’re-no-longer-kids people, who want something lush, smart, beautiful, sweet, and ultimately comforting to read—you need to direct them to this book.

Why are you still here?

*Although there are definitely one or two gorgeous moments that will blow your mind/could definitely jerk some tears if you were feeling a little fragile that day. One of mine honest-to-god has to do with an old magical hippie (basically) telling Prue the way the world is. It’s modern language, but the concept has the huge, sweeping, crashing wave sentiment of “Tomorrow and tomorrow” and other big Shakespearean musing-about-the-tragedy-of-the-human-condition speeches. That passage may or may not totally be scribbled all over several notebook covers now.**

Some people may also care that the book was written by the lyricist for The Decemberists, and illustrated by his wife (adorable). I didn’t know that until I finished the book, which I’m glad about, because I might have gone in with weird expectations. But no worries, boy can WRITE.