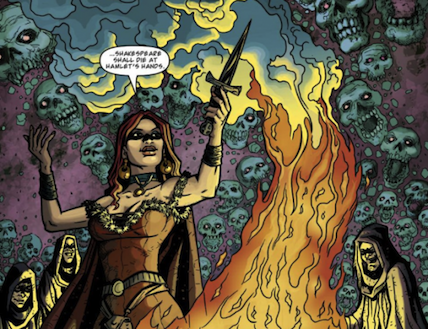 Kill Shakespeare is a graphic novel created and written by Conor McCreery and Anthony Del Col, with art by Andy Belanger, about a wizard/god (it depends on who you ask) named William Shakespeare and the characters that are out to kill/save him. Our heroes and villains are Hamlet, Juliet, Othello, Iago, Falstaff, Richard III, The Macbeths, and the witches, as well as plenty of minor characters (Ratcliff? really?!)—all of whom have been significantly re-interpreted as the leaders of two warring factions of the kill vs. save variety.

Before we really get going here, there are some important things that you should know:

Thing One: I am a crazy Shakespeare nerd. I’ve only NOT read three of the plays. And I quote Bill (yes, I call him Bill). Often. But I’m not a purist about it. Translation: I don’t care whether or not my actors are wearing neck ruffs and poofy shorts (I usually prefer that they don’t do this, actually, for the sake of MY EYES) so long as they’re telling the stories well. But just…you know, keep that in mind going in, okay?

Thing Two: I am also a big fan of comic books. I don’t tend to read them as regularly as other books, but I have opinions on specific superheroes, and DC vs. Marvel turf wars, and I really like literary graphic novels. It’s a genre I enjoy and gravitate towards (although, let’s not lie, with comics in general I have some genre-cliché issues).

Basically what I’m saying is: In theory, Kill Shakespeare should be a flat-out hit with me. It’s a weird crossover niche that should be just exactly my thing.

In reality, I have a lot more mixed feelings about it.

The art is well done. Not life-changing, but I like their dramatic use of color and I really enjoyed the paneling. My feeling about comics is that it’s a medium in which you have a lot of tools available to you for telling the story, and that your reader is already stopping to read the words and the art, and fill in the gaps between panels, so you might as well take advantage of that and make the paneling dynamic and indicative of the world or action you’re conveying. Belanger et al. did a great job making the paneling work—specifically taking advantage of two page layouts and non-traditional panel delineation.

Kill Shakespeare is also bursting at the seams with Easter Eggs, which are some of my favorite parts. All of the minor characters are named after minor characters from the plays, the taverns are appropriately and hilariously named, and the ship that Hamlet sails out of Denmark on is called The Antonio (because when Shakespeare doesn’t know what to name something, it ends up being named Antonio. Swear to God.) It is clear that these boys know their stuff, and it’s delightful to be in on the joke. Don’t worry, if you’re not a crazy Shakespeare nerd you can still clearly and easily understand everything.

But while I love the Easter Eggs and enjoy the artwork, there’s some important stuff that just doesn’t work for me.

First thing’s first: the characters. We begin the story with Hamlet, who has lost his father, been haunted by his ghost (or something that looks like the ghost of Hamlet Sr.), has accidently killed Polonius through a curtain, and is getting shipped off to England with Rosencrantz and Guildenstern (who, hysterically, look an awful lot like Musketeers). But the Hamlet we meet in Kill Shakespeare is really different than the torn, suicidal dude I remember meeting in high school English class. Which… could be good or bad depending on your feelings about the Dane. I don’t mind this re-invention of Hamlet. He’s much more active than the original, although still plagued by his inability to make decisions and his Undead Daddy Issues, which I think is actually a pretty clever way to handle that.

Plenty of things happen which I won’t spoil for you, but we end up meeting Richard III, The Macbeths, Juliet, Othello and Iago. These characters bear some trace resemblances to their original incarnations, but mostly I found that they were just … more flat. Other than Othello and Iago, who have hints at some delicious horrid/wonderful back-story (but which we don’t really get the details on yet), I think that the characters generally just suffer for not having the depth of psychology that their full texts give them.

I really like the idea of people re-interpreting Shakespeare, re-inventing the stories and allowing them to live on through new re-tellings. And I do… like the IDEA of that re-invention. I think it’s one of the many things that has allowed the plays to live on so well: people feel free to create their interpretations and adapt the stories the way that they understand them—not the way that they were first staged or (heaven forbid) staged in the Victorian era. I even like that idea in practice. For example, 10 Things I Hate About You is one of my favorite movies, and Sleep No More was an eye-opening experience that I will always treasure. But in this particular work, I think that the spins don’t expand on the characters, but instead sort of reduce them to comic book archetypes—generally in a tough, gritty direction, with less heart and specificity than the originals.

I know. It’s rough to compare something to Shakespeare, and perhaps that’s unfair of me, but I think the feeling that I walked away with was just that I wanted more. I wanted more about each character, more complications for them, a more complex world, more blurring of the hero/villainy split, and more complex reasons for characters to want to revolt against (or save) Shakespeare. What’s there is good, but it didn’t quite give me what I had hoped it would.

However, this is only Volume I and we had to spend quite a bit of time getting acquainted with the set and finding out who our people were and what they were doing. It might just need a little time to let things develop.