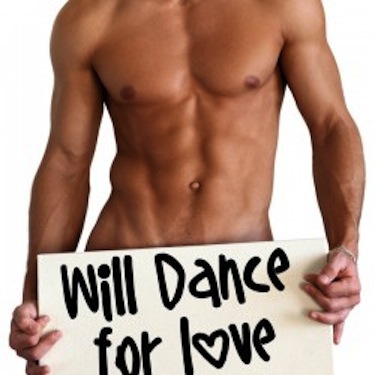 With Somebody Who Loves Me: A Gay Dansical

The summer air has begun to cool down, but With Somebody Who Loves Me, an independent production by Manzo Entertainment, is heating up the Tarragon.  A shortened version of the dance spectacle just completed a successful run at this year’s Toronto Fringe Festival, where the cast of eight dancers played to packed and enthusiastic houses at the Factory Theatre.

Frank Manzo’s first stage production is nothing short of a real gem – innovative both in terms of style and content – necessitating the richness of diverse tracks ranging from modern to “latin jazz-funk” to hip-hop, which aid in the narration of this “without dialogue” show.  The addition of a tap duet between exceptionally talented lead dancer Brenner Smith (Manny) and his onstage buddy Tim (played by Mitchell Jackson) felt a little out of place, though.  I should note here that the lack of verbal cues make character names – found in the program – almost irrelevant.  If it wasn’t for the presence of text messaging in the video clips screened throughout the piece, they wouldn’t even phase us at all.

Inspired by the popular motifs of musicals, Frank Manzo wished to create a dance piece with characters and story that are just as viscerally engaging as those of Broadway shows, without the songs or dialogue to distract from the power of the actors’ embodiment alone.  Too large a task?  Think again.  A true “renaissance man” in every sense, Producer, Director, and Choreographer Manzo is a Financial Advisor by day, “artiste” by night.  From humble beginnings in St. Catherines where he developed his dancing chops on the local competition scene, he moved to Toronto to study law and, subsequently, film.  And boy are we glad!

Without the dependence on dialogue for exposition, Manzo utilizes video clips to fill us in on back-story.  Videographers Kody McWilliams and Casey McWilliams, the brother duo behind Fourth Frame Films, have done an excellent job at capturing the key elements of each relationship on camera, to be weaved into the live action.  It is all in the details here, including the “one year guarantee” marking on the soccer ball found in a standard white Staple’s storage box, reflective of the dubiousness of modern relationships.  With incredible clarity, we know from the video at the top of the show that the box (later to be found by Manny) being anonymously filled with old belongings can be none other than that left behind by an ex-lover.  Transitioning into the live action, Manny literally drags this materialized burden alongside him until he can seek the comfort of his friend Dina (played by the exceptionally communicative Patrizia Gianforcaro).  In a parallel scene, Dina’s partner Lynne (played by the gorgeously expressive Jennifer Mote) will drag an identical box home after clearing her desk at the office job she was fired from.  And she will have similar troubles letting go of it.  But the clips have a larger function than that of providing clarity for what we don’t see happening on set.  If the stage represents life under a microscope, then intermediality provides us with yet another layer that permits us to enter deeper into the imaginations of the characters.  What we see in the videos are the hopes and aspirations of people who must learn to trust themselves and their abilities first, before they can fully acknowledge the supportive individuals in their lives to finally “burst out onto the scene” – literally.

Manzo succeeds in demonstrating that many of the personal issues which gay people face are no different than those of straight people.  However, he tackles a particular phenomenon, one which has yet to be dealt with so explicitly in queer theatre pieces: that of the “effeminate” man and his interactivity within the gay community.  He seeks to boldly examine whether or not the intolerance of certain strata of the community towards this type of guy is innate or self-imposed – a negative projection of their inability to deal with their own sexuality.  The visual “text” makes great use of Commedia dell’arte’s Rule of Three.  Manny’s first attempt at “dating” again finds him in a coffee shop making the gesture of an introductory handshake towards a man with sweet looks and alluring swagger (Edgar, played by Nick Tull).  A snappy lighting change.  We are taken into the imagination of Manny who engages in a sexy dance sequence to “No Apaguez la Luz” (Enrique Iglesias).  Another snappy lighting change and Manny discovers, upon making contact, a much more effeminate version of Edgar, dancing, hesitantly, to “Some Like it Hot” (Club des Belugas).  Manny is about ready to lock himself up in his room when Tim convinces him to go to a club where he meets LL (played by Ross Wirtanen) on the dance floor, of course.  The handshake motif ensues.  They do a hot and  sizzling performance to “Work It” (Nelly ft. Justin Timberlake).  Snappy lighting change and guess what?  Manny finds himself really dancing with a paradoxical street twink who, as charming as he might be, is just a little too salacious for Manny’s liking.  Third take.  Dina has finally convinced Manny to meet her friend, drag rock sensation Miss Ima Mann (played by none other than Manzo himself) after her / his performance at none other than Toronto’s own Statler’s Lounge.  I should point out that the wordplay makes this the only name with relevance.  Echoing his past letdowns, Manny tentatively shakes Mann’s hand.  He is quickly impressed, however, at how eye-catching Mann is, even without the wig and make-up.  And polite too.  Mann turns out to be Mr. Right.  The two are so compatible, in fact, that Mann succeeds in body training and miraculously convincing Manny to try out drag for himself.  That brings us to the final group number (feels like a musical right?) “I Wanna Dance with Somebody” (These Kids Wear Crowns).

Incorporating video into live theatre is sometimes unfounded.  Each of the intricate transitions are skillfully aided by Travis Lahay’s most efficient lighting design.  All the cues in this show can afford to be tightened, however, as there are often too many pauses for my liking when moving from video to live action to video.  With Somebody, without a doubt, has accomplished its goal of driving story through the power of dance.  The dynamic performances of all company members were crucial in realizing the challenging task of creating a “dansical.”  While this year’s Fringe festival was marked with many fantastic queer-themed productions, With Somebody breaks away from the standard coming out, coming of age, or HIV-laden shows to deliver what is like a masterclass in “originality” as much as “storytelling”.  Lucky thing you have a chance to see this “pleasant” little secret in its full scale reincarnation!

With Somebody Who Love Me: A Gay Dansical runs at the Tarragon until August 19.