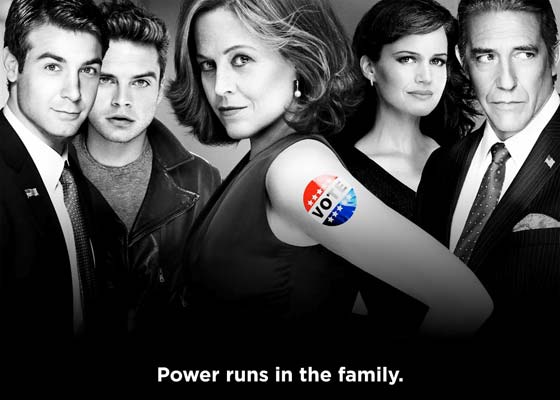 I’ve always loved Greg Berlanti’s work. He has a unique grasp on clever family drama and worthwhile character stories as well as never being afraid of honesty, whether it be in the form of grit, cheese, darkness or light. Though rarely a workplace-story writer, Berlanti has covered politics a lot before- with the late/great Jack & Bobby then again when Robert ran for President on Brothers & Sisters. That combination of a political mind with family drama credits makes Berlanti the Perfect person to make USA’s new miniseries Political Animals, and you can see his stamp all over it. The writing is fun and witty, the characters all humanized but intensely flawed, and there’s a sort of realistic idealism to the proceedings, a “life is full of crap… but I keep going” attitude. There’s also a gay character who is so far stealing the series, mother-son issues, brother-brother issues, a cheating father, elements of “the family business”, underlying (and not-so-underlying) feminism and major matriarchal themes- Berlanti trademarks if ever I saw them.

Political Animals is a sort of fictionalization of Hillary Clinton’s life with elements of the British royal family littered in, then juxtaposed with the story of a Washington reporter whose life parallels and foils that of our heroine- Secretary of State Elaine Barrish (Sigourney Weaver). Unlike Hillary, Elaine divorces her husband (Ciaran Hinds, a smarmier Clinton) when she loses the democratic primary to Adrian Pasdar’s Paul Garcetti. Hinds and Pasdar are charming as the past and current Presidents but aren’t doing their real-life inspirations any favours (Hinds plays pseudo-Clinton as clever and manipulative rather than whip-smart and approachable; Pasdar’s more compromising and sneering than Obama is, at least in my mind). Weaver is great as prickly, defensive and well-meaning Elaine- a particularly well drawn and far more sympathetic, if sometimes unlikable, character.

Her grown sons are played by the always-adorable James Wolk and the always-excellent Sebastian Stan as a sort of William & Harry duo of succession and rebellion. The “William”, Douglas (Wolk) is his mother’s chief of staff, towing the behavioural line in as many ways as he can manage, including in his selection of seemingly perfect (and secretly bulimic) fiancee Anne (Brittany Ishibashi-perfectly pleasant, interestingly cold).

But, as is the case with the British royals, it’s the non-successor who proves the most interesting. TJ (played by Sebastian Stan) is the first openly gay Presidential child, a piano prodigy, and a struggling drug addict (Berlanti’s all over this one with echoes Kevin and Justin Walker as well as Ephram Brown). Stan is one of the great, underrated young TV actors of his generation and he draws on the similar character he played in the sadly short-lived Kings to characterize the golden-hearted black sheep. He strikes the perfect balance of femininity that convey’s TJ’s comfortable sexuality without coming close to being a stereotype of affectation, and his struggle with drugs is already heartbreaking- filled with guilt and vulnerability. TJ’s relationships feel deeply developed even in just the first of six episodes (the TJ/Elaine relationship is particularly interesting just from a beautiful scene where he picks out a dress for her to wear to Douglas’ engagement dinner) and Stan’s good enough at the piano to pull off the coulda-been angle well (at least I’m assuming he’s really playing, since his mother was a piano teacher, according to Wikipedia). He’s also just really likable and enigmatically engrossing, which are incredibly helpful qualities if you’ve only got 6 total hours to make us care about your arc.

The final important piece to the puzzle is Carla Gugino as Susan Berg, a harsh reporter who means to be analytically honest when she’s being harsh. Gugino is likable enough to pull off a character who is at once Elaine’s personal antagonist and one of Political Animals‘ principal protagonists. The deceptively sweet Dan Futterman plays Susan’s editor/boyfriend whose betrayal sets off an episode one frenzy and, eventually, a reconciliation between Susan and Elaine that is the pilot’s only particularly forced moment (there’s some stupid feminist metaphor involving elephants that made me audibly grown). Moving forward, it’s tough to tell what role Susan will play since she began as a sort of ‘Elaine Elaine doesn’t like’, a nod to the lack of empathy many critics, specifically women, displayed towards Hillary during the 2008 campaign- damning her for such unrelatable things as ambition and frumpiness.

Political Animals is a family drama; it’s not a political drama. I mean, content-wise it’s a little of both, but tonally it’s a family drama. Family dramas are generally soapier, usually more heavily serialized than political dramas- it’s important to know that going in. Berlanti’s created a series that is incredibly successful within its own tonal context, but it never pretends to be an important social commentary or deep investigation of human nature. Political Animals is fun, engrossing, superbly acted and meaningful on a character level, but if you’re looking for a life-changing series, I’d suggest you not look on the USA channel.