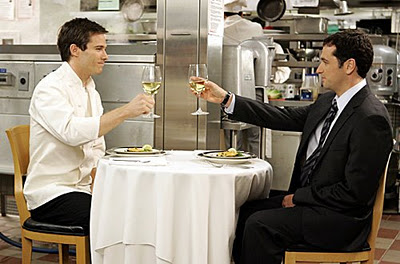 My Ode to Kevin and Scotty

Last night there was a Tivo scene. It was one of those scenes that you save forever on your PVR or your DVR or your Tivo or whatever fancy TV contraption you have. It was a scene that you play over and over again. It was a scene that makes you buy the DVD box set just so you can watch those moments again even if someone accidentally erases them from your PVR/DVR/Tivo. It was the final scene of last night’s Brothers & Sisters on ABC at 10pm.

It is no secret that Kevin Walker is my favourite character currently on TV. His heart of gold gets ripped to shreds every time he works up the courage to wear it on his sleeve and yet he continues to fight to break down his steel walls because he’s terrified of being someone he doesn’t want to be. He’s cold and closed off, bad at relationships, paranoid, stiff, insecure, cowardly, and selfish. He’s also loving and generous and brave. He would do anything for his family and wants little more than to be loved. Kevin Walker brings a humanity to the television landscape that is uniquely honest. He is a walking contradiction, and in being so he makes perfect sense.

Early on in the series there entered a man. A man named Scotty. From their first confrontational encounter the chemistry between the two was palpable. Kevin hated what Scotty represented. Scotty pitied Kevin’s insecurity and coldness. Naturally, they fell in love. Naturally, there were too many obstacles in the way of said love. Naturally, Scotty disappeared from Brothers & Sisters.

Kevin had a series of boyfriend after Scotty and with each one he learned a little bit more about being the person he not only wanted to be but the person Scotty had always believed he could be.

Scotty returns to the show. A stroke of fate, some may say, when the actor playing Kevin’s then boyfriend Jason was cast in another show and a character was needed to fill his void. So Scotty returned. Just friends at first, Kevin and Scotty both began to see how the other had grown into a fuller and brighter version of their former self. Personal obstacles that had once stood in their way lessened with the maturity that time had wrought, and Kevin and Scotty tried again.

And as for the Tivo scene?

Kevin and Scotty are engaged!

Kevin, after dealing with his hysterical family in the throws of some of their most dramatic hysterics yet, returns home to Scotty, who has replaced all the light bulbs with eco-friendly ones. Kevin, in his beautifully understated and incomparably romantic way just looks at Scotty and finally truly recognizes everything he wants in life. The rest is beautiful, heartrending, tear inspiring television history.