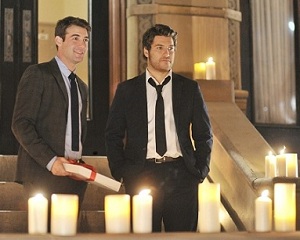 Rachael’s already talked about the phenomenal Valentine’s Day episodes from New Girl, How I Met Your Mother, Up All Night and (my personal favourite) The Middle. But the schmoopiest holiday seemed to reach every show on the air this year, so I thought I’d add a few to the list:

E) Glee. It’s been weeks since Glee was any good at all (my recovery time after the travesty that was Michael Jackson week was not short) but I really liked the Valentine’s episode. The much-hyped appearance of Rachel’s dads was fine (they’re cute, they’re not all that interesting) and I enjoyed their parental handling of their batshit daughter’s latest misguided life plan (marrying a neanderthal), but I was happy when those scenes were over, the marginalization of Rachel/Finn is the best thing the show does from time to time. In the subplots, I was glad to see Damian McGinty get something to do, even if it did involve courting a crazy person (at least he sang one of my favourite songs- you can’t go wrong with Michael Buble); if he’s not actually getting deported (which he shouldn’t be, they should absolutely keep him), then the tears were a bit much, but tears were very prevalent in this episode- including from Mercedes’ cuckolded tough guy boyfriend, which was offputting (while I never bought her and Sam, they’ve been delivering it well, and you can’t go wrong with a spookily timed “I Will Always Love You” in the hands of a great belter). Santana and Brittany were cute, as were Mike and Tina (I really do love Harry Shum Jr) and I always appreciate a cameo from my beloved Max Adler (as Karofsky declaring his understandable but Terrible Idea love for Kurt). Blaine returned from the shortest recovery period/Broadway stint ever (though it was nice to have him back) and we got an entire episode wherein those taxing teacher storylines didn’t appear at all- so refreshing! (Rachel also didn’t sing a single solo- more refreshing!). But the crux of the episode was in the appearance of Glee Project winner #2 Samuel Larsen. I wasn’t a huge Samuel fan on the reality show (stylistically, there are Damian people, and there are Samuel people) but as the teen Jesus Ryan Murphy’s been dying to write, he’s really pretty perfect. The camera loves him, he’s much more at ease on screen than Damian is and his vocals sound great. The episode was better written than the usual but so far I’m liking Joe the Christian rocker. And as lovey-dovey as the episode was, they still made a point of mocking Finn and Rachel’s gross PDA and I do love a raucous episode-ending Love Shack singalong any day.

F) Raising Hope. Jimmy and Sabrina finally got together in the adorable Valentine’s episode. After a year and a half of inaction, Jimmy stumbled (read: was pushed by his FANTASTIC mother) into a plot that involved hiring Ashley Tisdale to pretend to be his girlfriend and make Sabrina jealous. It worked, she broke up with Wyatt, and Jimmy was stuck knowing that he’d be starting out with a massive lie. So, in a stroke of sheer awesome, he writes a play for Ashley Tisdale’s improv troupe to perform for Sabrina when he takes her out for Valentine’s Day. It’s a here’s-the-truth-sorry-I-lied-I’ve-always-loved-you recap of the series highlights so far that proves a game changer. It’s a big move for the series to put them together, here’s hoping the episode’s earnest sweetness isn’t overshadowed by impending disaster.

G) Gossip Girl. Gossip Girl is all sorts of crazy right now, as it always is when the intolerable Georgina is in town, but what it boils down to is that Blair is trapped in her marriage to Louis but in love with Chuck, while Dan plays her hero and pines in unrequited love for Blair and dodges Sabrina’s advances. Nate’s also courting the real Charlie Rhodes (as opposed to Ivy, the actress Carol hired to play Charlie to steal trust fund money) and Georgina’s taken over the titular website, but the main intrigue lies with the love pentagon (which, for clarity purposes, we’re leaving Nate completely out of, despite his previous relationships with Every Single Woman On The Show). Any viewer with a brain knows that any Blair relationship that’s not with Chuck is little more than time biding until their end-game gains more torturous steam, but we’re continuing this Dan-Blair charade anyway. I love their dynamic as a “oh, they do actually have a lot in common” twist, but couldn’t we have left romance out of it? I get throwing Serena around the love-life pool, but the mythology of the series has set up Blair’s soulmate. It’s kind of an interesting character note to watch Dan, the writer, pine for Blair to abandon the poetry of her relationship with Chuck, and I do enjoy how the Louis predicament is shaking out, but the longer this goes on, the more cringe-worthy it becomes for Dan and Serena and their general “why won’t you love me?!” hopelessness. It wasn’t a particularly cheerful Valentine’s day on the upper east side.

H) Grey’s Anatomy. With the death of Henry, Grey’s Anatomy has lost the funny. And since the well-executed drama of seasons 2 and 3 (with the occasional well-executed dramatic bit, like the shooting), the funny has been where Grey’s excels. So I’ve been investing a lot in the Jackson-Mark relationship, the best friendship to develop since Callie-Mark, because despite whatever Lexie drama lies between them, they’ve still got the funny (and Jackson is so above the Lexie drama anyway, choosing his mentor over the girl). Obviously, then, Jackson crashing Mark’s babysitting session to cook him steaks was my favourite part of the decent but standard Grey’s Anatomy Valentine’s Day. I’m not buying Bailey’s relationship with the super-hot Jason George and I’m over the chief’s woes about Adele (everyone woman he loves gets Alzheimer’s- really?) but I love everything to do with April Kepner, and am all for a happy incarnation of Mer-Der. Lexie’s romantic troubles are fine but Owen and Christina’s are far more fascinating (I appreciate that he can’t just get over the abortion issue- it’s nicely complicated,but they should for-sure split up) and, as usual, I’m more invested in Karev than everyone else (even though all he did last week was help out a couple of love-struck 10-year-old); he’s so adorable in his grumpy little way. Oh, and I love Teddy, always have, but the chances of her actually never being Owen’s friend again are pretty slim- she’ll be over it by next season, so I wish she were being less of a hard-ass about it now, it’s weakening her credibility (though I do get the “irrationally heartbroken” thing she’s playing).

I) Happy Endings. The Valentine’s episode was all about comical disaster as one by one each member of the wackadoo group’s plans fell through. Alex, having been mistaken for a hooker on her way to a sketchy party, dedicated her night to helping other people find love, which only sort of worked. Dave and Penny got screwed by the notion of “the window” of time in which you’re not supposed to break up with someone too close to a holiday and Jane and Brad’s night was ruined by an overdose of laughing gas he got at the dentist. It was a decent episode that ended with the unlikely Max scoring the only great Valentine (the impossibly cute James Wolk as his dashing ex Grant), which led right into this week’s absolutely superb episode. Playing off the inescapable fact that charming, impressive, pulled-together Grant is entirely unsuited to the lazy, goofy and crass Max, the episode was all about Max’s friends fighting over getting to be Grant’s new best friend- which is a thing that happens, I battle every day with my brother about my right to be friends with his amazing girlfriend- it was hilarious and truthful and fun (except for Dave, who’s always annoying), in the best of Happy Endings tradition.

J) 30 Rock. Since it’s long-awaited return, 30 Rock has been so sweet that I didn’t even notice it was twice as long as usual for its supersized Valentine’s day episode. While the show is surely past its prime, the additions of James Marsden and Kristen Schaal have infused some much-needed new blood into the critical darling. The five plots that ruled the episode were Liz braving the relationship-killer that is IKEA, Tracy and Frank giving Lutz bad pickup advice, Kenneth training Hazel (Schaal, superb as a new page turned Liz-stalker), Pete coaching Jenna through a live performance and, the best thing about the episode, Jack fighting his twisted attraction to Avery’s mother (Mary Steenbergen, far more age-appropriate for Alex Baldwin than Elizabeth Banks). The show is finding its footing again, which I’m always glad to see.

K) Parks & Recreation. Over on TV’s best comedy, Valentine’s day brought the Pawnee Valentine’s Dance, which was awesome. After a successful February 13th “Gal-entine’s Day”, Leslie decided to fix Ann up with candidates supplied by her office-mates; April brings the always-stupendous Orin and Jerry accidentally hires as prostitute, then April sets Ann up with Tom because, in her own way, she really was trying to help- it was kind of sweet, in a very April fashion. Chris’ crippling depression over his recent breakup with Jerry’s daughter made for a fantastic subplot with Rob Lowe looking like he was having more fun than he’d had in years DJing the dance with funeral marches. But, as usual, it was Ben who stole the show as he attempted to solve Leslie’s uber complex Valentine’s scavenger hunt. With the help of Ron- making history with his excitement about solving the riddles- and the delightfully dopey Andy, the hapless Ben unscrambled the better part of nearly 30 clues to find Leslie (and she’d been nervous she’d made it too hard!).  It was cute and wonderful and so perfectly them- and there’s nothing on TV I love more than them.

Valentine’s Day this year was a perfect week of love-struck TV happiness. And I wouldn’t have it any other way.