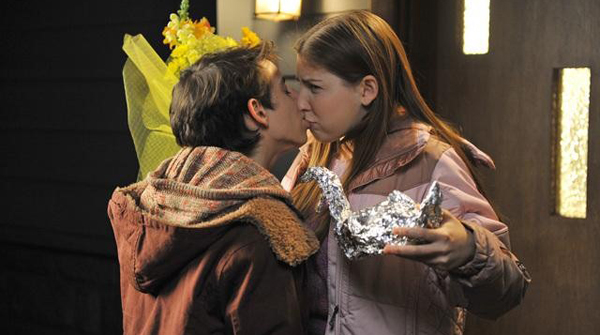 Exhibit A: New Girl. This show has been getting consistently better with every episode, and this week’s plot-driven extravaganza is one of the best of the lot. The Schmidt-Jess-Cece A-story ruled the show, playing out like an old school farce. The Nick subplot with Julia was fine, and the Winston storyline wasn’t entirely devoid of charm, but it was the main, hilarious front story that carried the day to victory.

Exhibit B: How I Met Your Mother. Regardless of how you or I feel about those last five minutes (because OH BOY), this week’s HIMYM packed a laugh-filled punch. I’ve been seriously enjoying the emotional throughline on Robin this season, and while I sincerely hope that the show isn’t going to make me want to eat these words, I am looking forward to seeing where it all brings her. The show effectively used the Valentine’s Day backdrop to set up an endearing romantic storyline, AND a character-driven sex comedy for Barney and Ted. It was “epic- wait for it- dary. Wait, that’s not right. What do I normally say?”

Exhibit C: Up All Night. I don’t normally write about this perfectly pleasant, ridiculously well-acted NBC sitcom because, well, I’m still kind of bitter about Community. But last week’s episode managed to seamlessly blend the Chris/Regan storyline with the Ava storyline, making for one of the funniest episodes of the series to date. If it took a made up, Hallmark Holiday to allow this show to crystallize its formula, then bring on the cheesy pink paper and diabetes-inducing candy.

Exhibit D: The Middle. This show is consistently not only one of the funniest, but the most true-to-life shows on the air. And Mike and Frankie are the anchor of the show. But it’s the kids who really shine in this Valentine’s Day offering, with Sue’s fantastically strange first boyfriend, Axel’s surprisingly death-filled school project, and Brick’s perfectly poignant ending speech. But what keeps this show from dissolving into schmaltzy family comedy crap? The fact that Axel stole Brick’s speech, and probably got an A. Just like this episode (if I gave grades).