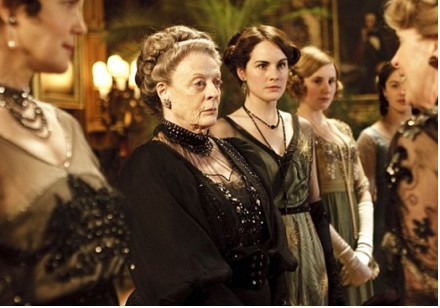 The Tongue, Spine, and Heart of Downton Abbey

Downton Abbey has become a bit of a phenomenon among a certain brand of television fanatic. Paced like a soap opera, with enough drama to spare, Downton Abbey combines a heaping of envy-fueled lifestyle porn with gripping human drama, all set in a distant enough past to make the often uncomfortable political and social allegories feel safe. That may sound dismissive, like the type of description a less articulate version of Maggie Smith’s Countess Dowager would give to a well-meaning but ultimately defunct social climber, and maybe it is. Downton Abbey is, after all, purely pleasurable viewing; it neither challenges the form nor brings it to any unforeseen heights (primetime soaps have been hitting the same dramatic highs for years, and the art of the stiff-upper-lip-British-put-down was perfected in Jane Austen). And in its second season, especially, the show moved at such a breakneck pace it was easy to get whiplash, and occasionally indulged in dead end bits of drama that stalled the show to an almost halt. But it is remarkably addictive and incredibly engaging viewing, none the less, and anchored by solid performances and remarkably nuanced characters.

The politics of Downton Abbey, have been eviscerated much more articulately than I am capable of doing here, and you’re welcome to go search out those pieces for a more in depth look. The creator of Downton Abbey, Jullian Fellowes, is a well-known advocate for the particularly dated bit of British classism that is the aristocracy. Since Downton Abbey takes place at a time of huge social upheaval (its first two season span from the Titanic sinking in 1912 to the end of WWII and beginning of the roaring 20s), it is necessarily a time of huge conflict between ideas. The borders between the wealthy “upstairs” of the house and the servants “downstairs” whose lives depend upon them are weakening, and the war only serves to weaken them further. On top of that, the role of women within the home and in society at large is expanding, and the three Grantham daughters represent three different paths towards feminine self-actualization.

But the show is not only a representation of these tumultuous times. The goals of the reformer are in many ways contrary to what we, as the viewers, want from the show. After all, any true upsetting of the classist status quo would undermine the very system that has created all this lovely and wonderful drama for our characters. In that way, Downton Abbey is in the strange position of simultaneously arguing for the universal rights of its characters AND condemning those who want to completely overthrow the system. Looking at it kindly, Downton Abbey is interested in gradual change. Looking at it less kindly, it is nostalgic for an era that kept most people in their place serving the privilege and “deserving” few.  Given Fellowes’ connection with the aristocracy, it is easy, to see Downton Abbey as his argument for the genteel patriarchy of the aristocracy. After all, Lord Grantham is a kind and fair man, the type of man who fights for a servant to be released from jail and who consistently works to give his servants the best lives possible. What could be wrong with such a man being in power, especially when the argument for egalitarianism most often comes in the form of the scheming servant Thomas, whose ideas above his station lead to all manners of mischief?

I ultimately thinks that’s a simplistic reading of the show, but I can understand the viewpoint and am certainly incapable of completely shutting it out. Mostly, though, I can ignore the potential politics of Downton Abbey. In fact, I actually find the show’s determination to show all sides of the sweeping march of change refreshing. I read a lot of criticism of The Help this summer. One of the main ones is the way that it solely showed the perpetuators of an unjust system as purely cruel and awful human beings. In that way, Downton Abbey actually shows the ways that good people served to maintain a system that kept a lot of people down.  Taking this view, we can instead see the march of social change encapsulated in the daughters, rather than in the servants. If you choose to view the show this way, then the youngest daughter, Sybil, represents a huge argument against strict autocratic lines, and in favor of expanding one’s worldview. The conflicts of the other two daughters, Edith and Mary, throughout the show demonstrate the way that the aristocracy changed without even fully admitting to itself that it had changed.

But enough about the politics of the show. You come to Downton Abbey for the lush sets and period details, and you stay for the drama. The breakout star of the show is undoubtedly Maggie Smith’s Countess Dowager. She provides laugh out loud moments despite the time’s often clipped language (especially in the Christmas Episode in Season 2, where she responds to one character’s assertion that she will never see him again with a terse and perfect “you promise?”). Smith is at her very best as Violet, whether she’s taking down unsuitable opponents or opening up to the agony of the scullery maid crying at her fireside. In a less capable woman’s hand, the Countess Dowager could be a shrew of a woman, trying desperately to fight the oncoming tide of change with wit and scheming. Instead, she is an often-wrong, mostly-right-hearted woman who has worked hard to earn her place within her family, and who cares deeply for the happiness of those around her. That Smith brings her typical wit and twinkle to the role is just a bonus.

The other figurehead of Downton Abbey is Lord Grantham. As portrayed by Hugh Bonneville, Grantham is a good man often confounded by the times in which he lives. As previously noted, he thinks with his heart more often than his head, and his determination to do what he thinks is right regardless of how confused he is at any given moment causes a good deal of turmoil. If Violet is the biting tongue of Downton Abbey, Grantham is its spine, holding the show upright and attempting to guide it where it needs to go.

But the true heart of Downton Abbey, and the reason I keep coming back to the show, is Mary Crawley (played by Michelle Dockery). This woman should be given all the Emmys in the world. In many ways, Mary is the worst character on the show, especially in the beginning. She starts off the series by refusing to properly mourn the loss of her cousin/fiancé who died aboard the Titanic. She swiftly dismisses a new cousin and heir to the Grantham name, Matthew, because he has the audacity to live in the city, work as a lawyer, and find all the ridiculous traditions of the landed aristocracy absurd. Then, she beds a Turkish diplomat just because he’s hot, and when he dies, enters into a series of lies and hijinks to protect her name and birthright. These hijinks eventually encapsulate everyone in the series and continue straight through the season finale of Season Two. She is, in many ways, an unrepentant social climber who remains unfeelingly committed to her English idealism.

But Dockery manages to make Mary’s fall from grace, romance with Matthew, and attempts to make amends in her life so endearing and complicated that it rescues Mary. The character, throughout her eight year character arc, makes many stupid, snobbish, and destructive decisions, but she is trying to figure out right from wrong. Fellowes, as head writer on Downton Abbey, may struggle with a lot of the politics, but he hits Mary’s notes exactly right. She remains attached to her life, while she yearns to be free, and her interactions with Matthew throughout the series spark with intensity. The ending of season two was eight years in the making, but it feels perfect for the two characters.

Mary is a complicated individual with a complex view on the interactions between the poor and the rich, the new and the old, and the reformer and the loyalist. Since she is the heart of Downton Abbey, she can also be said to stand for the series itself: often frustrating, always beautiful, and utterly charming.