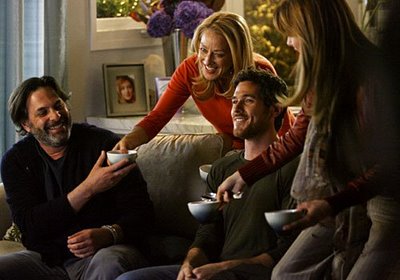 One Walker leaves, another shows up (not exactly a fair trade, but not devastating); one marriage falls apart as another grows stronger in its first year and yet another is in the works; two family members quit Ojai, another two are fired, a different two are hired and the first two return;  two matriarchs find love; there are two medical emergencies and one baby born: such is the world of Brothers & Sisters‘ third season, a solid outing but not its best.

Let’s start at the top, with the best things about the season. Kevin and Scotty, always a highlight of the series, thrived even more after their wedding last May. Challenged with Scotty’s conservative parents, Kevin’s intolerant bosses, returning exes and Walker drama up the wazoo, the pair made it through with admirable resilience and a whole lotta love.

Another highlight of the season was the return of Ken Olin as Rebecca’s real father, David. An interesting love interest for Holly, a grounding force in Rebecca’s life and an all-round likable character, David is exactly what the Harper family needed to keep up with the dominating Walkers. The turn that the Elizabeth’s paternity issue took made for some fascinating character growth for all the Walker boys (Kevin especially) and interesting repercussions at the season’s end. Both Nora and Sarah found new ventures that allowed them to find themselves free of the William shadow; Justin found his calling in medicine; Julia’s goodbye episode was exquisitely written; and the season was rife with tension-cutting comedy from the Greenatopia crew, a guest starring Dave Foley and even the Walkers themselves.

As for the teeter-totter aspects of the season, there were many things that were a mixed bag of good and bad. Firstly, Justin and Rebecca’s relationship, though icky if you give it too much thought, was really quite sweet in the end and their engagement in the final episodes made me unexpectedly happy.

Nora’s love life, though improbable and a little strange, made me happy too, if only because it kept her from butting in to her childrens’ lives quite so much. Kitty’s quest for motherhood came on a little suddenly but the tensions that Evan’s birth caused in her marriage made for some interesting drama. And while I disagree with the show’s eagerness to split up marriages (Kitty and Robert began falling apart less than a year after their wedding, marking the third Walker marriage failure in two years), I always appreciate a guest stint from one of my favourite TV actors (Matt Letscher, always charming and empathetic). The finale left Kitty just missing Robert’s departing helicopter, here’s hoping she intends to fight for him, who wouldn’t fight for Rob Lowe? This season also saw Kevin cross the aisle to work as Robert’s communications director in Kitty’s place, an interesting if not enthralling development.

And now for the bad. The ridiculousness that was Tommy’s foray into fraud served mostly to minimize Balthazar Getty’s role in the show. And while Tommy may be the least interesting Walker, the loss of Julia and Elizabeth paired with the terrible plotting surrounding his departure makes his loss mourn-worthy. The only other low point of the season? Ryan Walker. Boring, unengaging, off-putting and tedious, Ryan seems like a cheap plot device created to develop tension, force plot and remind the audience that William Walker was not a good guy. Unfortunately, with Saul’s determination to make amends to him and the fact that there seems to be no question about his paternity, Ryan will probably be with us for quite some time.

But problems aside, Brothers & Sisters remains one of TV’s most engaging hours every week, populated with some of the greatest characters ever written, and this season moved many of them in exactly the right direction. As for Ryan, well… let’s hope for more screen time for Kevin instead.

FINALE GRADE: A-
SEASON GRADE: A-