In Awe of the Majesty of Kings 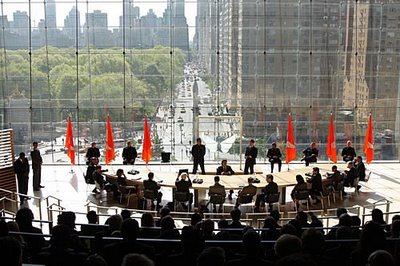 The kingdom of Gilboa is where the future of TV should be headed.

Programs like NBC’s new drama Kings (set in the fictional land of Gilboa) represent, in my opinion, what television shows should strive to be. Though it’s a long shot to remain on the air because of sadly predictable low ratings and an unavoidably high budget, Kings is TV firing on all cylinders. It makes no excuses for its medium, proving that the small screen can contain every bit the majesty of the larger, silver one.

With a central story rooted in the Old Testament (the story of King David), Kings has, right off the bat, an impact of (forgive the pun) biblical proportions. But beyond its tome-ic roots, the show has a grandiose nature that seems almost Shakespearean.

Echos of Prince Hal exist in the seeming playboy prince Jack who feels like his father’s second choice; the power struggle between King Silas and his brother-in-law mirrors many a history play (Richard III and Rivers perhaps?); there has been talk of banished relatives, illegitimate sons, land division, o’er hasty romance, the division of classes, waring kingdoms and descents into madness. And there are two members of the royal guard who serve as a modern day Dogberry and Verges of sorts. Even the language has a poetic fluidity to it, feeling, at times, like a subtle iambic pentameter.

Majestic style aside, Kings may not be long for this world, but it has plenty of weighty things to say about it. The corruption of power, misuse of the media, morality of war, nature of fate, dangers of politics, manipulation of perception,… the very first episode speaks to them all. In one of the pilot’s most poignant scenes, King Silas tells his son Jack that he cannot be the way the lord made him if he is to become king (Jack, by the way, is secretly gay). Later, the king is threatened by his brother-in-law, who uses the threat of economic decline (culture of fear- ring any bells?) to blackmail the king into needlessly perpetuating a war (a war that disturbingly resembles our current one).

Young David (an outsider among big city high society) struggles with serving his king, himself and the memories of his father and brothers all at once, while resisting the corrupting forces of the capitol city. There are tensions mounting between representatives of church and state, issues of divine right and the moral authority of kingship abound. And a romance plagued with unknown secrets is blooming between David and the Princess of Gilboa.

All this within the trappings of exquisite costumes, lavish palaces and sweeping landscapes. Classical score, epic wide shots and sprawling cityscapes top off the majestic package that is Kings. Tonally, thematically and technically, Kings takes television to a new level. This show reminds us that the great, artistic and inspiring aren’t limited to the cineplex.

4 Responses to In Awe of the Majesty of Kings