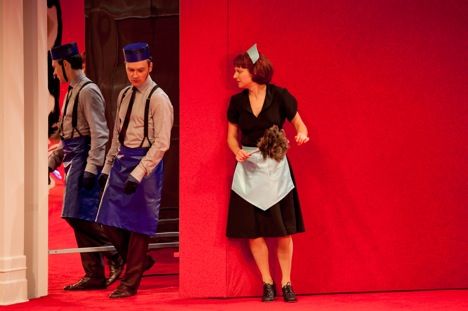 CanStage: The Game of Love and Chance

The actors are hyperactive and goofy  as they play out their story of disguised aristocrats sizing each other up. The acrobatic Gil Garratt was the audience favourite as Arlequino, the valet who puts on buffonish airs while posing as his master. His match is Lisette (a well-timed Gemma James-Smith putting that obnoxious airy voice to far better use than in The Glass Menagerie), a mousy-come-confident maid who poses as her mistress and catches the affections of Arlequino (whom she thinks is Dorante, his master). The real Dorante is played with masterful charm by Harry Judge. He and Trish Lindstrom (at her best AGAIN as Lisette’s too-clever-for-her-own-good mistress Silvia) nail the tricky element of inescapable good breeding, even when dressed as a valet and a maid.

The class disparaty, while awkward in today’s political climate, creates much of the comedy and is the centrepiece of the tricky plot. The arranged marriage of Dorante and Silvia is a product of their aristocratic upbringing and the posturing of their servants when given a taste of power is one of play’s  bigger laugh-getters. Dorante and Silvia are the masterminds behind both plans to switch places and their dialogue is bright and witty; Arlequino and Lisette, for their part, provide easy, broad humour. Personally, I was far more taken with the high-headed banter of the supposed “servants” (aka Silvia and Dorante) rather than the physical gags of Lisette and Arlequino (posing as Silvia and Dorante) but that’s the beauty of The Game of Love and Chance. The comedy runs the gamut, hitting on every imaginable taste. Add Zach Fraser as Silivia’s almost Rupert Everett-esque brother Mario-  swaggering around, causing problems and eating candy- and no matter your comedic niche, The Game of Love and Chance Will find a way to make you laugh.