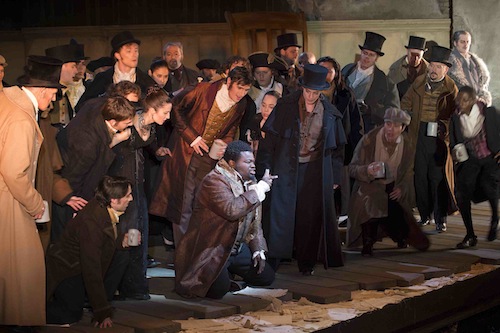 The Tales of Hoffmann at the COC

Last week I did nothing but go to the theatre. I saw tons of stuff from operas of Wagnerian length to 90 minute farce to epic dance that brought me right back to a childhood obsession. The productions run the gamut from intolerably boring to utterly thrilling.

First up was The Tales of Hoffmann presented by the Canadian Opera Company. As usual when it comes to COC productions, the set was beautiful and the voices soaring. I thought Lauren Segal was a little thin on her vocals as Hoffmann’s Muse and John Relyea’s myriad of bass villains melded together as a two dimensional bore, but the rest of the cast was spot on. Two of the three women who take centre stage in Hoffmann’s unlikely “tales” shone the brightest: Erin Wall’soulful Antonia, and , most notably, Andriana Chuchman who added great timing and physical comedy to her insane soprano as the show-stealing automaton Olympia. Yes, there’s an automaton, with whom Hoffmann earnestly (read: idiotically) falls in impetuous love.

All of Hoffmann’s tales are of earnest idiocy and impetuousness. They string together incredibly loosely and serve mostly to inform a weak frame device wherein the poet Hoffmann loses the girl he loves because the manipulative Muse drives him to drink as he recounts his tales of lost love (and the women he thinks are all pieces of his beloved Stella). It’s a dumb story at best that is fueled largely by the cat-fight instinct of a jealous woman and the overbearing cliche of the tortured alcoholic artist. Jaques Offenbach’s score is neither unique and provocative enough nor beautiful and stirring enough to carry the piece on music alone on top of being unendingly repetitive. It takes Offenbach and librettist Jules Barbier 3.5+ hours to tell a remarkably simple story. The second act (of 3 plus prologue and epilogue) is the story of Hoffmann’s fiancee Antonia who will die if she sings but is tricked into singing anyway and, thus, dies. That story, which took me one sentence to describe, takes an entire hour to unfold on stage. It’s torturous. I know it’s not common opera practice to do so, but one thoughtful music director with a red pen ready to make some judicious cuts in Offenbach’s score could literally make all the difference to a production that was otherwise fairly well executed.